This month’s Spice Guide sure is a spicy one – cayenne pepper! Come learn more about where it’s from, how to use it & what to pair it with. I’d love to hear about how you use it in your kitchen too! 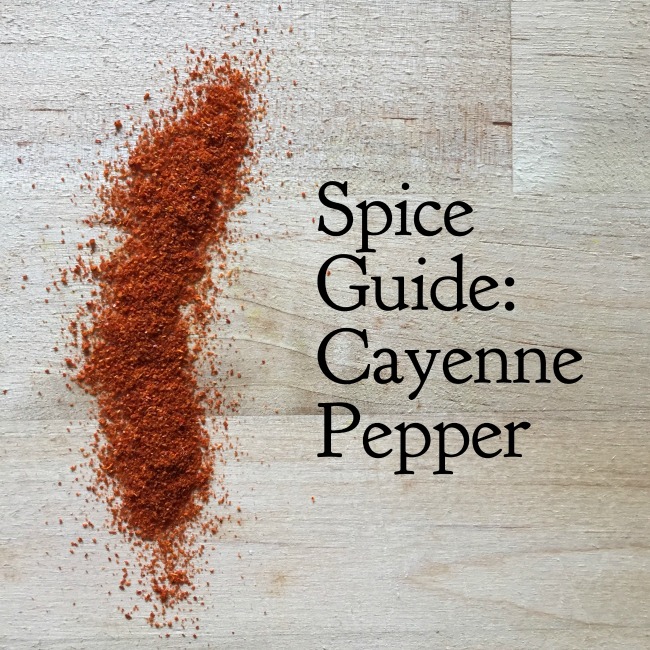 Cayenne is a red pepper that originated in French Guiana and then spread by Spanish explorers in the 15th and 16th Century. It’s also known as Guinea spice or red pepper and is related to bell peppers, jalapenos and paprika.

It is most commonly used in powder form, but can also be found as flakes, whole fresh or dried chillies and even an oil.

It doesn’t have a dominant flavour of its own, making it an excellent addition to dishes where you want heat but not overpowering flavour. Start with a very small amount – 1/8th – 1/4 teaspoon in a stew for example, and build from there to avoid spice overload!

It really pairs well with all meats and vegetables, as well as eggs, cheese, pulses and can be used in everything from soups to sauces, rice dishes and pastas. It even goes well with chocolate and coffee!

As it doesn’t have a whole heap of flavour on it’s own, cayenne pepper can really be paired with pretty much any spices. So of the most common pairings though include:

For a slightly different way to use cayenne pepper, try it as a homemade popcorn topper!

Pop your popcorn your favourite way (I do it on the stovetop) then sprinkle with a combination of:

I hope this spice guide to cayenne pepper was helpful!

I Spy Plum Pie is Liz, an early 30s kiwi-born, Melbourne raised girl who is passionate about the environment and sustainability, food, exploring and learning new things. Join me on my journey to a happy, sustainable life!
August 19, 2017 by I Spy Plum Pie (admin) | 0 comment