As a Melburnian it’s probably no surprise that I’m a big fan of coffee, however there’s one form of coffee I have chosen not to use and that’s pod coffee. I know this might be a contentious opinion, and I can definitely understand the appeal of pod coffee – it’s cheaper than going to a cafe, better than instant coffee and much easier than fancy machines – but even all that isn’t enough for me! So today, I wanted to share with you why I don’t use pod coffee.

This doesn’t mean I’m passing judgement on people that do drink pod coffee, far from it! I just thought it was worth sharing my thoughts on the rise of pod coffee and the impact it’s having on our environment, in case it helps anyone currently thinking about buying a coffee machine. 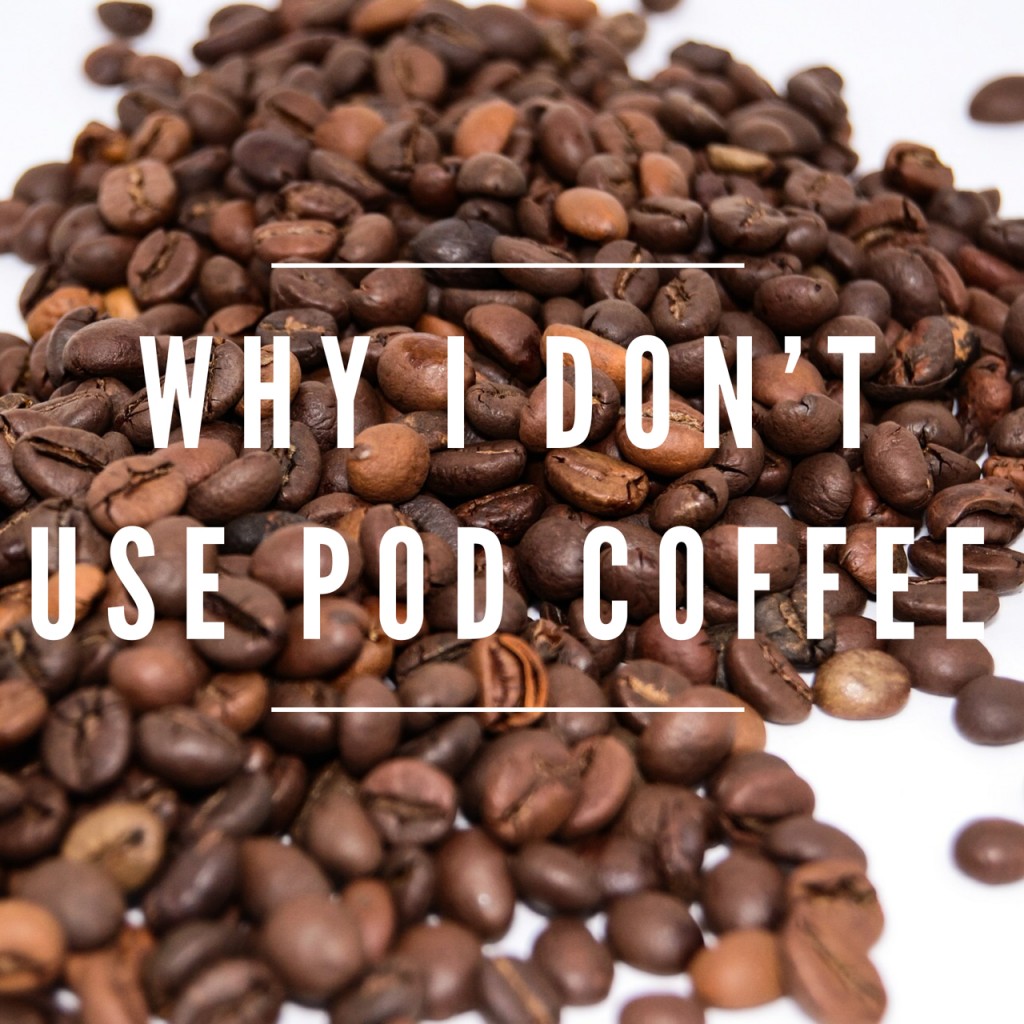 Not that many years ago coffee pods didn’t even exist, and now we’re churning through billions every year (28 billion nespresso pods were reportedly sold worldwide in 2013, yes you read that right!), and the number is growing rapidly every year. Australians are apparently using between 2.5 – 3 million pods every single day, which adds up pretty quickly!

For me, there’s two problems with this, their production and their disposal.

Coffee pods are generally made out of either plastic and/or aluminium, both of which require energy to produce. Aluminium is particularly energy hungry, requiring nine times the amount of energy to produce as steel, and given how many are being produced that equates to a lot of additional energy usage.

There are also questions about the sourcing of the coffee that goes into some of these pods, with not all of the brands using certified fair trade coffee. This means that there is a lot of coffee being produced for these pods in circumstances where we can’t be sure the farmers are getting paid a fair price, and are being treated ethically.

A large proportion of the coffee pods being sold at the moment are not able to be recycled in our general recycling bins as they are either made from a composite plastic which is not recyclable, or they are too small and will get missed in the recycling plant, ending up in general waste. Even those that can be recycled first need the aluminium lid removed from the plastic pod, and the leftover coffee grounds disposed of, which doesn’t exactly fit with the convenience message the pods are selling.

Some companies like Nespresso and instash run their own recycling programs which is good in theory, however as it requires the pods to be dropped off in store, or returned when you purchase more pods online it isn’t exactly the most user-friendly system. I’m not generally a cynical person, but the lack of statistics being given by Nespresso on the percentage of pods being returned through their recycling system tends to suggest to me that it’s not all that many, because if it was they certainly would be promoting that fact. That means that up to 28 million kilos of aluminium ended up in landfill from Nespresso pods in 2013, which is a huge amount of additional waste.

As the pods can take up to 500 years to break down in landfill, they’ll be hanging around for quite some time too, and with the rate we’re adding to the pile each year this has the potential to create a huge problem with regards to where all these pods are going to go. Given we have lots of alternative ways to get our coffee this just isn’t something I can get behind.

Thankfully even if you already own a coffee machine that requires pods there are now biodegradable alternatives out there which are far less harmful on the environment, although they often have a shorter shelf life, so keep an eye on that. Often it is only the pod itself that is biodegradable, the lid will still need to go in your general waste and the coffee grounds can go in your compost (or be used in a number of other ways), but it’s definitely better than it all ending up in landfill! Some of the brands are available in independent supermarkets, but most you will have to order from them online directly. Links to some brands worth trying are below:

So that’s it, the reasons why I don’t use pod coffee. I hope you found this helpful!

I Spy Plum Pie is Liz, an early 30s kiwi-born, Melbourne raised girl who is passionate about the environment and sustainability, food, exploring and learning new things. Join me on my journey to a happy, sustainable life!
March 11, 2015 by I Spy Plum Pie (admin) | 18 Comments

18 Comments on Why I Don’t Use Pod Coffee