My final Budapest Exploring post is all about the gorgeous thermal baths, amazing Market Hall and the impressive Heroes Square – seriously this city just ticks all the boxes! It really does have something for everyone, and I’m amazed at how much I managed to fit in to the 4.5 days I was there!

The Central (or Grand) Market Hall of Budapest was opened in 1897 and comprises three levels of stalls. I absolutely love visiting markets pretty much everywhere I go, and this was no exception – there’s always so much to see, smell and taste! 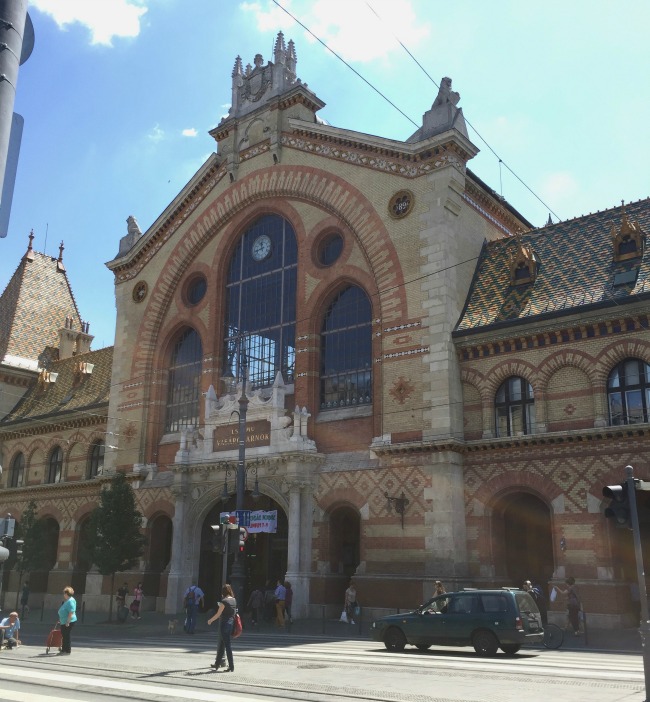 The ground floor is where most of the action takes place, with fresh fruit and vegetables, meats, dried fruits, honey and even an entire row dedicated to Hungarian foods – most notably paprika! I spent ages wandering around on this level, picking up some fruit to snack on later and marvelling over the huge range of paprika available. 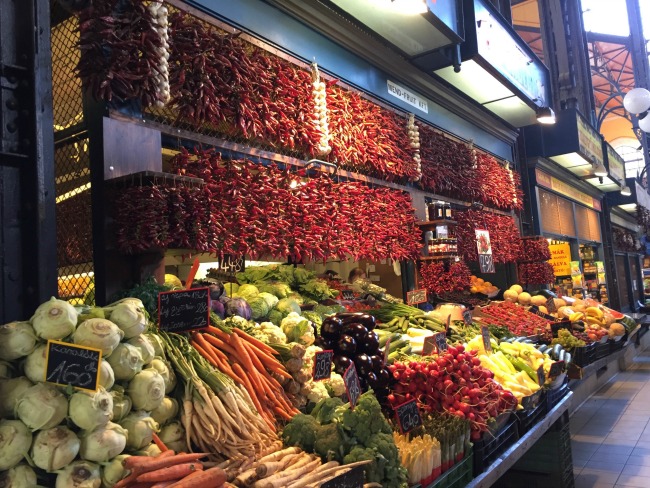 After lots of browsing I picked up three different kinds of paprika to bring home with me, and I have been happily cooking with them since I got back! Bringing home local ingredients is one of my favourite parts of travelling, you get to extend the holiday when you get home too! 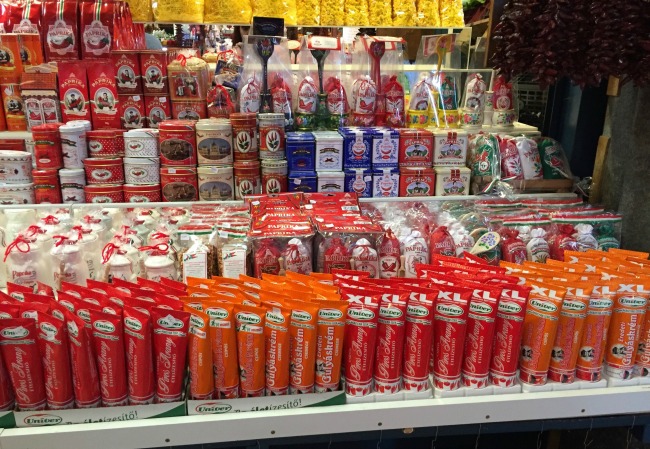 The basement of of the Market Hall is where you’ll find fish, pickles and even a supermarket, whilst the top level has Hungarian arts and craft products and street food. The crafts were particularly interesting to look at, there was a huge array of embroidery which was all very beautiful, but I resisted the urge to buy anything!

I did sit down and have a snack though – well, it was meant to be a snack but it ended up a little larger than anticipated! I decided to try a Hungarian speciality – langos – which is a fried flatbread with a huge array of toppings to choose from, both sweet and savoury. I decided to go with a staple version and topped it with sour cream, cheese and rocket. It was incredibly tasty but I was defeated well before I could finish it, and thankfully I went for a long walk after eating it! 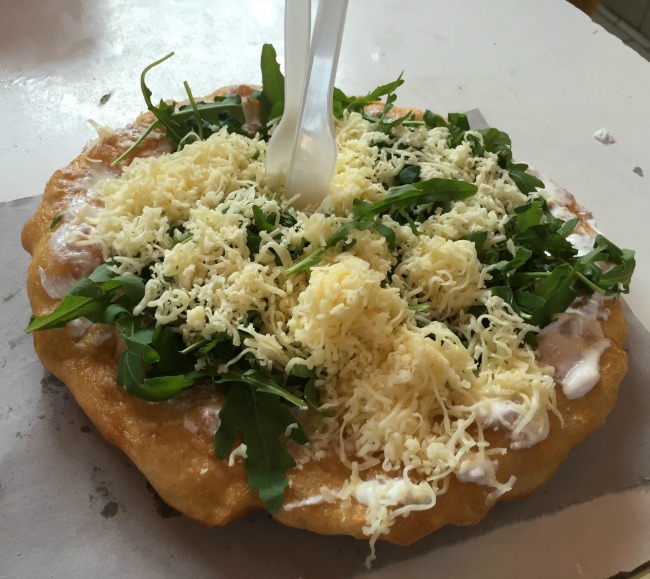 The Central Market Hall is not only full of delicious food but it’s also a very beautiful building both inside and out so it’s well worth a visit! It’s closed on Sunday and public holidays but is open from 6am every other day, so add it to your Budapest to-do list!

Hungary is home to amazing thermal springs and as a result Budapest has an incredible number of thermal baths, including traditional Turkish baths that have been in operation since the 16th Century! There are 118 thermal springs in Budapest with the water from these springs ranging from 21 to 78 degrees, and there are currently 15 public thermal baths in the city. The opening hours and cost varies from spa to spa, and some are male or female only on certain days of the week.

I opted to visit the largest of the baths – Szechenyi Bath – which is housed in a beautiful building and was the first thermal spa on the Pest side of the city. It has 3 outdoor pools, 15 indoor pools, steam rooms and steam baths. Cost of entry varies depending on day of the week and whether you want a locker or a cabin, but is around $22-25. 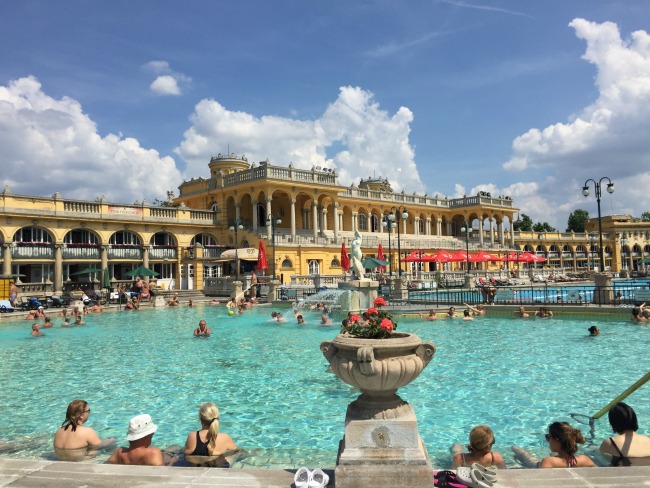 The middle of the outdoor pools is an actual swimming pool (as in, for doing laps!) and requires you to wear a swimming cap, but the rest of the baths are for lounging around in, and there are a large number of sun lounges scattered about. The pool in the photo above is 38 degrees and it is where you’ll find older Hungarian men playing chess pretty much at all times – a nice life if you ask me! 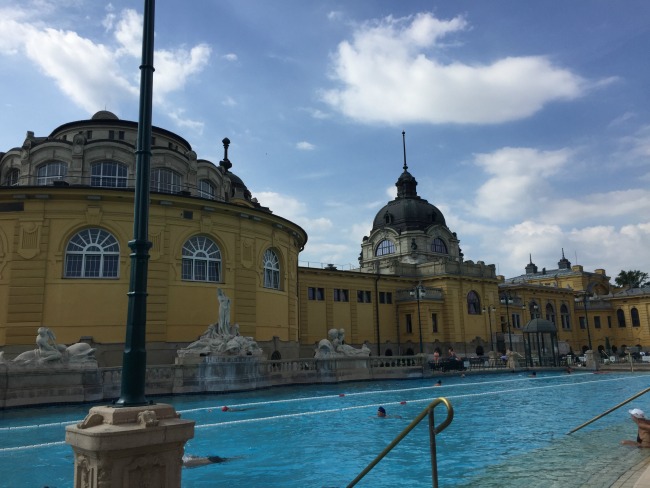 I don’t have any photos of the inside as I left my phone in my locker for safety sake, but trust me it is incredibly beautiful. I wandered from room to room, hopping in and out of thermal baths which were generally between 27 and 40 degrees (I didn’t last long in the hotter ones!), but there are also some freezing cold ones which I was brave enough to try just the once! As the water comes straight from thermal springs it is full of minerals including calcium, magnesium, hydro-carbonate, sodium and sulfate, so it is said to be great for your joints and skin.

I spent about 4.5 hours in the pools and lying in the sun, so it was an amazingly relaxing way to pass some time. I got there around 9am and it was nice and quiet then (it’s meant to be busy when it opens at 6am) and it was starting to fill up again by the time I headed out, so I think I timed things well. There is a cafe on site and I would recommend you take a bottle of water (which you can easily refill at lots of points inside) as you will need to keep your fluids up. 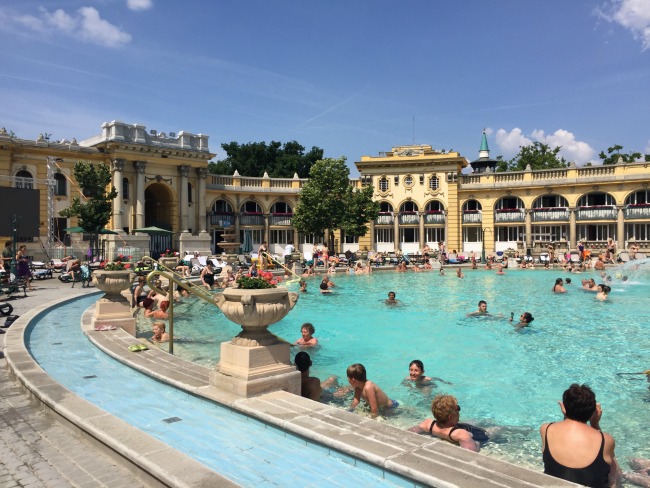 You also need to take your own towel and I would recommend taking two – one to carry around with you and one to dry off before heading out, as well as sunscreen. The entry can be a bit confusing as there are multiple ways to enter the building and you may find limited English is spoken, but it’s not hard to find your way around so don’t let that deter you!

The thermal baths are an absolute must do whilst in Budapest, and whilst I have nothing to compare it to I can definitely recommend Sczechenyi Baths as an excellent option!

One of the reasons I chose Sczechenyi Baths is because it is located within the beautiful City Park, which includes the Budapest Zoo, Heroes Square, Museum of Fine Art and even a castle! After my relaxing morning I spent a while wandering through the gardens to take in the sights. 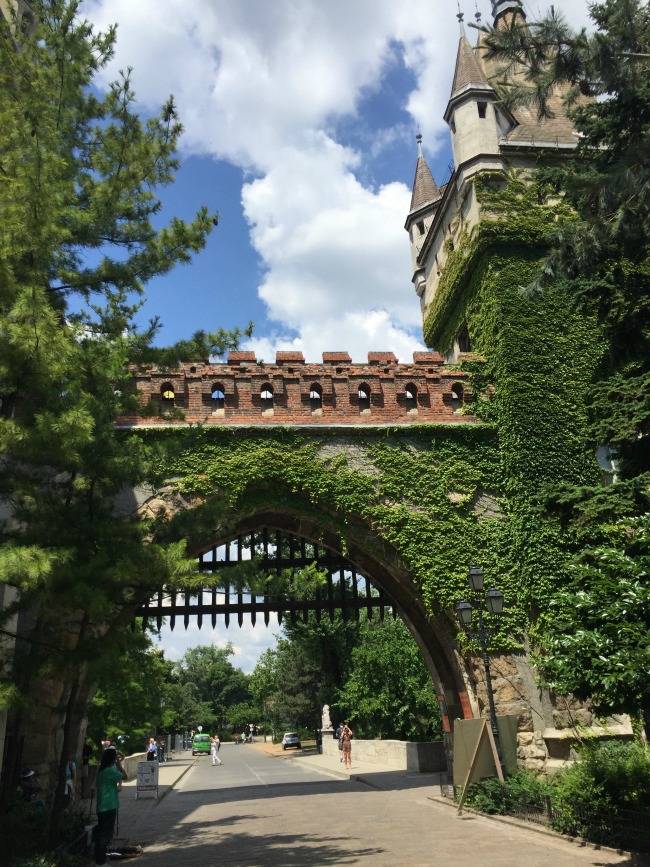 The castle in City Park is known as Vajdahunyad Castle and is a replica of a Transylvanian castle and is surrounded by a man-made lake which is used for boating in the summer and an ice-skating rink in winter. Whilst I’m not much of an ice-skater I have a feeling it would be pretty amazing! 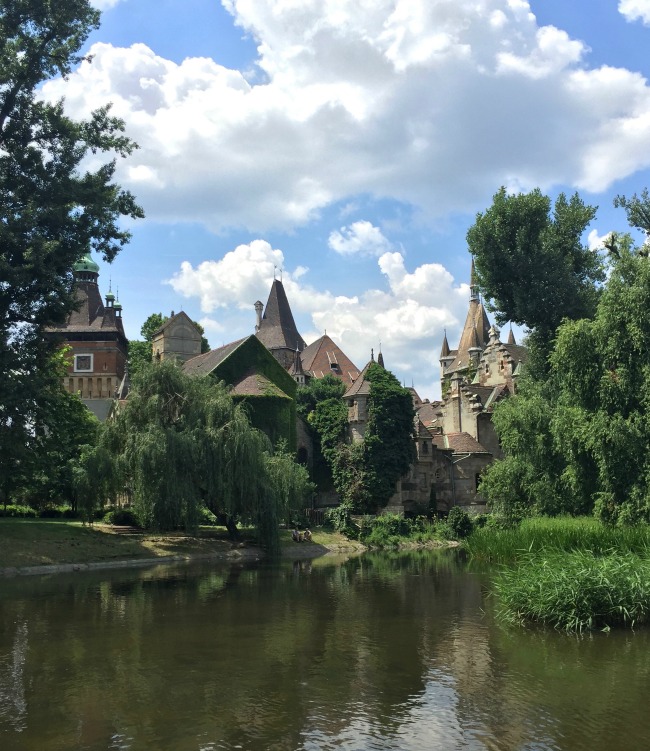 The buildings all through this part of the park were so beautiful, I was continually finding myself so impressed by the architecture of Budapest – as well as being reminded to look up all the time! 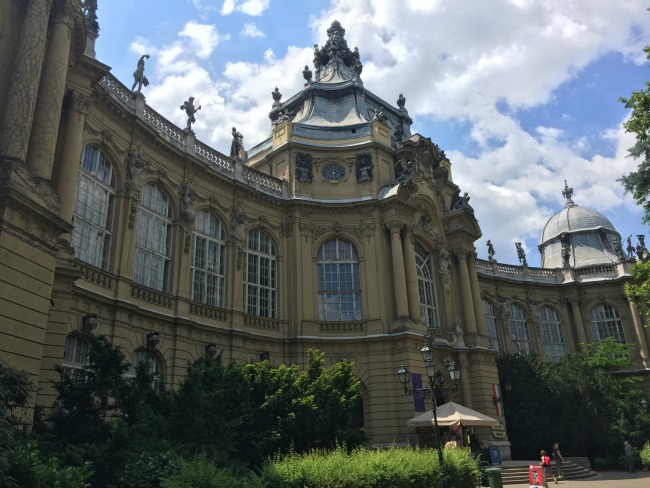 One of the most impressive sights in this part of Budapest is Heroes Square, which was laid out in 1896 to mark the thousandth anniversary of Hungary and includes the huge Millennium Monument which includes statues of Archangel Gabriel, the seven chieftains of the Magyar tribes, kings and other historical figures. The monument originally had statues of the Habsburg emperors but these were replaced by Hungarian freedom fighters when the monument had to be rebuilt after WWII.

The square has the Museum of Fine Art on one side and the Hall of Art on the other and the whole thing stands at the start of the Andrassy Avenue, the most impressive boulevard in Budapest – so impressive it’s even recognised as a World Heritage Site. 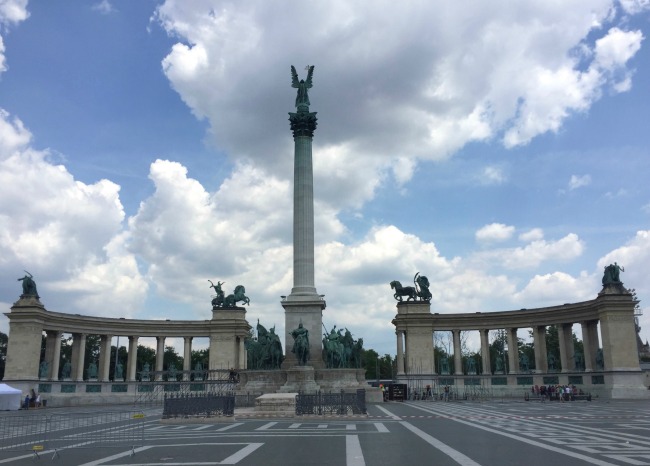 The whole site is definitely worth a visit, and from Heroes Square it’s a really lovely walk back into the centre of Budapest straight down Andrassy Avenue. Make sure to stop off and buy a Chimney Cake along the way, they’re a Hungarian delicacy as well! 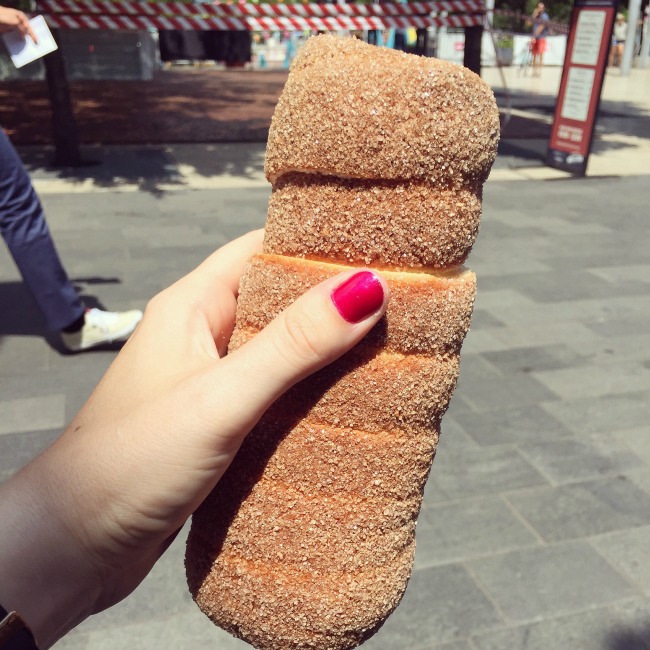 I thoroughly enjoyed my time exploring Budapest, it blew me away with its beautiful buildings, incredible sights and rich history. I learned a lot, walked a huge amount and loved every minute of it! If you’ve never thought about visiting Budapest I definitely recommend you add it to you wanderlust list!

Have you been to Budapest before? Did you visit one of the thermal baths?

I Spy Plum Pie is Liz, an early 30s kiwi-born, Melbourne raised girl who is passionate about the environment and sustainability, food, exploring and learning new things. Join me on my journey to a happy, sustainable life!
November 30, 2016 by I Spy Plum Pie (admin) | 0 comment