After a few days in London I hopped across the ditch to do some Dublin exploring next! I had never been to Ireland before but as the whole impetus for my trip was a wedding in the Irish countryside I thought it only made sense to fit in a few days in the capital as well.

My friend Kat & I managed to cram a whole lot of sightseeing in our few days of Dublin exploring and I left completely enamoured by this gorgeous city and it’s oh-so-friendly people. I’m going to share our adventures over the next couple of posts, starting with some of the more historical sites – Christ Church Cathedral, St Patrick’s Cathedral and Trinity College!

Christ Church Cathedral was founded in the medieval times – around 1028 –  although back then it was a wooden building and wasn’t rebuilt in stone until the 1180s, which is still a mind-blowingly long time ago in my books. Some significant works were done in the 1870s, particularly internally, meaning that whilst it is Gothic in style it also includes some Victorian elements. 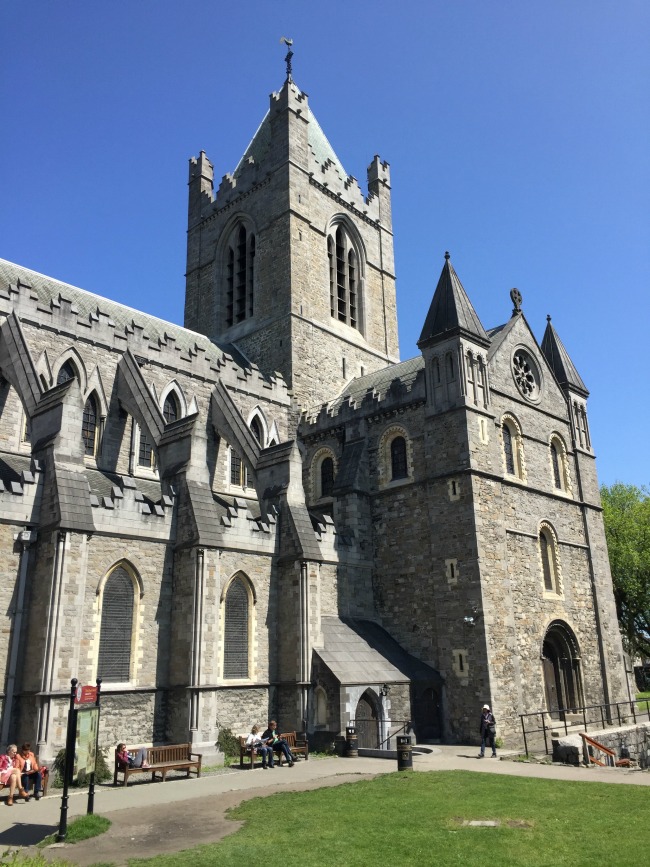 It costs €6.00 to enter, with the money going to the upkeep of the building, and it was breathtakingly beautiful inside. Over its life the Cathedral has hosted Kings, provided the choir for the world premiere of Handel’s Messiah and has the largest cathedral crypt anywhere in Ireland or Britain. The crypt was constructed in 1172, making it the oldest structure in Dublin. 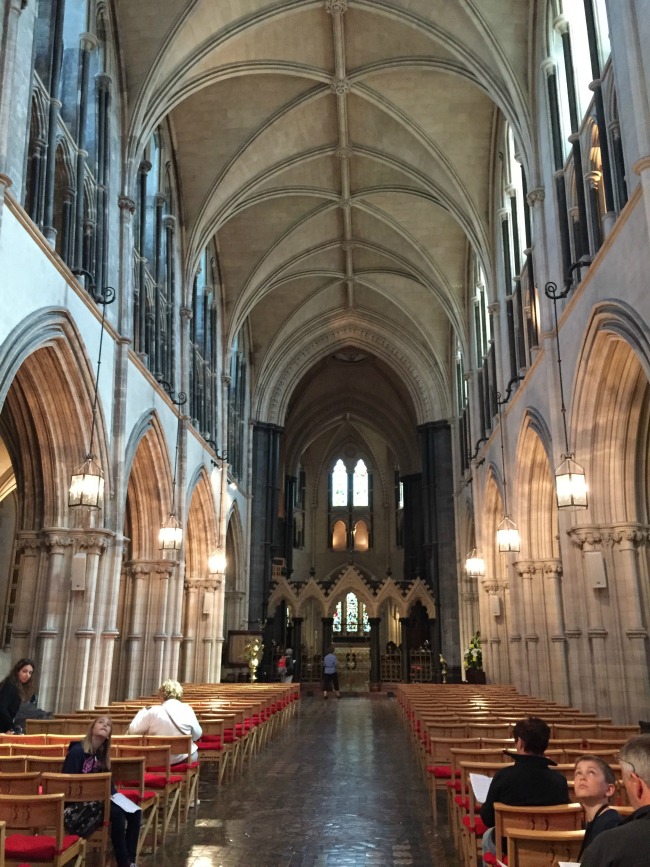 You could even go down into the crypt which was unsurprisingly rather dark, but incredibly interesting. It included historic diocesan artefacts including a tabernacle used by James II and statues of Charles I and II, with the royal arms between them (on the right below). 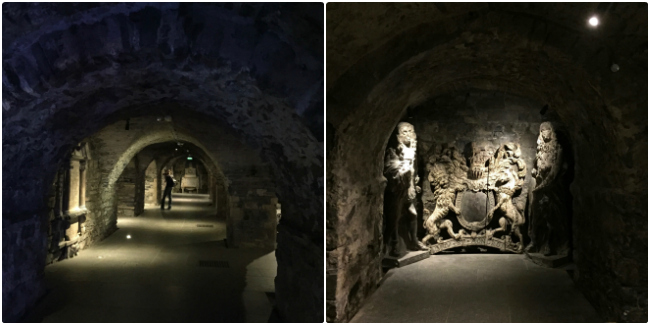 Whilst not being a religious person myself, I almost always visit Cathedrals when I’m travelling as the effort and detail that goes into their construction is truly magnificent. It’s even more incredible when you think they didn’t have access to any of the tools we do these days yet still managed to design and build something that immense – and it’s still standing nearly 1000 years later! Well worth a visit.

The second medieval cathedral in Dublin is St Patrick’s, which isn’t quite as old as Christ Church but pips it on size, with a 43m high spire. It was founded in 1191 with the current building dating from 1220. Since 1870 it has been the national cathedral for the people of Ireland, as Christ Church is the seat of the Archbishop of Dublin. 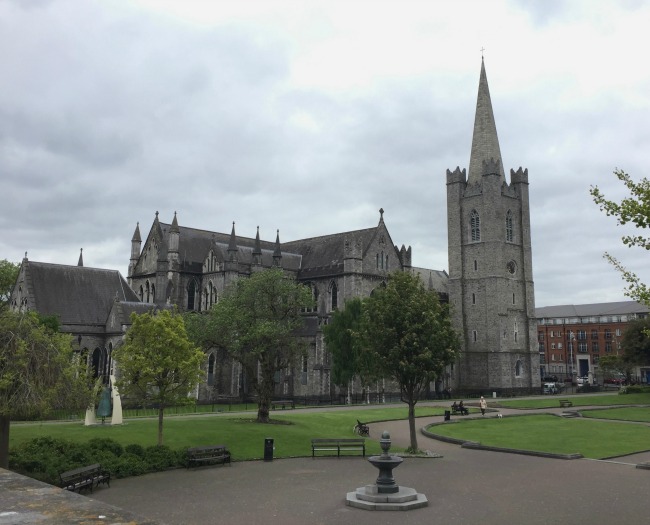 The most famous of St Patrick’s previous deans is Jonathan Swift, the author of Gulliver’s Travels, who was Dean of the Cathedral from 1713 to 1745. He is buried under the Cathedral floor and many items relating to him are on display including his pulpit, death mask and a cast of his skull. 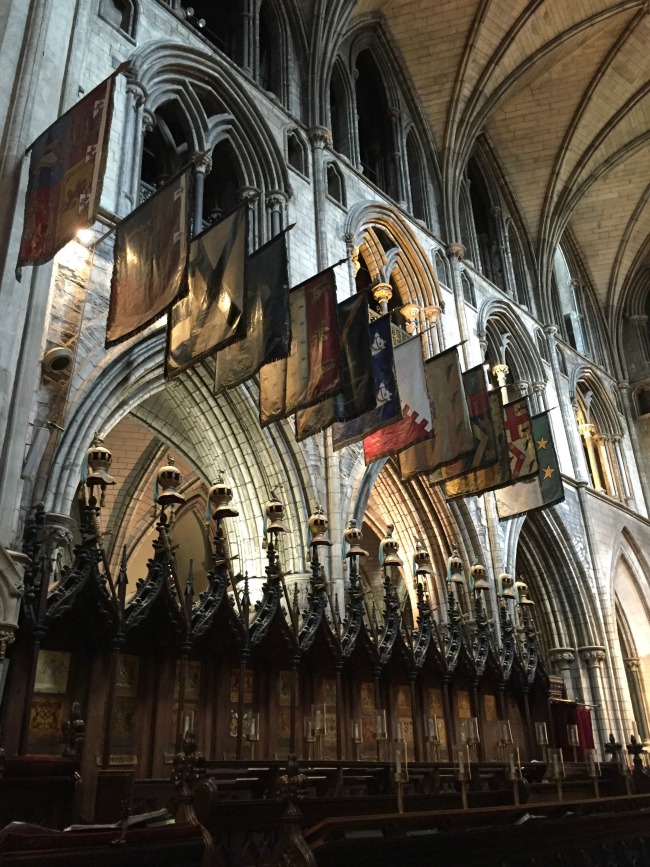 The choir stalls were particularly beautiful, decorated with banners and hatchments of the Knights of Saint Patrick, which was an order founded by King George III in 1783. Given the immense height of the Cathedral it’s not surprising that the vaulted ceiling was breathtakingly beautiful (not to mention a feat of architecture!) and Kat and I spent ages just staring up and taking in all the architectural details.

Thankfully we didn’t forget to look down as well, there were some amazing areas of tiling as well! 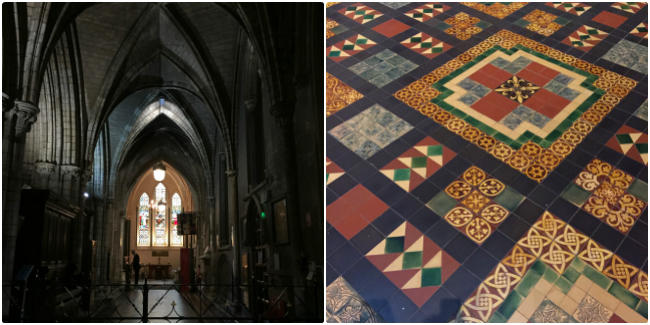 Entry is also €6.00 and the Cathedral even has free wifi throughout! It was an incredibly beautiful building and one I highly recommend you pop into if you have your own Dublin exploring adventures.

On a verrrry fresh Dublin day Kat and I headed down to Trinity College, which was founded in 1592(!), making it Ireland’s oldest university. Unfortunately it took a little while longer until women were allowed to attend as full members, that didn’t occur until 1904! 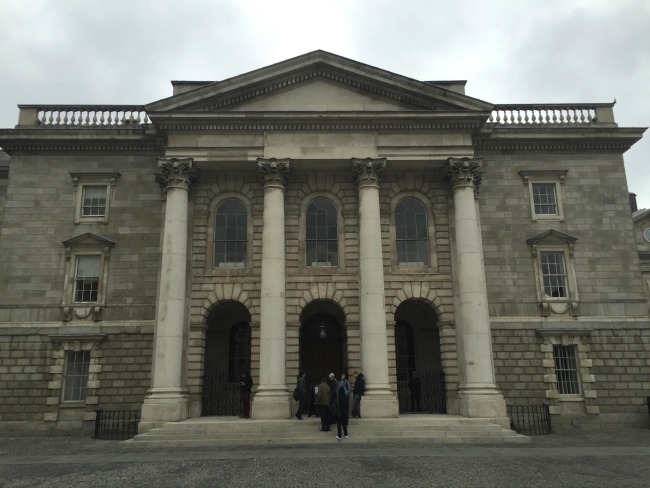 Trinity College has educated many notable people including the aforementioned Jonathan Swift, as well as Oscar Wilde, Samuel Beckett, Oliver Goldsmith and not one, but three, Presidents of Ireland. It was originally located on the outskirts of the city walls, but over time Dublin grew around it and it is now right in the middle of the city.

You can do guided tours of the old campus with current students for €13, which Kat and I chose to do, and this includes entry to the Book of Kells and Old Library (which cost €9 to visit otherwise). We had a hilarious tour guide who took us around the four major squares of the College and told us all kinds of stories about its 500 year history, architecture and previous students. 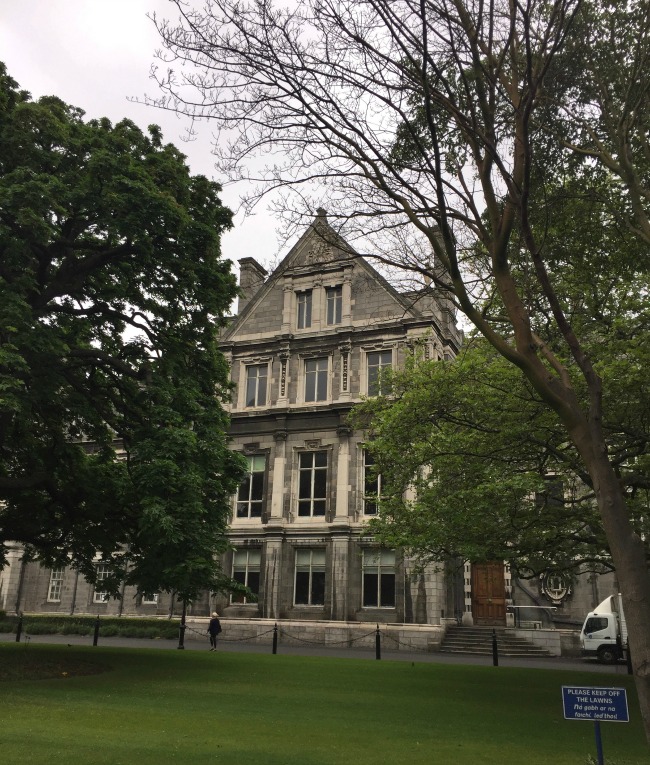 We then visited the Book of Kells, which is one of the real draw-cards of Trinity College, and was absolutely incredible to see in person. It is seen as Ireland’s greatest cultural treasure, dating back to the 9th century. The Book of Kells is a detailed, richly decorated copy of the four Gospels of the life of Jesus and they have two double pages on display at any one time – turning the pages every so often. Reading about all the lengths the monks went to first to create the book and then in order to protect it from the Vikings was eye-opening and I’m so glad I got to see it.

We then headed through to the Old Library which was probably one of the most beautiful rooms I have ever had the pleasure of walking through – Kat and I may have let out an audible gasp when we walked in! 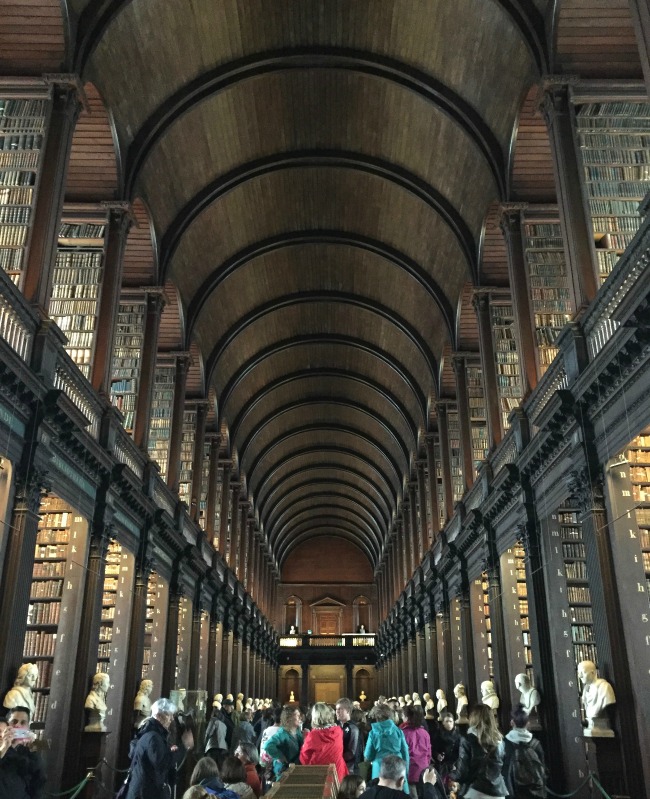 One of the most interesting quirks of the library is that the books aren’t displayed in strict alphabetical order, instead they are in size order with the smallest books on the highest shelf and the largest on the bottom! You can make that out in the below photo, and whilst it might make it harder to find the right book it does make it look more uniform! 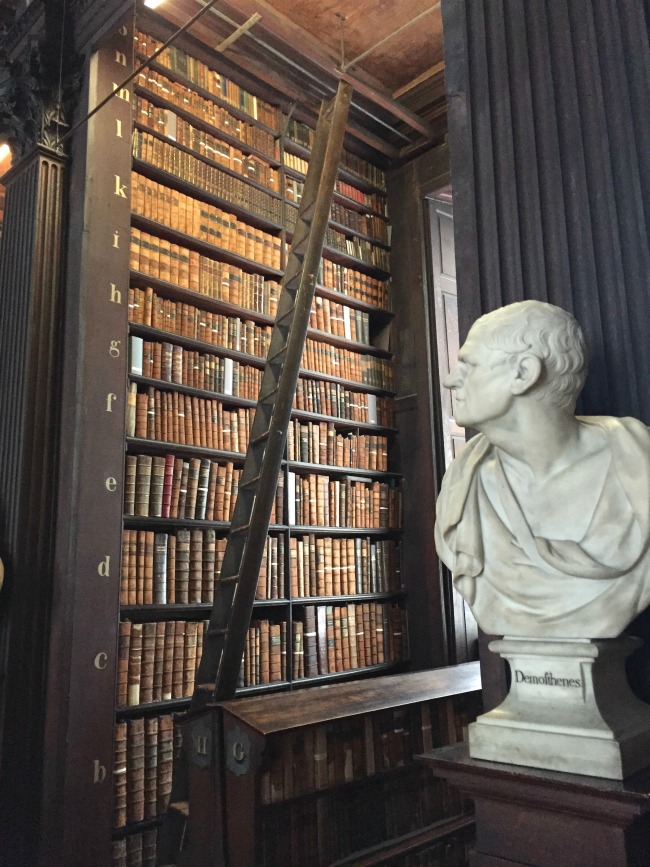 The walls are also lined with busts of famous authors and philosophers and it houses over 200,000 of the Library’s rare and very early volumes as well as one of the last remaining copies of the 1916 Proclamation of the Irish Republic. 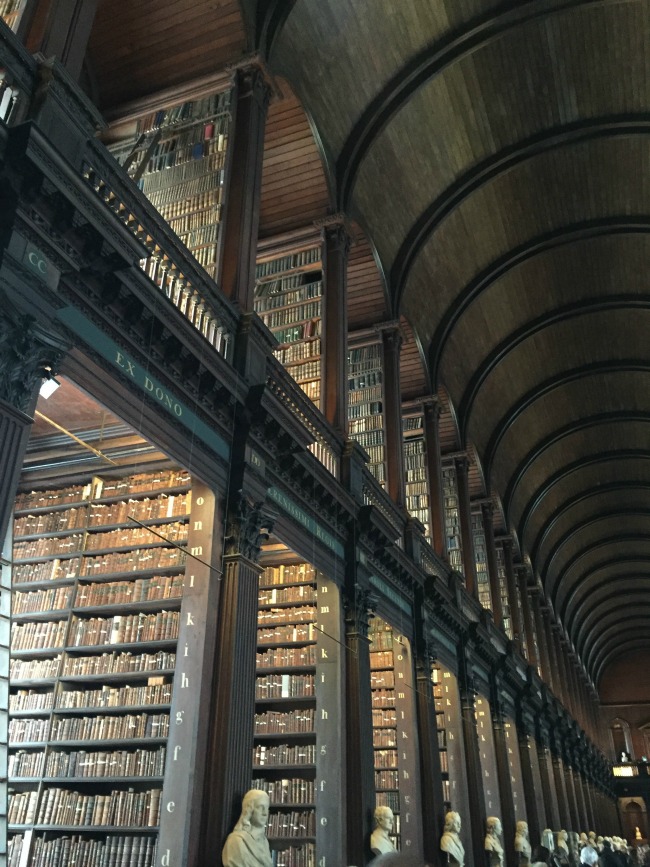 The whole of Trinity College was definitely worth a visit and I would recommend doing one of the guided tours as it doesn’t cost much extra than just seeing the Book of Kells and the Library (which you definitely won’t want to miss!) and you get to learn about the college history – and present – first hand from a student. Who knows, you might get a student as hilarious as the one we got!

And so concludes the first edition of my Dublin Exploring Adventures! Have you been to Dublin before?

I Spy Plum Pie is Liz, an early 30s kiwi-born, Melbourne raised girl who is passionate about the environment and sustainability, food, exploring and learning new things. Join me on my journey to a happy, sustainable life!
August 3, 2016 by I Spy Plum Pie (admin) | 0 comment