I did a review of the Carringbush Hotel when it first re-opened a few years ago, but I decided it was time for an update! I have visited the Carringbush many, many times over the years and even got takeaway from there whenever I could during Melbourne’s long lockdowns. So, it’s safe to say I’m a fan! Here are some of my favourite food options!

Actually, let’s start with the drinks. I love that the tap beer list is full of local options, and changes quite a bit as well. I always try and pick something I haven’t had before when I visit which is a nice way to expand my beer horizons. They have local wine on tap as well, plus a cocktail list that I never get round to trying! 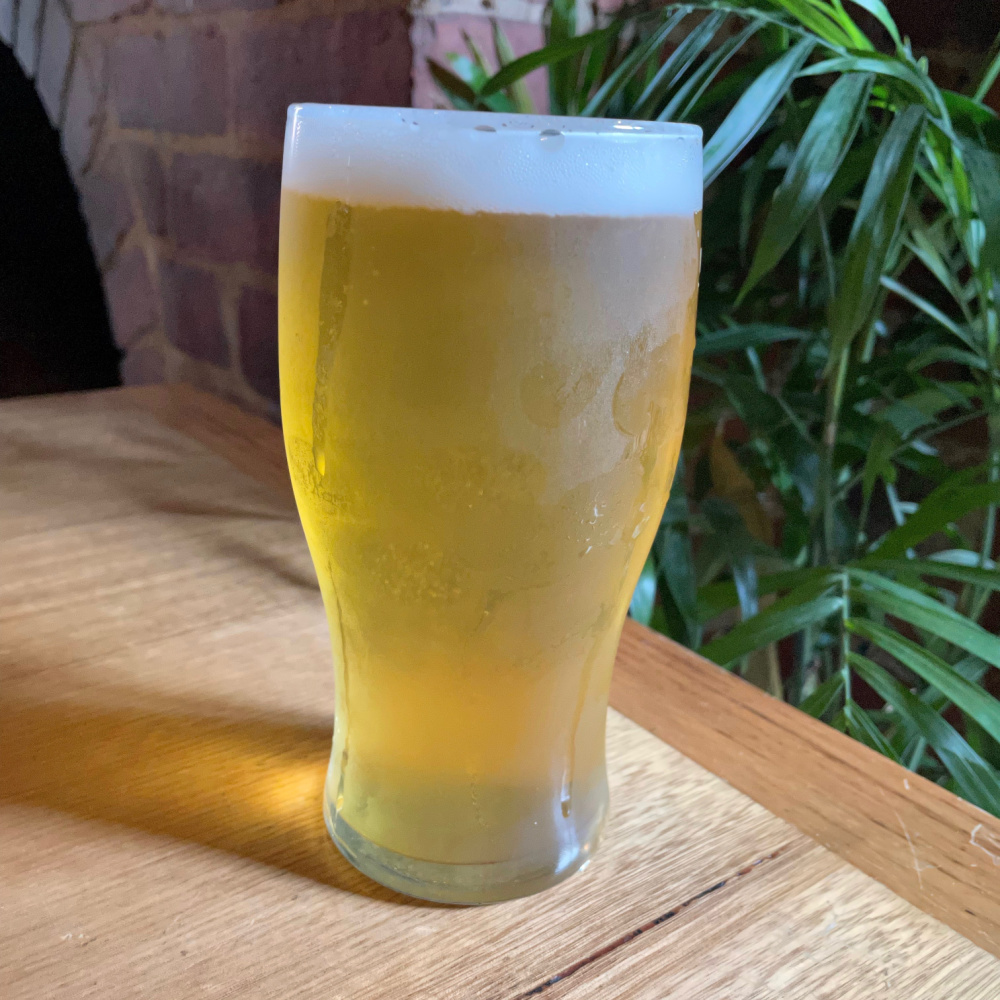 I often find myself going for the counter-meals section of the menu because if I’m at the pub I likely want chips. The Carringbush Hotel does good chips too! One of my go-to orders is the Fried Tofu Burger ($25) which comes with pickles, lettuce, tomato and burger sauce. It’s such a classic and delicious burger that never lets me down. 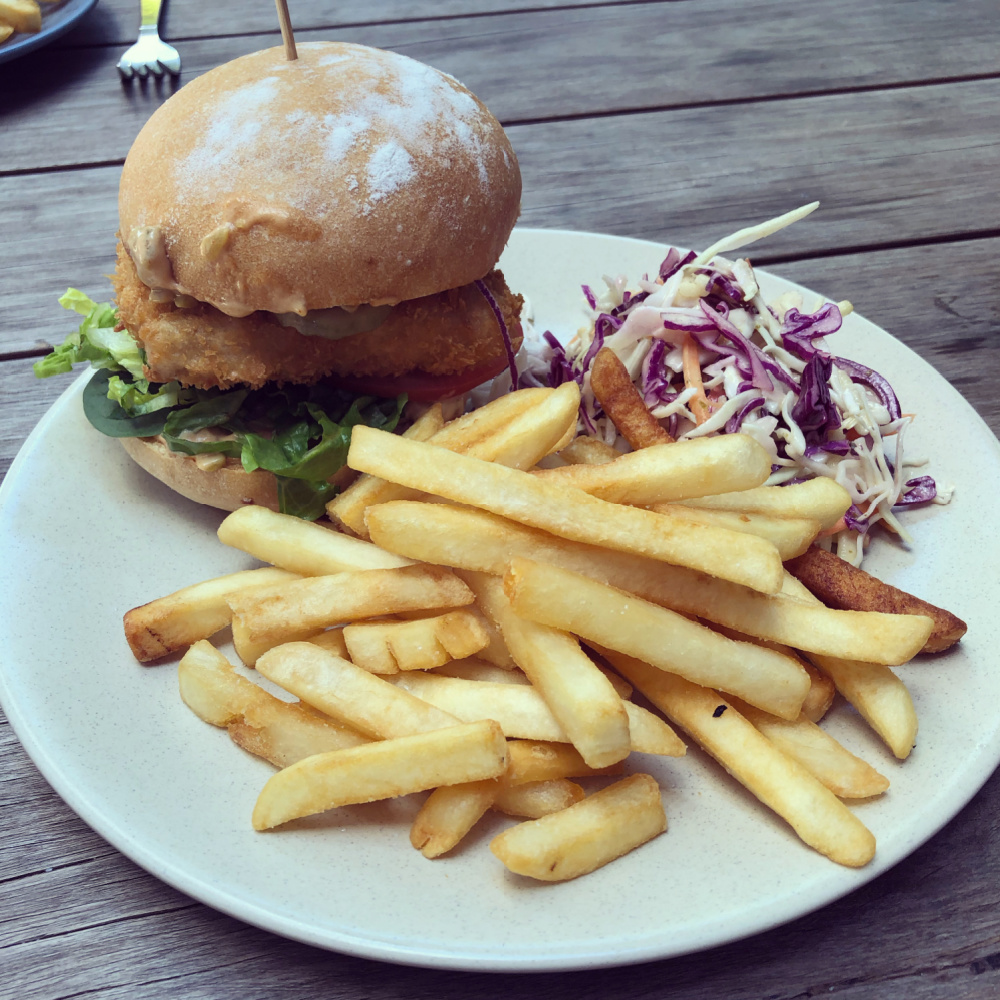 The Crispy Battered Cauliflower ($24) is also winner. It used to come with a buffalo sauce, but it’s now a Tikka Masala sauce, and both are delicious. It’s slightly less crispy in this version, but also feels a little less heavy so that probably balances out well! The mint yoghurt sauce is an excellent balance to the heat of the sauce. 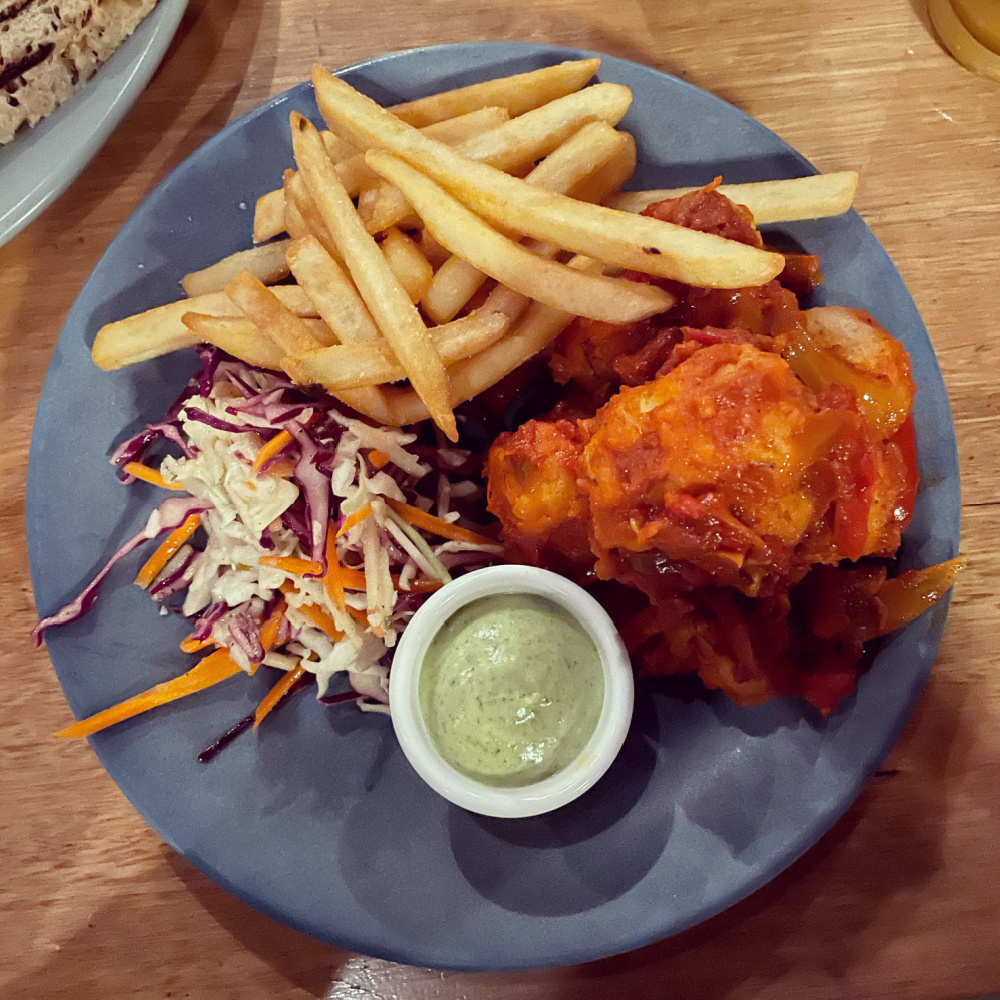 A more recent addition to the counter meals section is the Quesadilla ($23) which was filled with chipotle black beans, roasted capsicum and a mix of cheeses. The filling of these quesadillas was really tasty, although they maybe weren’t quite as crunchy on the outside as I like. It was a slightly lighter dish than the other counter meals (albeit still with plenty of chips!) which was lucky as we’d had some starters this visit as well! 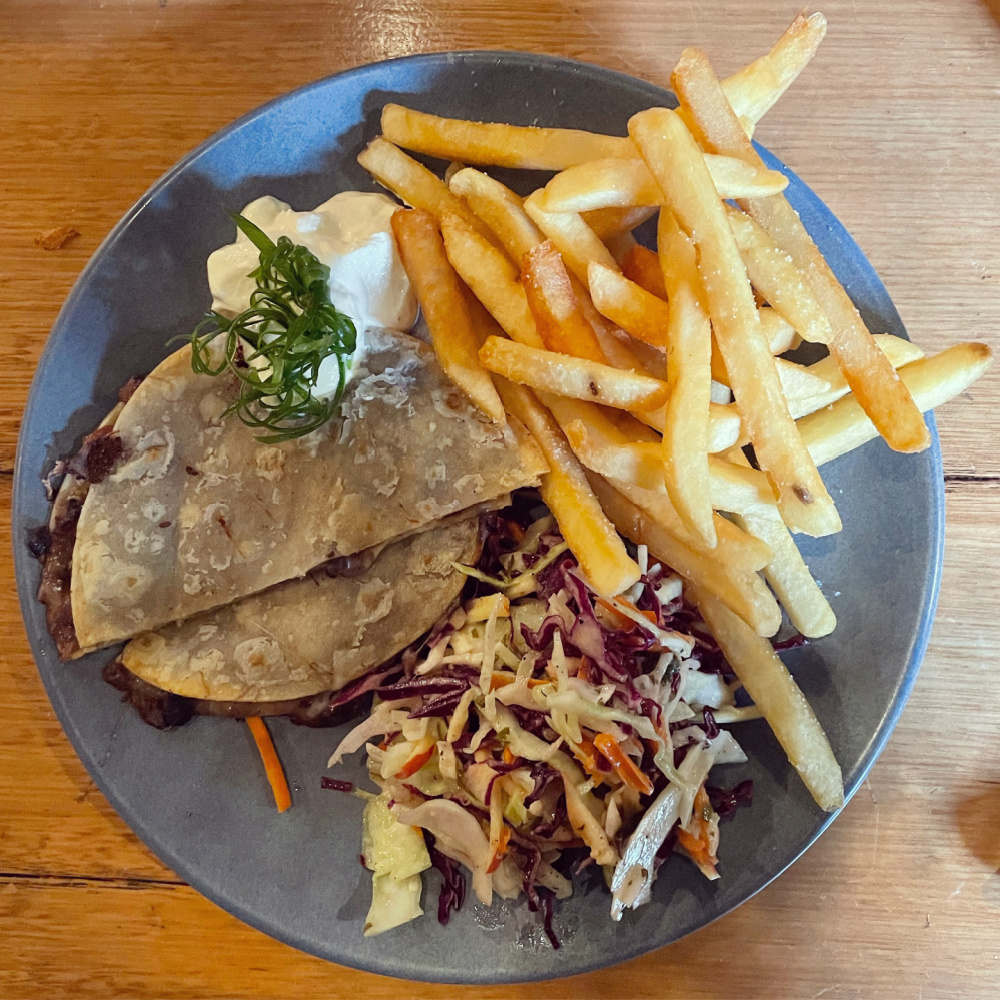 The dumplings ($14) are often my pick of the small plates and these ones are filled with char siu mock pork and mushrooms and served with a papaya salad and a mango, lime, coriander dipping sauce. These are always crispy and delicious, and I loved this new flavour combination. The papaya salad had an excellent kick thanks to the strips of chilli, but also resulted in a fresh addition to these fried dumplings. 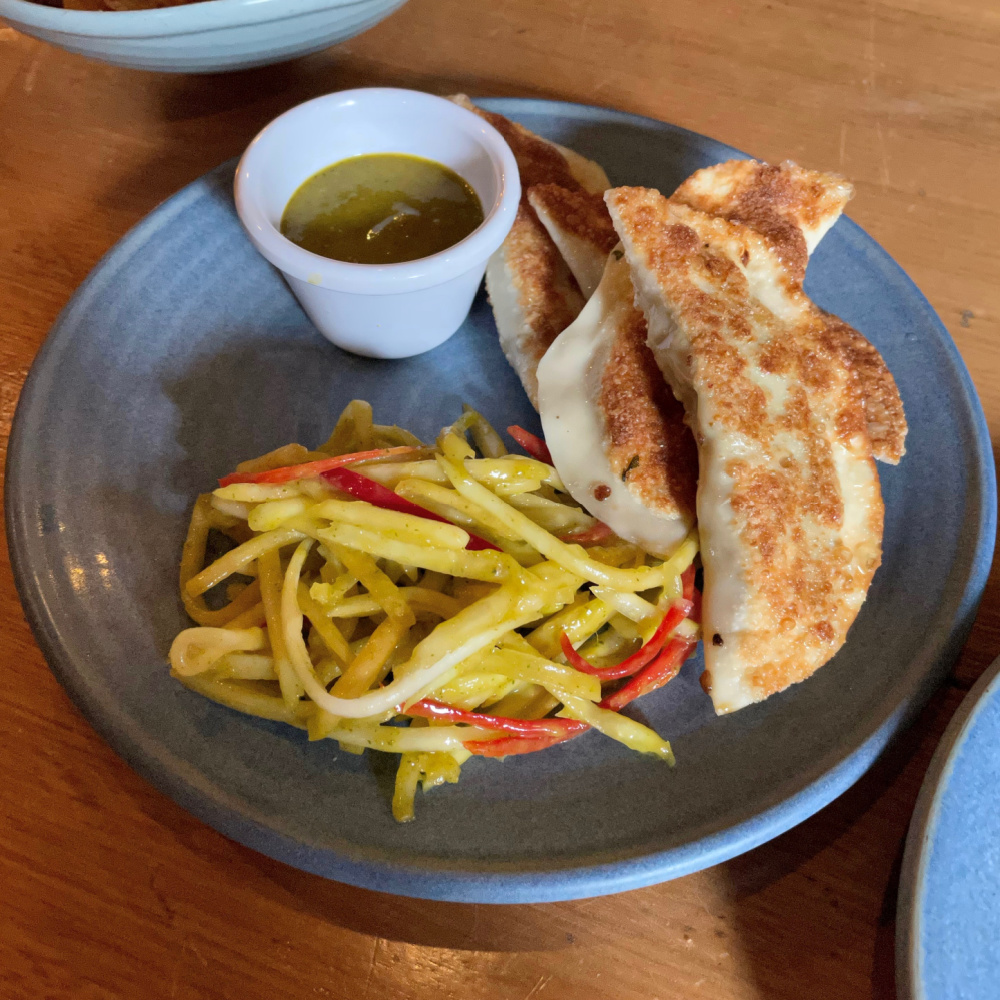 Last but not least, these root vegetable crisps ($7)! These salty, crunchy crips pare perfectly with a beer and are a great way to kick start an afternoon or evening at the Carringbush Hotel. Simple but delicious! 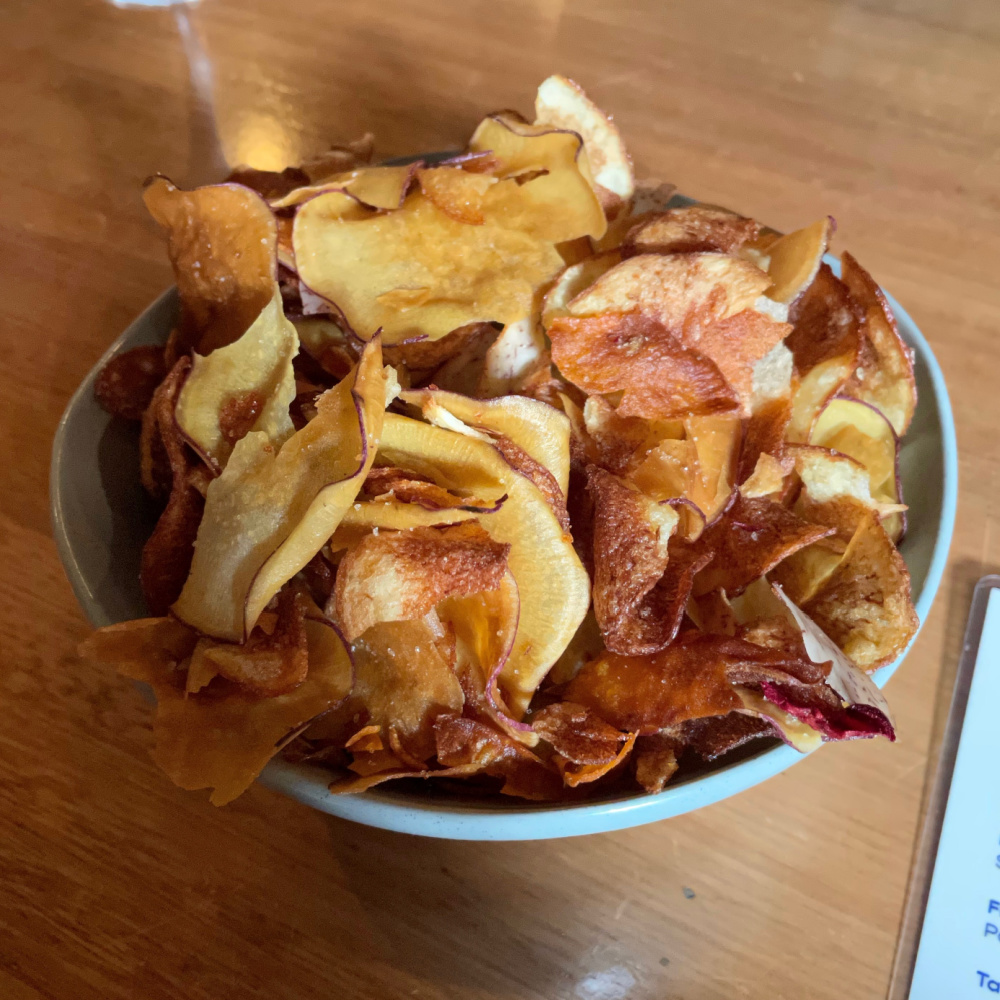 It’s pretty clear I’m a big fan of the Carringbush Hotel (and not just because it’s close to home!). The pub itself is light and welcoming, the staff are friendly and the food is top notch. They also play some sport on the tvs, but not in a way that makes it feel like a sports pub (which I do like as well!). They did happily switch from the men’s to the women’s cricket on my last visit when we asked though (it was a much better match!). It’s safe to say I’ll be visiting again soon!

Have you been to the Carringbush Hotel before?

I Spy Plum Pie is Liz, an early 30s kiwi-born, Melbourne raised girl who is passionate about the environment and sustainability, food, exploring and learning new things. Join me on my journey to a happy, sustainable life!
April 13, 2022 by I Spy Plum Pie (admin) | 0 comment