Major Major opened at the southern end of Smith Street late in 2014 and I visited not long after for lunch with my family and we were all mightily impressed with the food. B and I decided it was about time we returned to try their breakfast offerings and I actually remembered to take my camera this time!

It was an incredibly warm morning so I started with a Vietnamese Iced Coffee ($4) which was delicious, not too sweet and with a nice caffeine hit as well. B ordered his regular English Breakfast Tea ($4) which came in a gorgeous tea cup and a fancy tea pot, although he did say he would have hoped to get more than one cups worth out of it. 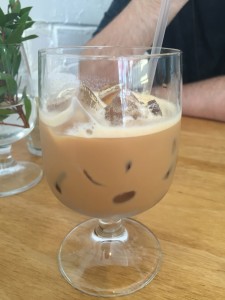 The food is Asian infused cafe food, with a range of eggs, pancakes, sandwiches and pastas on the menu. Some items are available all day with the pastas and other larger dishes available after 10.30am. They also have seasonal salads on display in the cabinet, as well as homemade baked treats like muffins and slices which change daily so there is always something new to try!

B ordered the smoked eggplant, sugo, scrambled egg, provola cheese and spiced greens flatbread wrap ($15) which he thoroughly enjoyed. The smokey eggplant made for an excellent alternative to a standard scrambled eggs breakfast and the flatbread was deliciously spongey. Despite being called a wrap there were far too many fillings to successfully wrap it up, but B happily chipped away at it with a knife and fork instead (which also made it easier for me to steal bits to try!). 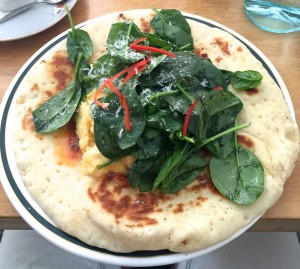 I ordered the baked beans ($16) which normally comes with Vietnamese sausage but they happily swapped it out for mushrooms for me to make it vegetarian friendly. It was also served with a 63 egg and toast soldiers and it’s safe to say I didn’t need to eat again for most of the day afterwards! The beans were full of flavour and whilst I was glad they weren’t cooked to a mush, some of them could have been cooked a little longer as they verged on the edge of undercooked. On the other hand the egg was perfectly cooked, and the toast soldiers were deliciously buttery and were ideal for mopping up the leftover sauce and the runny egg yolk. On the whole I was very happy with my breakfast! 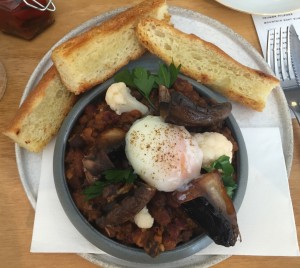 Major Major is definitely a welcome addition to the southern end of Smith Street and with friendly staff and fresh & flavourful food I will most definitely be back to eat there again. The menu might be on the short side but the ever changing salads and sandwiches should always mean there are vego friendly options for me to try!

I Spy Plum Pie is Liz, an early 30s kiwi-born, Melbourne raised girl who is passionate about the environment and sustainability, food, exploring and learning new things. Join me on my journey to a happy, sustainable life!
February 14, 2015 by I Spy Plum Pie (admin) | 2 Comments