It’s Spice Guide time again and this month is all about allspice! Where it comes from, what it tastes like and how to use it – we’ll cover it all! I’d love to hear how you use it in your kitchen as well. 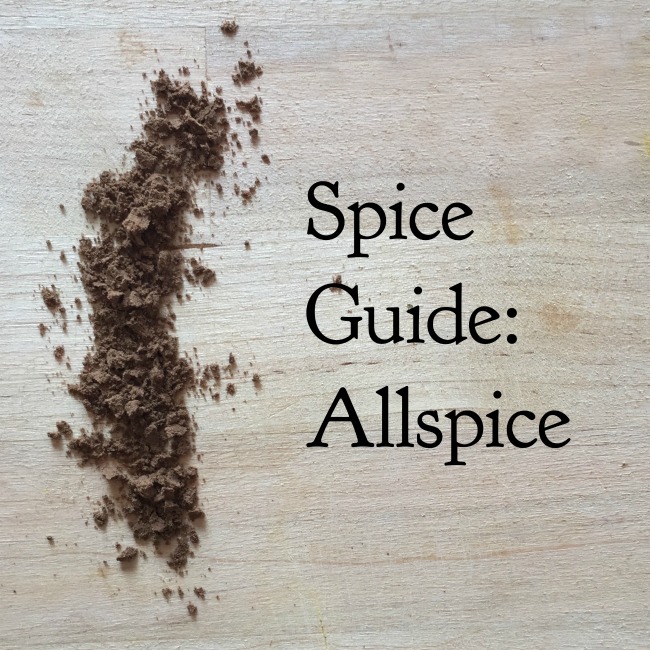 Allspice is native to Jamaica, and was brought to Europe in the 1500s. It is still predominantly grown in Jamaica, but is also grown in Bermuda, Honduras and Mexico. It goes by a few other names, including Jamaica pepper, pimenta and myrtle pepper.

The spice as we know it comes from the dried, reddish-brown berries of an evergreen tree. The berries resemble peppercorns and can be used whole or ground.

Allspice was given its name by the English due to the fact it smells like a combination of cinnamon, nutmeg and cloves. It has a strong flavour and scent, so should be used somewhat sparingly. Allspice has a warm, sweet flavour and it enhances the flavour of other herbs and spices, particularly cinnamon and nutmeg.

Allspice is used in both sweet and savoury dishes and unsurprisingly is a key ingredient in many Caribbean dishes. It is used in Jamaican jerk seasoning and moles, but also in many Middle Eastern, Arabic, Greek and German dishes. In British and American cooking it is used predominantly in sweet dishes including gingerbread, cakes, cookies and pies.

Given its heritage it only seemed appropriate that the recipe I share is for Jamaican Jerk Seasoning! It looks like a long list of ingredients, but they are likely all things you have at home already. Here’s what you need:

Combine them in a jar, shake them up and you’re good to go. The mix will last a few months in an air tight container.

I hope you found this Spice Guide for Allspice helpful! How do you use it in your kitchen?

I Spy Plum Pie is Liz, an early 30s kiwi-born, Melbourne raised girl who is passionate about the environment and sustainability, food, exploring and learning new things. Join me on my journey to a happy, sustainable life!
June 17, 2017 by I Spy Plum Pie (admin) | 0 comment