This month’s Spice Guide is all about black peppercorns – they’re a ubiquitous feature of all kitchens, but how much do you actually know about them?! Never fear, I’m here to help! 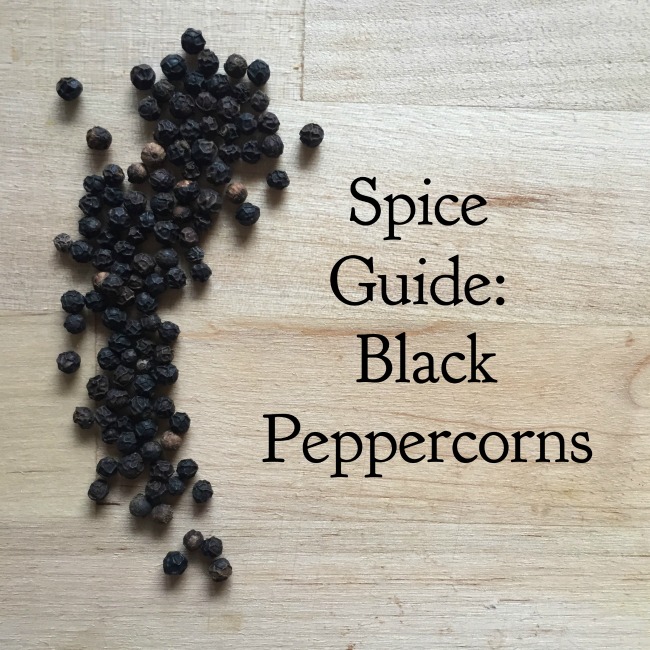 Peppercorns are native to South and Southeast Asia, and have been used in Indian cooking for thousands of years. They were a highly prized spice for trading, and were even referred to as ‘black gold’. By the time the 16th Century rolls around peppercorns are being grown throughout Southeast Asia, as well as Madagascar and China, and was being traded across Europe, the Middle East and North Africa. They were also used in traditional medicines, as well as Ancient Egyptian mummification processes.

Black peppercorns have a sharp, hot, zesty flavour and a pungent earthy, woody scent. It has the strongest flavour of all the peppercorn varieties. Peppercorn loses its flavour when pre-ground, so it’s best to grind it as required. Make use of that pepper grinder!

Given its history, black peppercorns are used widely in Indian and South Asian cuisines, although these days it is used in basically all cooking. It is often combined with other spices in blends, and is used to season pretty much anything savoury.

It complements all meats and vegetables, and can even be used to spice up fruits. Some of its most common uses are with eggs, cheese, soups, stocks, marinades, sauces, pastas stews and breads.

Black peppercorns pair well with most spices, but some of the best are:

As I mentioned, pepper is commonly used in spice blends – so I thought I’d share a recipe for Greek Seasoning!

Mix it all together then use to season salads, vegetables, meats, fish – you name it. Store in an airtight container for a couple of weeks.

I hope this spice guide for black peppercorns was useful!

I Spy Plum Pie is Liz, an early 30s kiwi-born, Melbourne raised girl who is passionate about the environment and sustainability, food, exploring and learning new things. Join me on my journey to a happy, sustainable life!
October 21, 2017 by I Spy Plum Pie (admin) | 1 Comment