Welcome to this month’s Spice Guide: Fennel Seeds! One of the most aromatic spices in my kitchen – let’s learn all about its flavours, how to use it and what to pair it with! I’d love to hear how you use fennel seeds in your kitchen too! 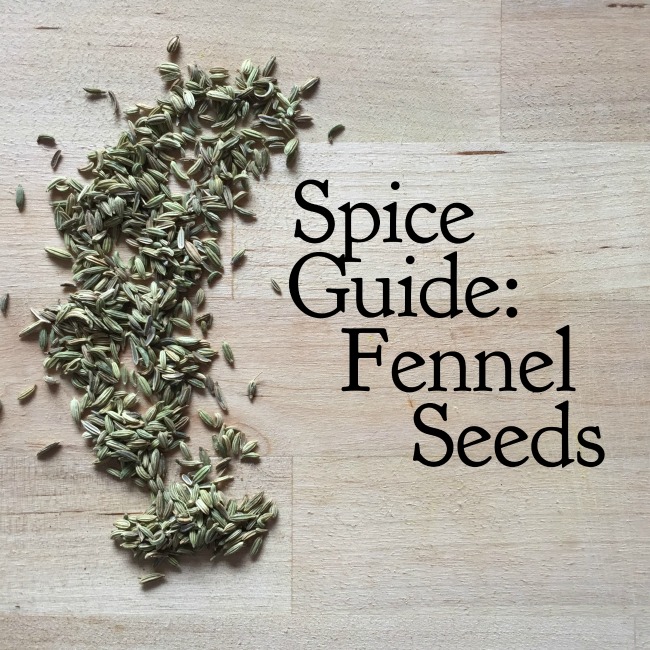 Fennel seeds are the fruit of the fennel plant, a flowering plant in the carrot family. It is native to the Mediterranean region but now grows in most parts of the world, particularly near coasts and riverbanks. It has historically been used as a digestive aid and in India and Pakistan the seeds are roasted then chewed on as a breath freshener.

Fennel seeds are oval in shape, and dry and harden on the plant before being harvested. They’re greenish-brown in colour and have little grooves in the seeds, and are often confused with anise which is similar in flavour and appearance albeit a little smaller.

Fennel seeds have a warm, predominantly sweet flavour with a subtle liquorice like flavour. The seeds can be used whole or freshly ground, and toasting the seeds brings out even more of the flavour. It can be used in both sweet and savoury dishes making it a very versatile spice!

Store it in an airtight, dark container for up to 6 months, grinding it fresh for use.

Fennel seeds are used in pretty much all cuisines but features heavily in Middle Eastern and Sub-Continental cuisines, as well as German, Spanish and Italian cooking.

It is often paired with chicken and fish, as well as in Italian sausages and meatballs and used in dry-rubs for meat. Fennel seeds are also an excellent addition to pasta sauces, breads and cookies. You’ll find fennel seeds in lots of recipes for curries, stews, marinades, chutneys and soups and it also goes excellently with lentils, tomatoes, onion, artichokes, cabbage, eggplant, olives, potatoes, rice, cheese, mushrooms nuts and figs.

Fennel seeds are a key ingredient in Chinese five-spice, as well as chai tea blends and garam masala.

If you want to make your own garam masala blend it’s as simple as toasting some whole spices, grinding them up and then storing the blend in a container to use as required. It’s well worth giving a try!

I hope you found this Spice Guide: Fennel Seeds useful!

I Spy Plum Pie is Liz, an early 30s kiwi-born, Melbourne raised girl who is passionate about the environment and sustainability, food, exploring and learning new things. Join me on my journey to a happy, sustainable life!
December 17, 2016 by I Spy Plum Pie (admin) | 2 Comments