As I’ve mentioned here a few times lately, my little apartment just underwent a bit of a renovation. Ok, more than a little bit – everything except the two bedrooms were pulled apart and put back together again! Given I didn’t do the work myself a blow-by-blow description is probably uncalled for, instead I thought I would share some of my favourite features! The big, the small and everything in between!

After looking into the article on ‘how to get more commercial roofing leads,’ it became a key driver for the whole renovation was to open out the layout of the kitchen and living room. The apartment is about 18 years old (I’ve been in it for 5) and whilst the kitchen was a decent size for an apartment, it was closed off, dark and disconnected from the dining and living areas. It didn’t help that half the room was floorboards and half was carpet either!

So! The whole lot was pulled out, and I couldn’t be happier with the end result. I can now stand in the kitchen and chat to friends who are at the table or on the couch. I can also see the TV which is excellent for my Sunday afternoon meal-prep/footy watching sessions! 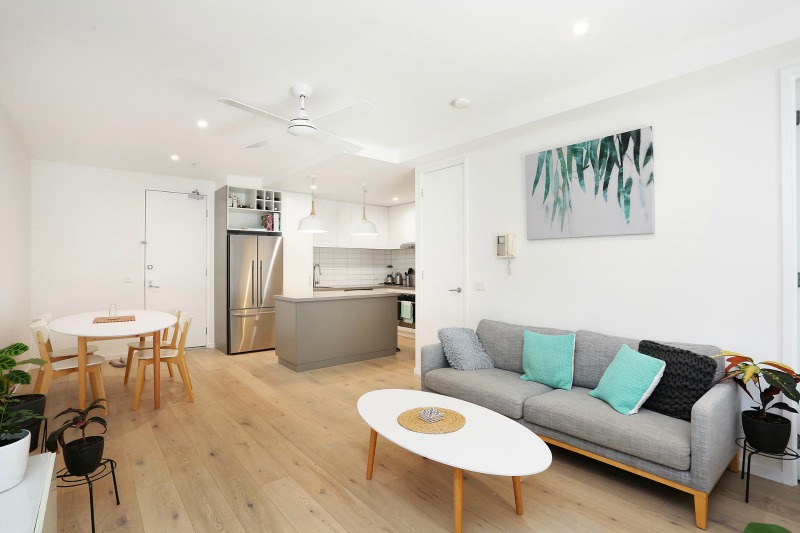 The layout of the kitchen is miles better as well. I couldn’t move things around too much given the location of pipes and vents, but we were still able to create a much more functional layout, in particular thanks to that island bench. Having all that extra space to do my cooking has been pretty much a game changer for me. I’m so excited by all the space-requiring dishes I can now start cooking (homemade pasta, I’m looking at you!).

I now have SO much more storage too. Extra height was added to the top cupboards which has seriously increased their capacity (although I’m not quite tall enough to reach the very top!). The pantry now has high-sided drawers that have allowed me to make proper use of the depth, and I even have a dedicated drawer for my reusable containers! Having all new appliances is pretty amazing too – I hadn’t quite realised just how noisy my old dishwasher was! 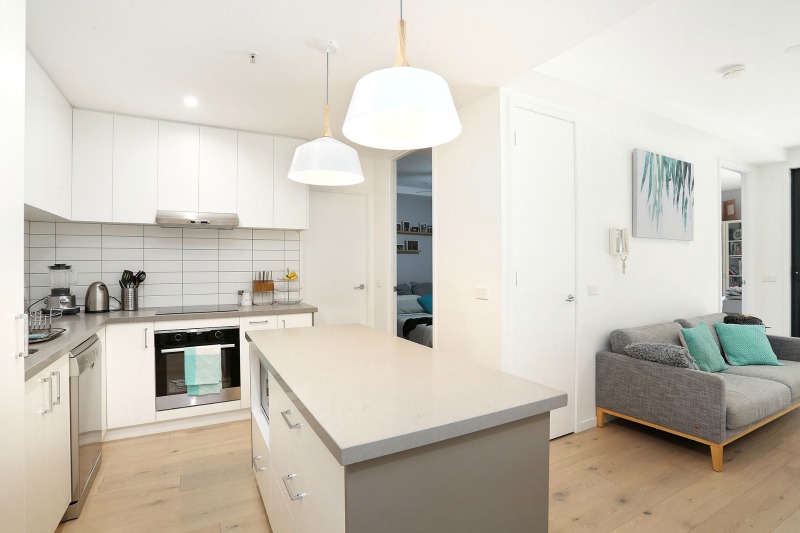 In my old bathroom the laundry was just part of the room and included basically zero storage. Now, it’s hidden away behind those doors on the righthand side and other than the washing machine it’s basically floor to ceiling storage. For someone who loves organisation it’s been a hugely positive change (and one worth doing the whole renovation for!).

As you can probably see from the photos above, I went with just two tiles for both the bathroom and the kitchen. I’m so glad I did because I love them both! I knew I wanted a subway style tile for the kitchen, but using them turned vertically for the bathroom walls was something I never would have thought of. I think they have turned out great, and I love the darker grout I was suggested too. The floor tiles might be my absolute favourite, it’s hard to see from that photo but they are a mid-grey colour and slate-like in texture and I just adore them.

The kitchen/lounge floor is an engineered hardwood and it has seriously lifted the space in a way I didn’t think it would. It’s lighter, brighter and having just one flooring has made the whole place feel bigger too. I just need to get myself a rug before winter hits!

Whilst I didn’t go all out on the lighting front, I did move around a few of the existing lights and added in these pendants, which I love. I also switched out every single existing light for LED alternatives (including the globes in the pendants!) which is a much more eco-friendly option.

Speaking of eco-friendly choices, I took advantage of the fact there was an electrician on site and got two ceiling fans installed as well. One has gone in the living room and the other in the master bedroom. I’m SO glad I did. I hate using the air-con unless I really have to, so ceiling fans are a much better option. The ones I chose have timers as well, so that’s excellent for hot evenings where I just need it on for a little while to help me sleep. Seriously one of my favourite features of the renovation! 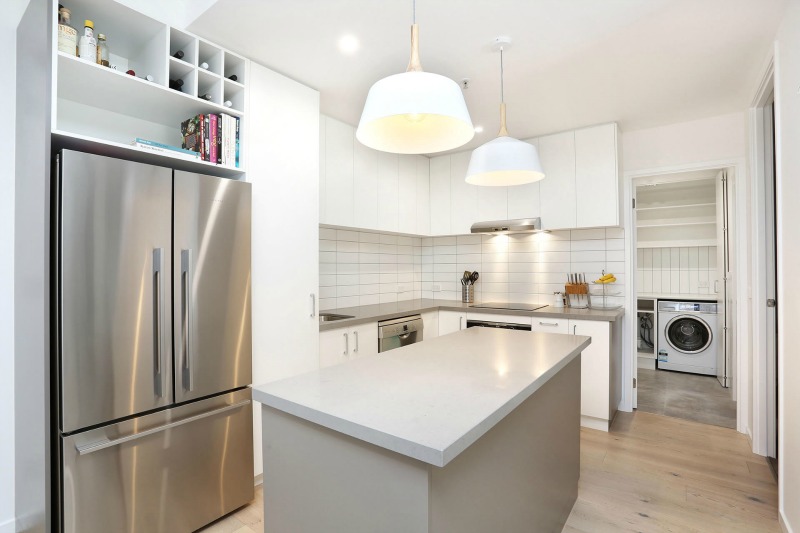 I’m not one of those people who thought they had a firm view on taps, but I’m pretty happy with the taps I ended up with so maybe I am! It’s hard to get a good photo of the kitchen tap, but it’s possibly my favourite of them all. Not only does it swivel around, but it has a fun pull-out spout that adds some excellent functionality. 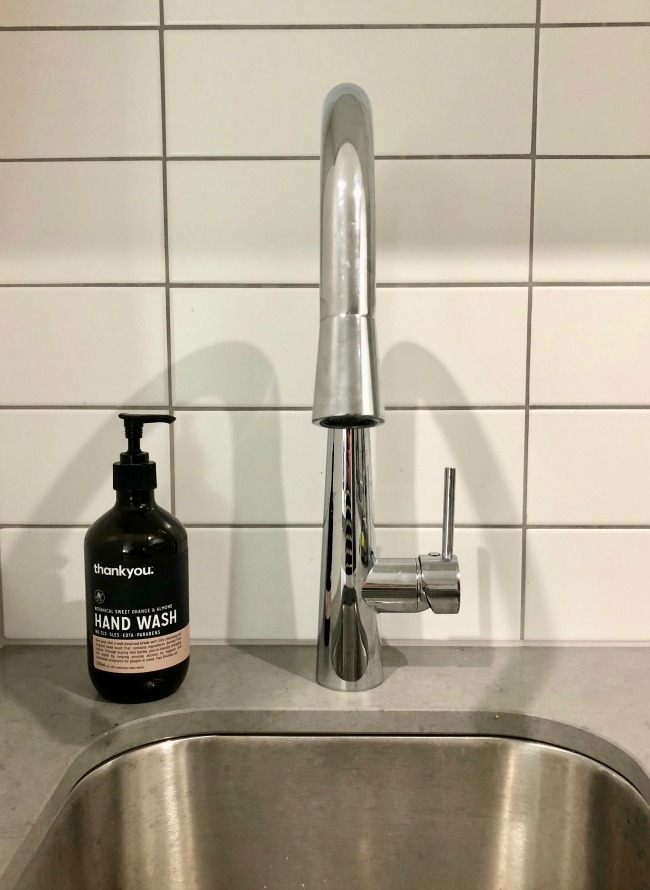 The bathroom tapware (which is all the Pegasi range) I am also super happy with – it’s a small thing but it turns out to be more important than I ever could have guessed. I also added a heated towel rail which I’m already super glad I did despite it not even being winter yet! 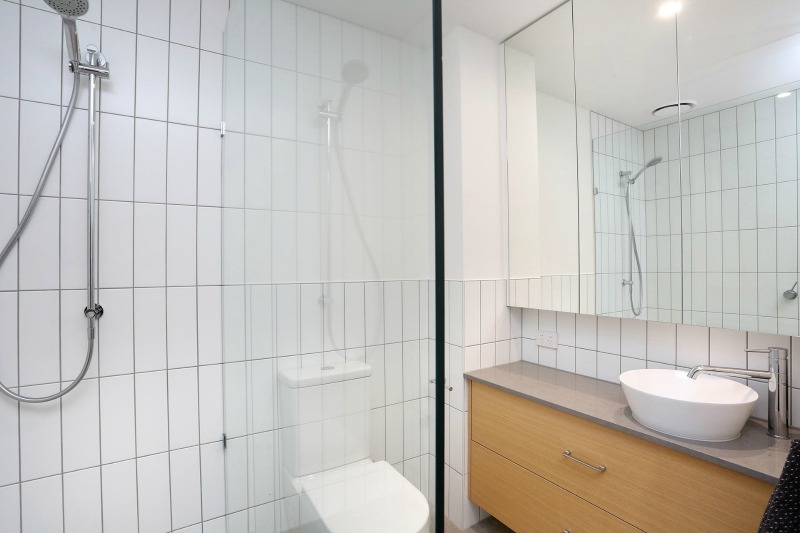 Melbourne people, if you’re looking for some excellent folk to help with a renovation at your place, here are some of the folk I used. (None of this is sponsored of course, I just know how hard it can be to find good people for a renovation!)

All the building and on-site project management (including subcontracting to the cabinet maker, tiler, electrician and plumber) was done by Chris from Harrods Building Solutions. All the people Chris used were excellent, the work is high quality and everything was finished pretty much bang on time which is pretty amazing. He even came back once I was in and changed over all the handles from the ones you see in the photos because they turned out to not quite be what I was after. Service!

The flooring was supplied and the installation organised through Slocum Floorcoverings in Eltham. Even though my place wasn’t exactly local to them they were more than happy to do the work for me. Nick was fantastic to deal with the whole way through as well.

Whilst I knew vaguely what it was I wanted from a colour/style perspective, I also knew that I was a little out of my depth. So, I used the design skills of Andrea from Jemden Interiors instead! I showed Andrea around and then met her in a tile shop where she helped me pick out everything from the tiles to the tapware, sinks, paint, cabinetry, lights, you name it. Being able to hand Chris a list of exactly what I wanted made the whole process so much smoother. Andrea even happily stepped in when some of the original ideas didn’t pan out as planned to help me find a solution.

Have you undertaken a renovation recently? If you’ve got any questions I’m more than happy to answer them!

I Spy Plum Pie is Liz, an early 30s kiwi-born, Melbourne raised girl who is passionate about the environment and sustainability, food, exploring and learning new things. Join me on my journey to a happy, sustainable life!
April 17, 2019 by I Spy Plum Pie (admin) | 6 Comments

6 Comments on My Favourite Features of My Renovation