The first Spice Guide of 2017 is all about sumac! This pretty spice doesn’t get anywhere near enough love in my opinion so I’m here to change that today! Join me to learn more about how to use sumac, what to pair it with and where it comes from! 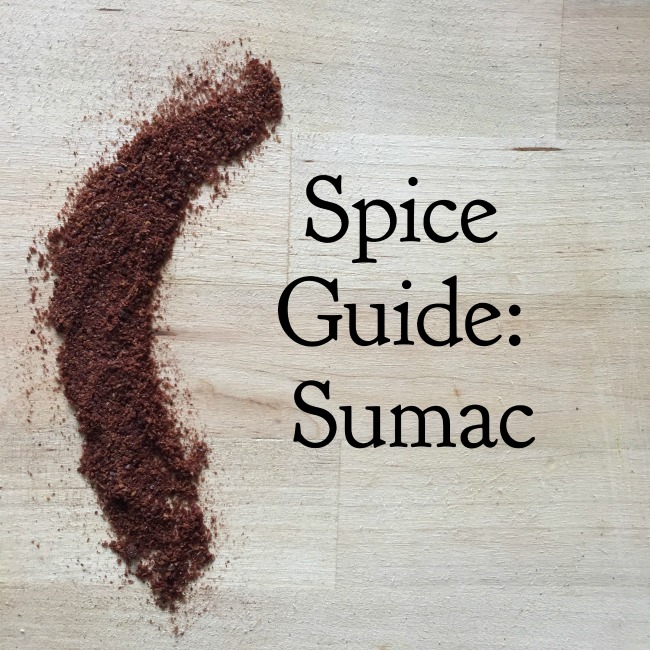 Sumac is the dried, ground powder form of berries that grow on a bush that is native to the Middle East. It has a deep red colour and has been used in Middle Eastern and European cooking since before medieval times.

It was used not only as a spice but for medicinal uses and as a dye as well.

Sumac has a tart, lemony flavour with a slight bitterness and even a touch of sweetness. It’s incredibly versatile due to its complex flavour and is often used in a similar way to a squeeze of lemon juice before serving a dish. Adding it to a dish makes everything look prettier as well!

It is also one of the key ingredients in the spice blend za’atar.

Unsurprisingly sumac shows up in all kinds of Middle Eastern cuisines, as well as Mediterranean foods. It is used as a dry-rub over meats, in sauces and marinades and sprinkled on top of dishes like dips (especially hummus) and salads. It goes excellently with grilled meats, roasted vegetables and grain dishes. It shows up in many kebab dishes across the Middle East as well.

In particular use it with vegetables like brussel sprouts, asparagus, cauliflower, tomatoes, onions and cucumber. It also shines with dairy products including feta and haloumi, yoghurts and labne.

it can also be used to make a sweet syrup to be used in things like drinks and desserts.

The best spices to pair with sumac include:

To kickstart your use of sumac in the kitchen start by sprinkling it on any of the foods I listed above – maybe try it on some grilled veggies or the next time you make some hummus. Another excellent way to use it is in this sumac-pomegranate salad dressing:

Whisk the ingredients together then drizzle over your salads and enjoy!

I hope this Spice Guide: Sumac was helpful, I’d love to hear how you use it in the kitchen!

I Spy Plum Pie is Liz, an early 30s kiwi-born, Melbourne raised girl who is passionate about the environment and sustainability, food, exploring and learning new things. Join me on my journey to a happy, sustainable life!
January 21, 2017 by I Spy Plum Pie (admin) | 2 Comments