One of the most fun things I did while in London was visit Warner Brothers for the Harry Potter Studio Tour and it was seriously amazing. It is located where the actual films were made and is seriously a must-see for any Harry Potter fans visiting London!

The studios are located just outside London and are pretty easily accessed by train, but you do need to book your tickets well in advance. They recommend setting aside at least 3 hours to do the tour, but we were there for closer to 4 hours without feeling like we were actually dawdling at all – that’s how much there is to see! 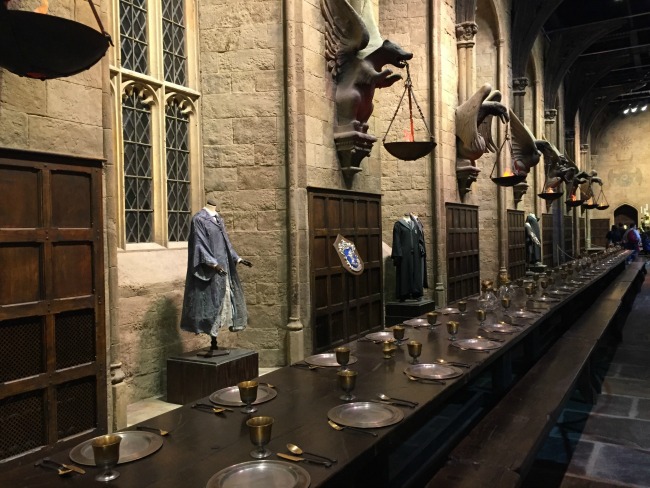 You start the tour in the Great Hall which is lined with tables and actual costumes from character from all 4 houses. The costume on the left below is Harry’s from the first film – look how tiny it is! 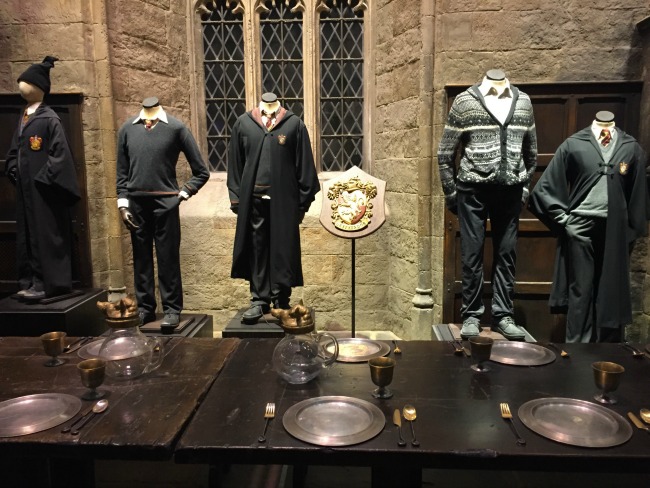 You then move into the first of two sound stages, this one dedicated to internal sets, costumes, props and the like. It was mind-blowing to see and read about all the work that went into designing the many, many sets that were required for the series of movies, and just how many people worked on them. It was things like the fact they had a team of people paint over 350 oil paintings to hang in the castle, people make giant tapestries to cover the walls of rooms and sculptors to create huge stone sculptures that really brought home how huge this task was, and how much detail went into it. Seeing it in person really was incredible.

They had lots of the most memorable sets, including the Gryffindor common room & dorm room, Dumbledore’s office, the Potions room, the Burrow, Hagrid’s house, the Ministry of Magic and many, many more. 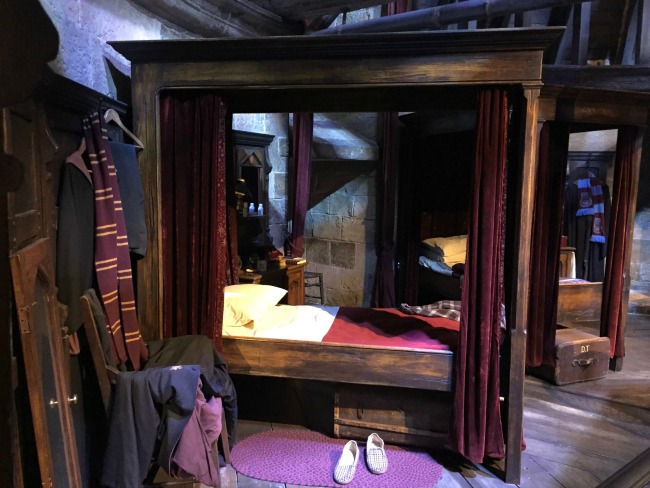 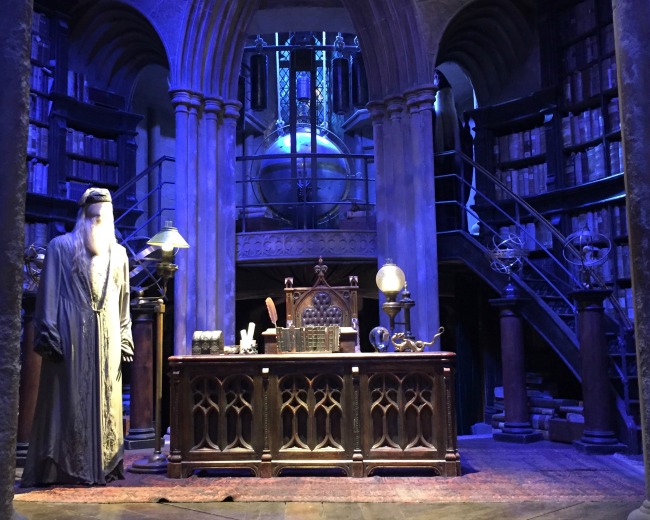 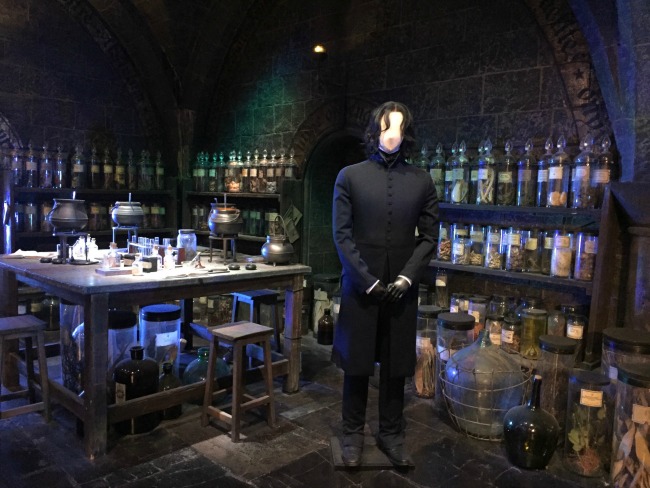 Each of the sets included a costume or two of a relevant character, as well as dozens and dozens of props, and an explanation of how the set came to be. I loved seeing all the ingredients lining the walls of the Potions Room (all of which had a hand written label!) which included everything from plants to preserved meat. The cauldrons even stirred themselves! 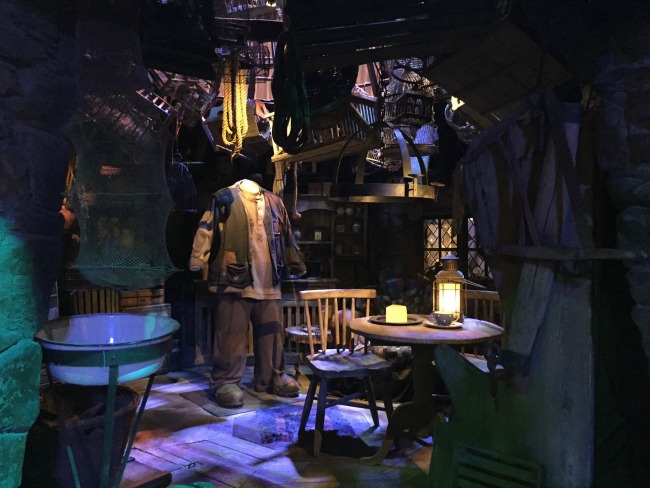 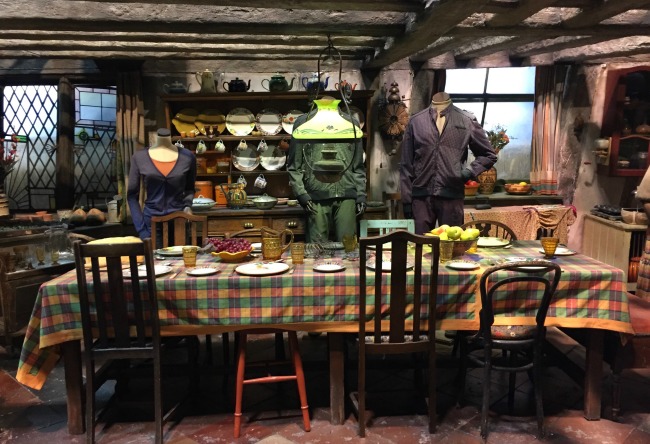 There was also a section where you got to see the mechanisms behind the broomsticks and see footage of how they managed to film it to make it look like they were actually flying. We then got to take it in turns to jump on a broomstick and take it for a ‘fly’ with a green-screen background which was way more fun than I thought it would be!

We then went for a wander through the Hogwarts Express, pushed a trolley through the wall at Platform 9 3/4 and enjoyed a Butterbeer, before heading to the outside sets! 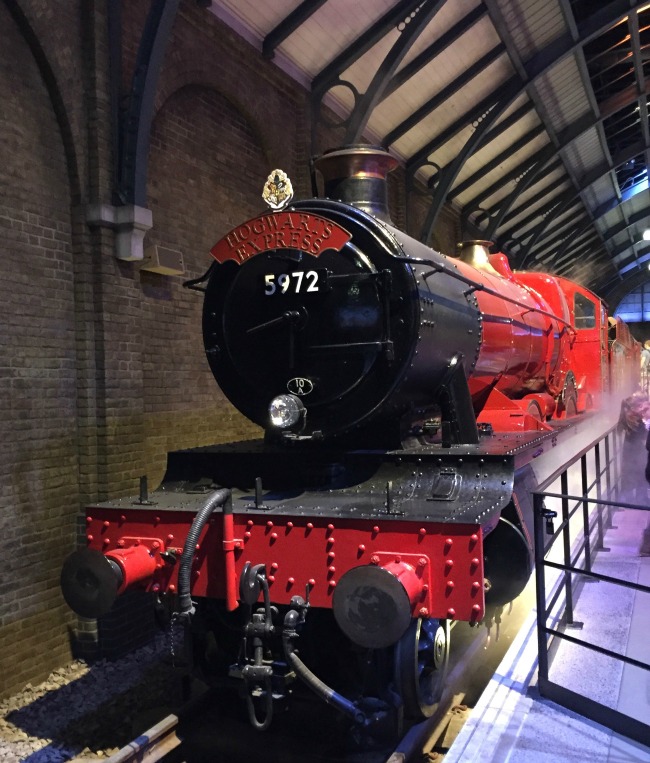 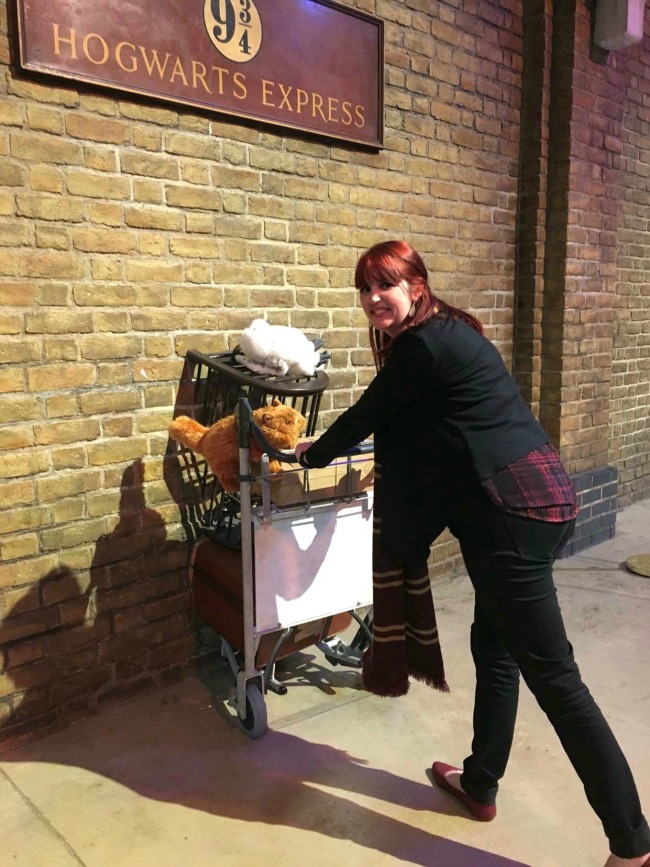 In the courtyard outside they had a number of the exterior sets, including the Knight Bus, a section of the bridge from the castle (turns out they only made one section then just multiplied it digitally!), Harry’s family home and more. 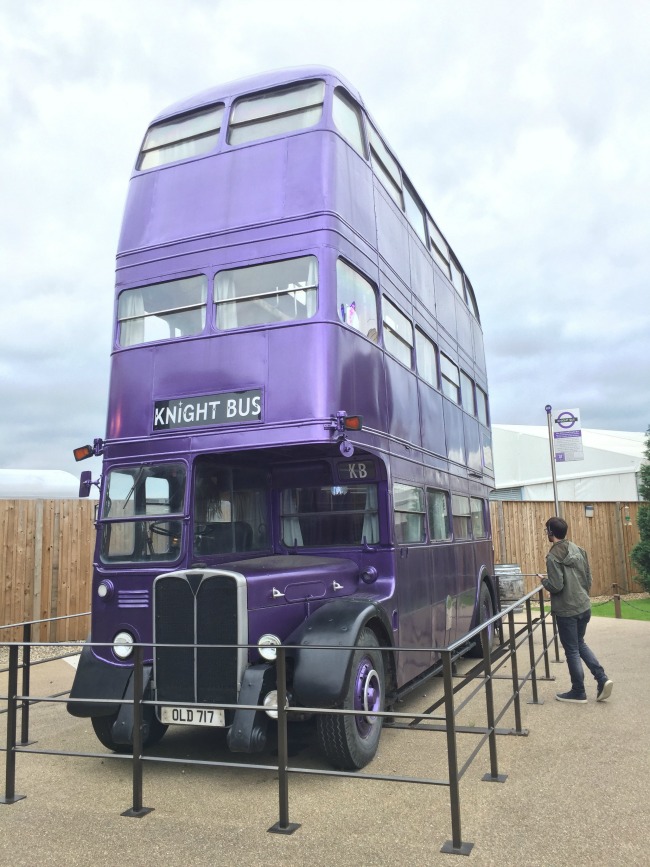 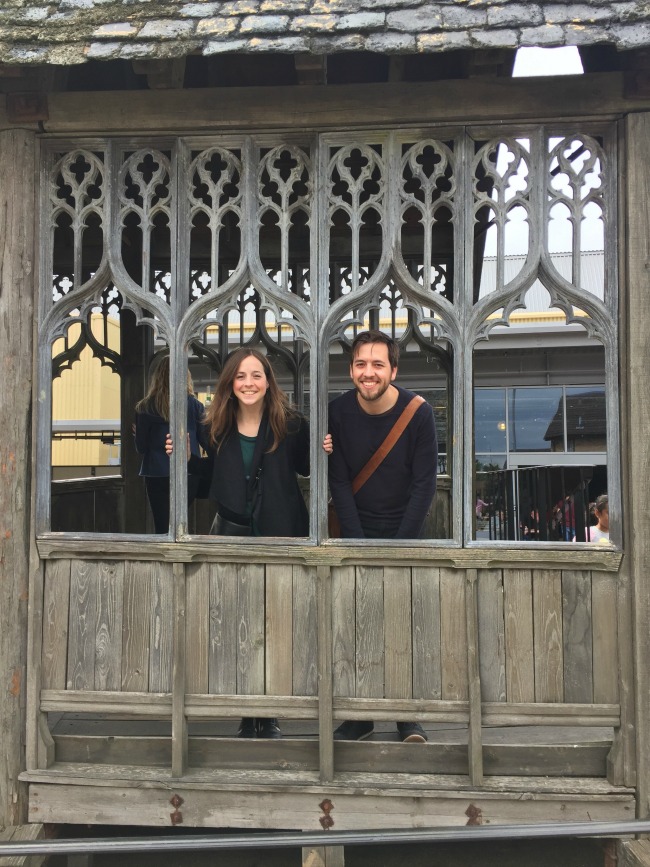 We went inside a section of the home at Privet Drive and saw the letters all flying around, then hopped in both the flying car and on Hagrid’s motorbike – it was so good to get to actually sit inside all these actual props from the movies! 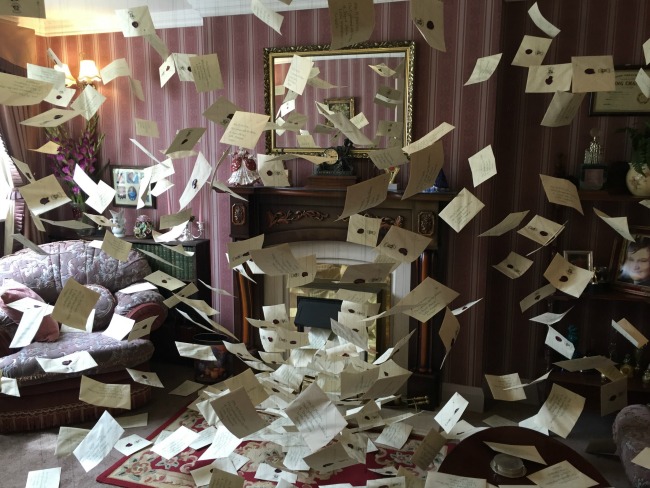 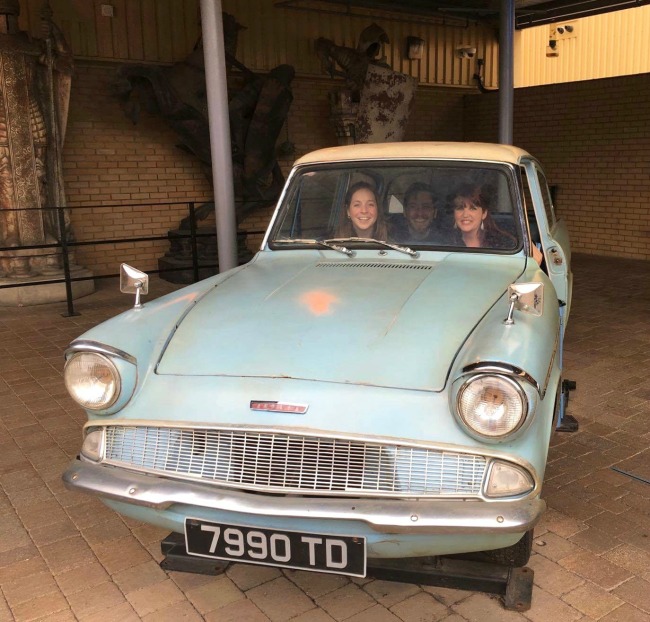 The second sound stage was dedicated to makeup, prosthetics, animatronics, design and the like. We got to see all the work that went into making all the incredible creatures like dragons, house elves, the hippogriff and the like. They were serious feats of engineering and design, and they had hundreds of people working on them behind the scenes. The prosthetics were fascinating too – seeing someone get transformed into a goblin was pretty amazing!

I also loved seeing all the sketches, models and artwork that were created to help turn the descriptions in the books into what we see on the screen. There was a room dedicated to detailed cardboard models of each set that was then built, and incredibly beautiful art work which I would love to have hanging on my wall.

We then went for a wander through Diagon Alley and peered through the windows of all the amazing shops, with my favourite being the Weasley’s Joke shop and its giant moving head. 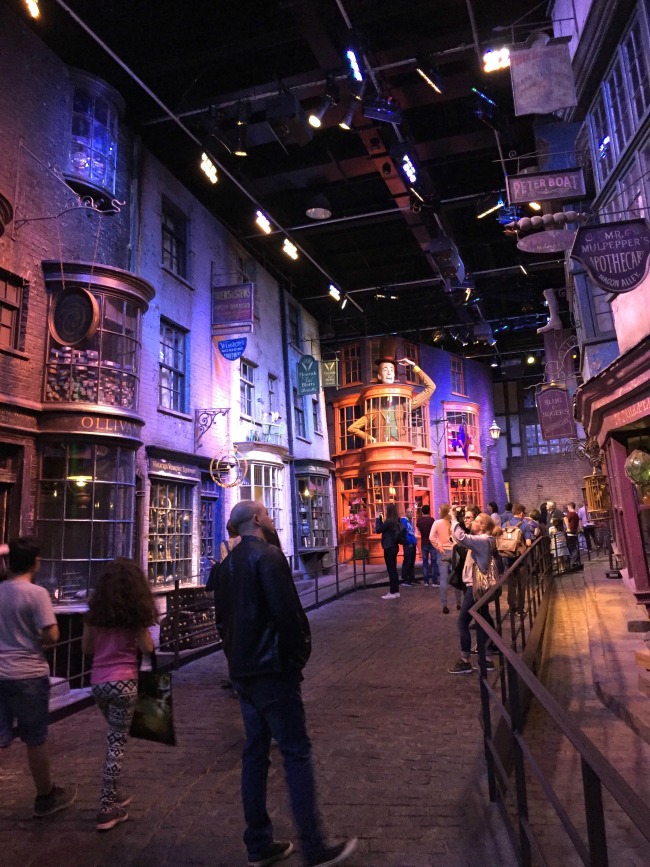 Last but definitely not least was the room that was filled with a huge, incredibly detailed model of Hogwarts Castle, made out of stone. We spent ages wandering around the model taking it all in, it was truly mind blowing. Turns out that most of the external shots of the castle in the movies are of this model (that’s how detailed it is!), with the actors green-screened on top of the footage. Incredible. 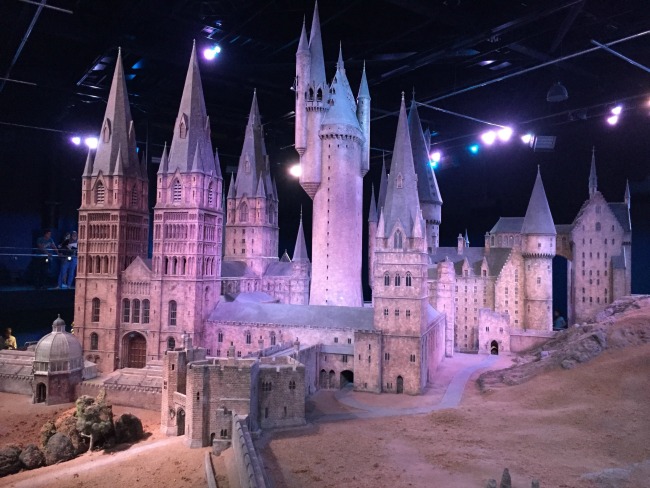 We then emerged back into the sunshine, fairly overawed with everything we had seen and proceeded to travel back in to London, go home and sit down to re-watch one of the movies! It wasn’t the cheapest of activities (entry is £35) but given we were there for 4 hours it definitely felt like we got our moneys worth! If you are a fan of the books and/or movies, or just movie making in general I would highly recommend a visit!

I Spy Plum Pie is Liz, a mid-20s kiwi-born, Melbourne raised girl who is passionate about the environment and sustainability, food, exploring and learning new things. Join me on my journey to a happy, sustainable life!
July 20, 2016 by I Spy Plum Pie (admin) | 4 Comments