I’ve been lucky enough to visit London a number of times in my life, so this trip was less about hitting the big name tourist sites and more about London exploring more generally. In between visiting markets and spending time in pubs and restaurants with friends that live in London I did a whole lot of walking and exploring, so I thought I’d share some of the highlights with you today!

On my first full day in London back in May I went for a very long walk to take in many of London’s most famous historical buildings, including Westminster Abbey, Houses of Parliament and Big Ben and St Paul’s Cathedral. They really are all feats of architectural beauty, even on a fairly grey ol’ London day! 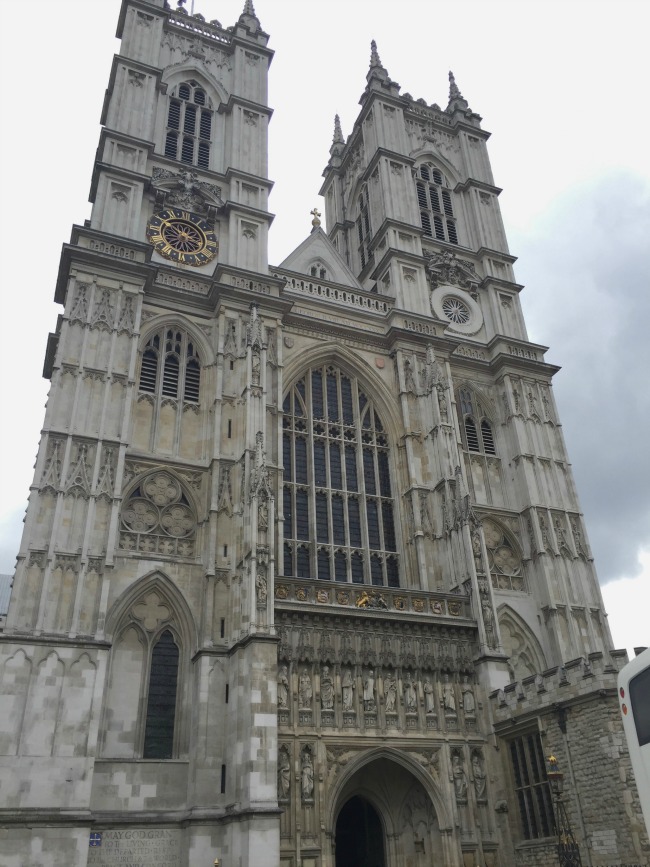 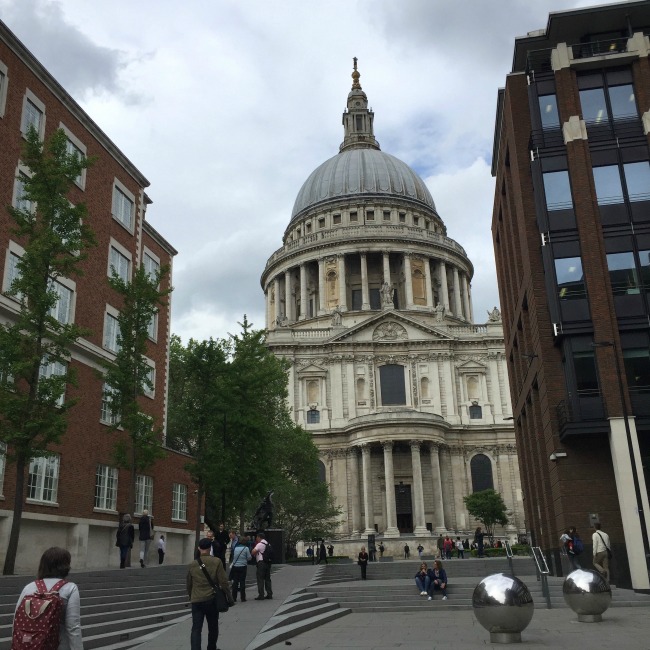 I popped into the Tate Modern (which was just about to have a massive re-opening of half the building!) where there were some free exhibits of art relating to mass media and social realities which I found really fascinating. They included works by artists like Picasso, Andy Warhol and Mondrian which were really amazing to see in person.

I continued along the Thames and got a great view of the new features of London’s skyline including the (in)famous gherkin and walkie-talkie buildings. 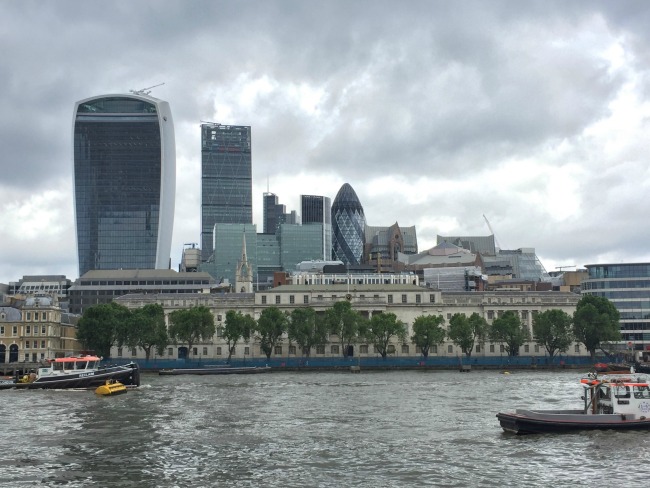 Another highlight of my London exploring adventures was enjoying a traditional English style Sunday roast – vegetarian style! We went to the Jolly Butcher in Stoke Newington which had not one but two vegetarian options, including homemade vegetarian gravy! My choice was the baked goats cheese which was stuffed with sweet potato, cranberry and mixed nuts and came with the whole works – Yorkshire Pudding, roast potatoes and veggies. I was one very full, but very happy camper after this feed! 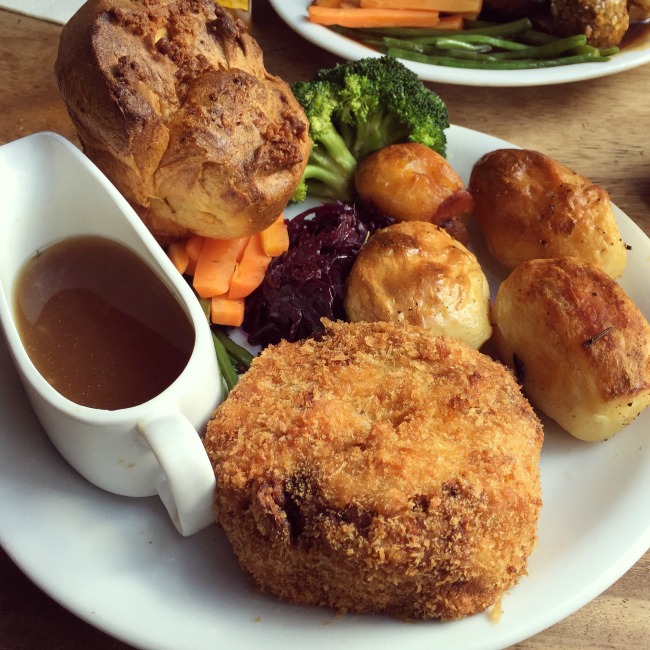 On a very rainy London morning I met a friend for a wander down Oxford Street for some very unsuccessful shopping (but not without trying!) then a meander down through Soho and Covent Garden where thankfully the sun decided to join us again. 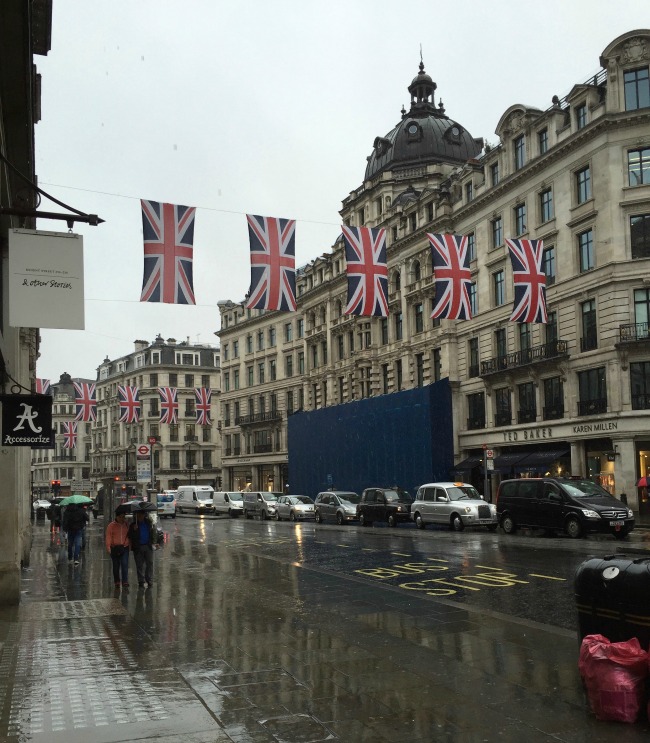 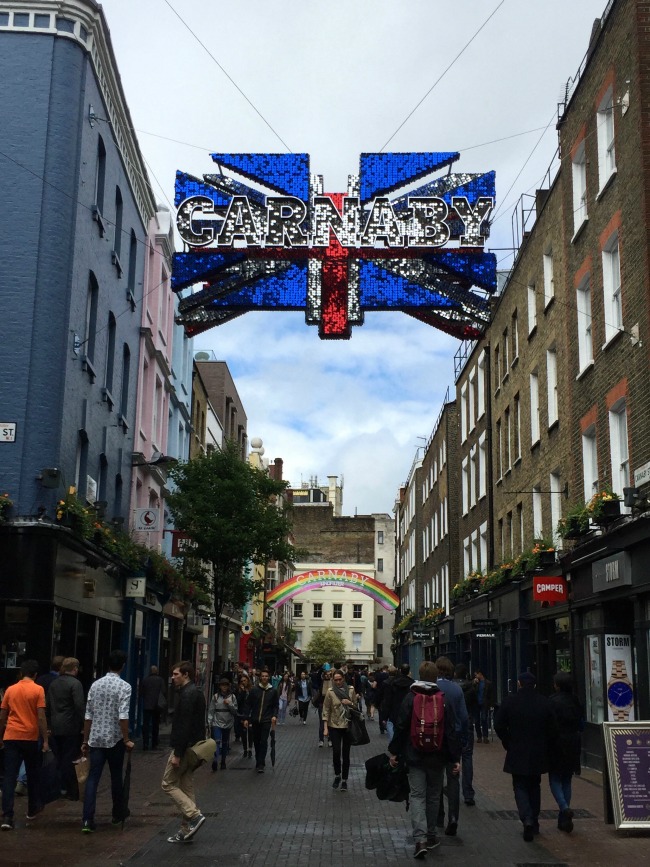 I decided no visit to London is really complete without a visit to see ol’ Queenie (as my mum calls her!) and to take in some of London’s beautiful parks. For such a large, busy city they really do know how to do green spaces well, with spots like Hyde Park a prime example of that. It’s such a great place to unwind and take a break from the hubbub of the city, yet it’s only a stones-throw from everything. 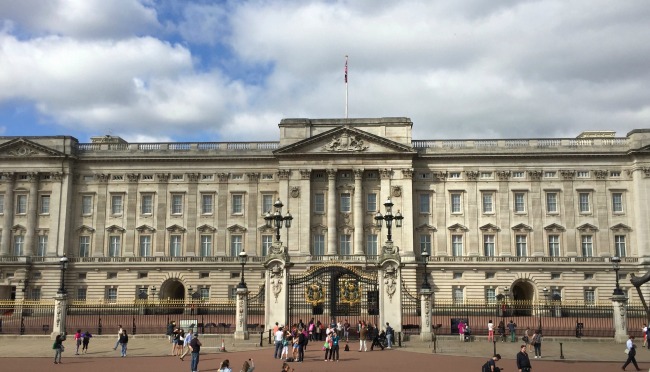 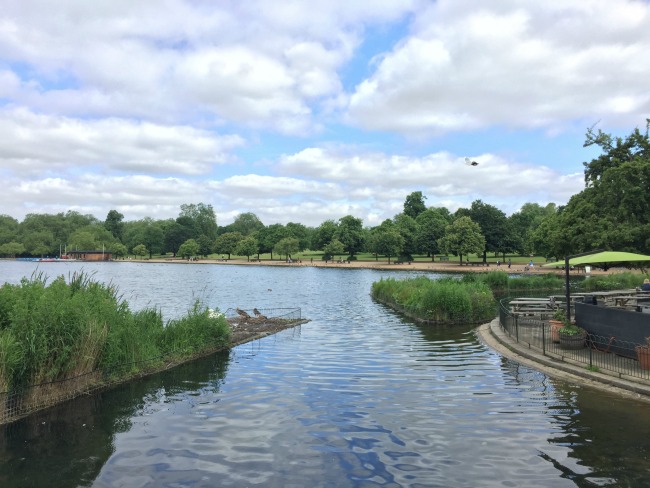 My London wanderings then took me to Harrods were I visited the only floor I could afford anything – the food hall – and picked up some goodies for my English-born Grandma. It really is such a beautiful building internally and externally, even if everything is hideously expensive! 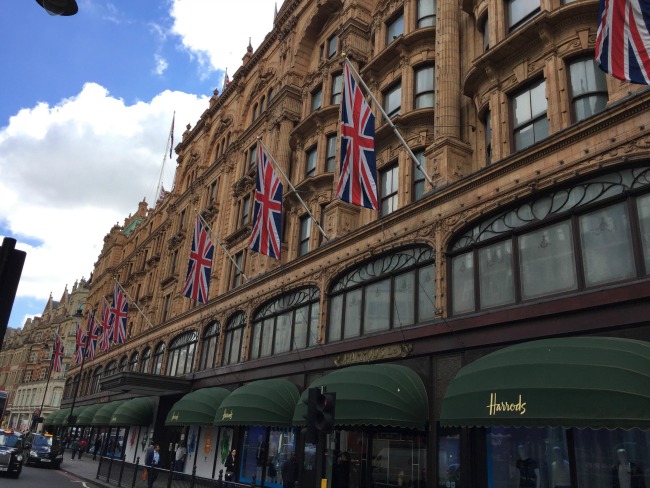 Another part of London well worth a visit is Exhibition Road where you will find the National History Museum, the Science Museum and the Victoria and Albert Museum, all of which are housed in incredibly beautiful buildings. 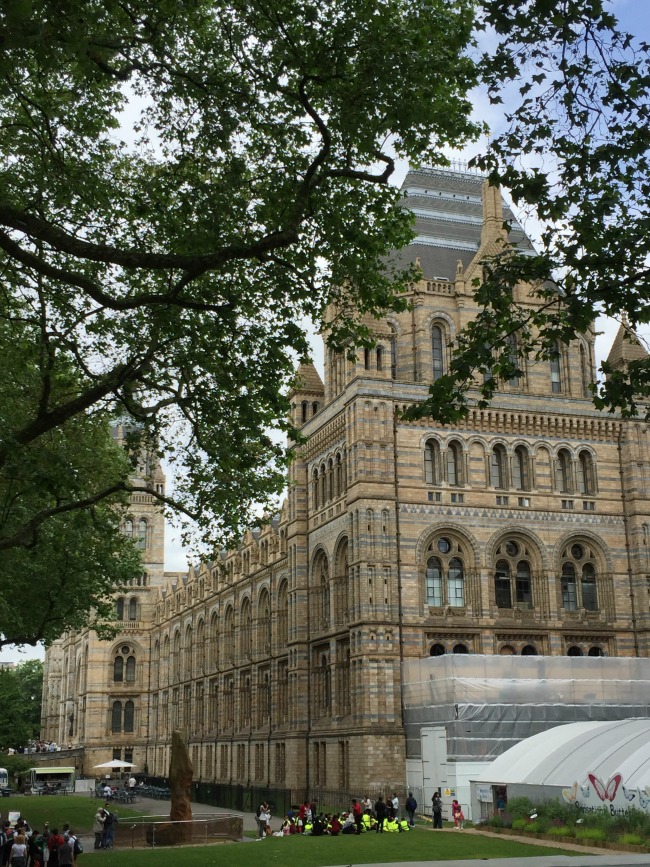 Entry is free to at least part of each museum so they are well worth a wander through, with the Victoria & Albert Museum being one of my personal favourites. It houses an incredible collection of art and design, as well as a gorgeous central courtyard which at the moment includes a robot slowly building a pavilion which was pretty amazing to see.

Just up the road from Exhibition Road is the Royal Albert Hall – one of the most famous music venues in the world, and has been open since the 1870s. The front of the building is currently under refurbishment but the back is still very impressive! 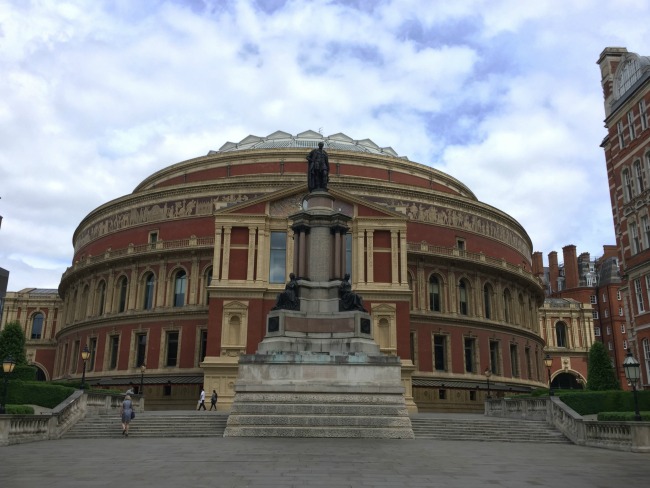 Nearby is another of London’s famous gardens – Kensington Gardens – a 265 acre park which includes a lake, vast expanses of open grass and wooded areas, the Diana Memorial Playground as well as a more formal English garden which I loved wandering through. 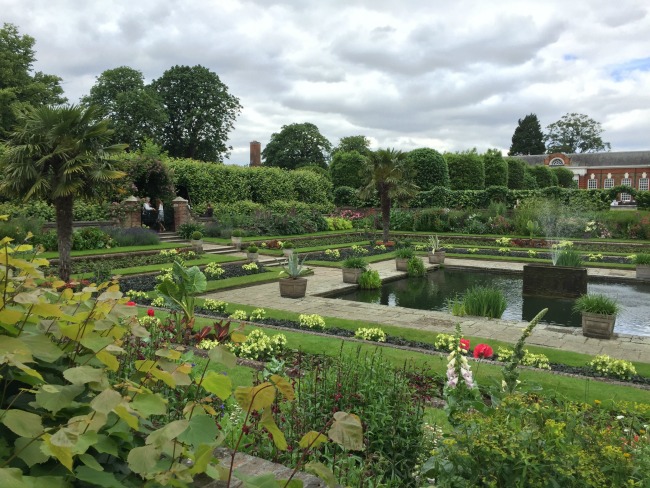 The last part of my London exploring adventures took me through the streets of Notting Hill and Kensington, past all the gorgeous colourful houses, cute little antique stores and through the Portobello Road market. 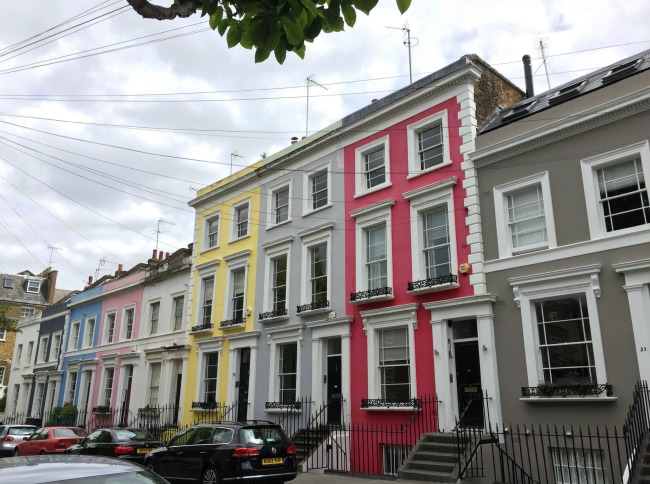 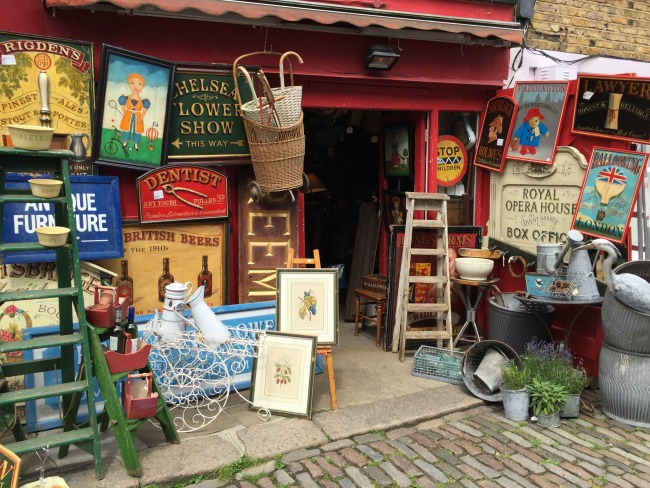 I even wandered past the bookshop that featured in the movie Notting Hill! 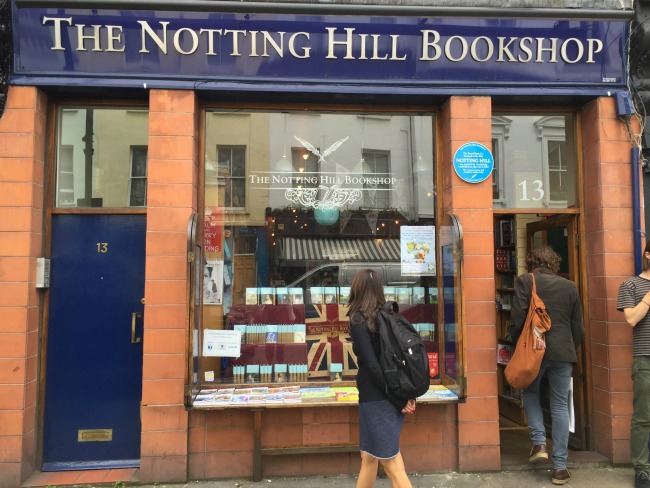 And that, my friends, was my London exploring adventures! I did a whole lot of walking (over 20km on two of the days!) but managed to squeeze a lot of sightseeing into my few exploring days that’s for sure!

Have you been to London before? What are your favourite things to do?

I Spy Plum Pie is Liz, an early 30s kiwi-born, Melbourne raised girl who is passionate about the environment and sustainability, food, exploring and learning new things. Join me on my journey to a happy, sustainable life!
July 13, 2016 by I Spy Plum Pie (admin) | 0 comment