Today I want to explore the problem with helium balloons and what we can choose in their place. They might be pretty (and I spent a few years working in a party shop so I know them well!) but they are unfortunately having a huge impact on our environment. 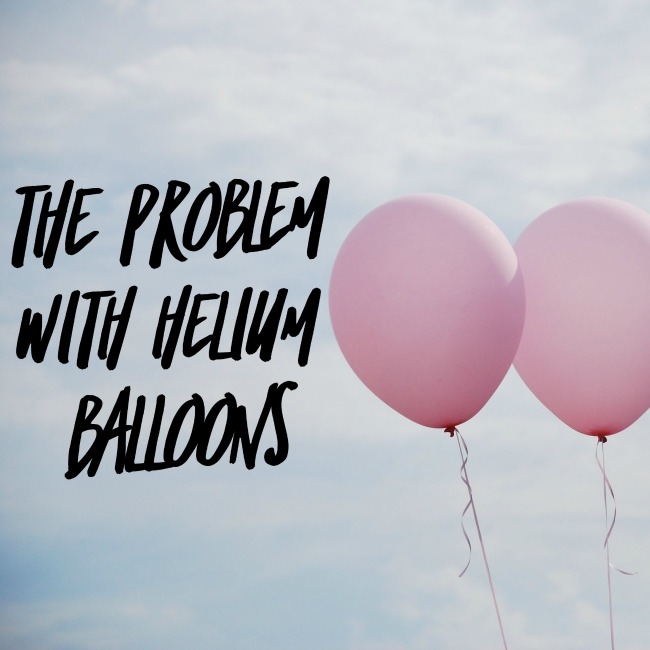 The issue in numbers

The release of helium balloons to mark events (or by accident by children!) can be a symbolic moment for lots of people, but unfortunately those balloons then end up in our environment. They can travel hundreds of kilometres before ending up on the land or the sea, and they take years to properly break down. Whilst it’s pretty hard to get any absolute numbers on helium balloons in the environment, studies show they are washing up in greater numbers on beaches and make up a large proportion of marine waste.

So, what’s the problem with helium balloons?

The key problem with helium balloons is the impact they are having on wildlife and birds. The animal is usually killed by the plastic blocking their digestive tract and slowly starving to death. They can also be killed after becoming entangled in the balloon or its ribbon which can cause strangulation or trap the animal. Turtles and sea birds are the most likely to be killed, particularly as a burst balloon can easily be mistaken for a jellyfish. However, there have been plenty of reports of land animals like cows, sheep and dogs also being killed.

The release of helium balloons also results in some pretty serious environmental pollution, with small bits of plastic ending up scattered throughout the landscape and waterways, no matter how remote. It’s unnecessary litter that we’re stuck with for many, many years. There’s also lots of chemicals involved in the making of balloons in the first place, which also impacts on our environment in the wider sense.

The third problem with helium balloons is that they use, well, helium! It is a finite resource which is getting more and more scarce, and experts are warning we should be conserving it for more important uses. Given helium is needed for scientific and medical purposes I think it’s probably best we leave enough for them!

What are the alternatives?

One argument is that most helium balloons are made out of biodegradable latex, which should mean they don’t do too much damage once they have burst. There doesn’t appear to be a clear answer on just how long they do take to break down though, especially in water, so there’s still every chance of them doing some serious damage in that time.

The first way to reduce the impact of helium balloons is to make sure they aren’t released into the atmosphere. If you’re somewhere that has them as decorations be sure to pop them and dispose of them properly.

The best way however is to try and avoid having them altogether! Zoos Victoria is running a campaign to get people to switch from balloons to bubbles to mark important occasions and for outdoor events. Other alternatives include decorating with bunting or banners, or planting trees as a memorial instead.

What can you do to help?

An excellent first step is to sign the Zoo pledge above and then commit to choosing environmentally friendly alternatives for your next event. Every balloon avoided is an excellent outcome for the environment!

I hope this post was useful! I’d love to hear your thoughts about the problem with helium balloons as well!

I Spy Plum Pie is Liz, an early 30s kiwi-born, Melbourne raised girl who is passionate about the environment and sustainability, food, exploring and learning new things. Join me on my journey to a happy, sustainable life!
March 15, 2017 by I Spy Plum Pie (admin) | 3 Comments

3 Comments on The Problem With Helium Balloons