The architecture in Budapest was something that really blew me away, and thankfully the city has some great spots to take in the views, most notably Gellert Hill. In today’s Budapest Exploring post I wanted to share some of my favourite buildings and views with you all!

Construction of many of Budapest’s most famous buildings occurred around 1896, to celebrate 1000 years of settlement. As a result they are grand, beautiful and in very prominent locations, and the Parliament buildings are no exception! Located right on the bank of the Danube I got an amazing view on my boat trip, but it was even more stunning up close. 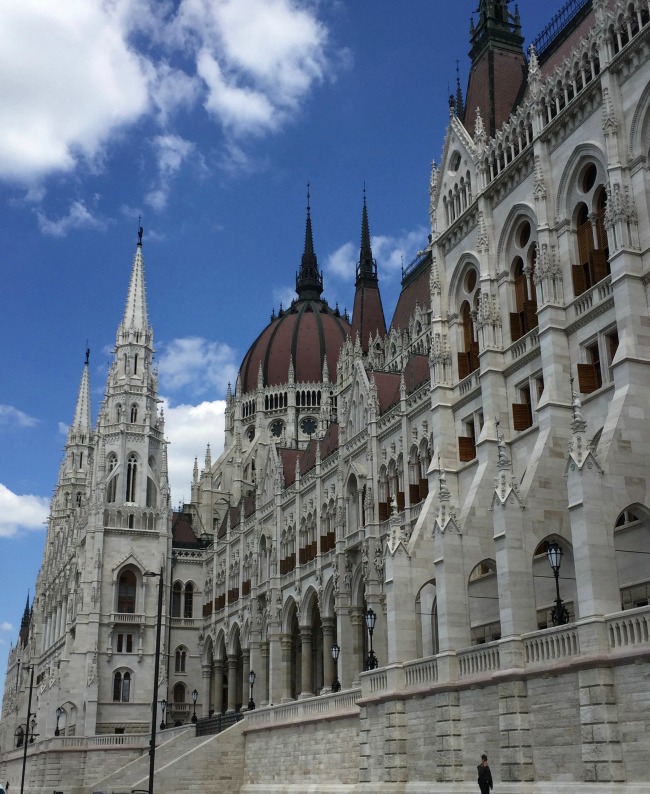 It is built in a Gothic Revival style and has a perfectly symmetrical facade, with a central dome and reaches 96m tall. This is the same height as St Stephen’s Basilica which was built around the same time, with the 96m height in reference to the 1896 celebration of Hungary’s millennium. I loved that fact! 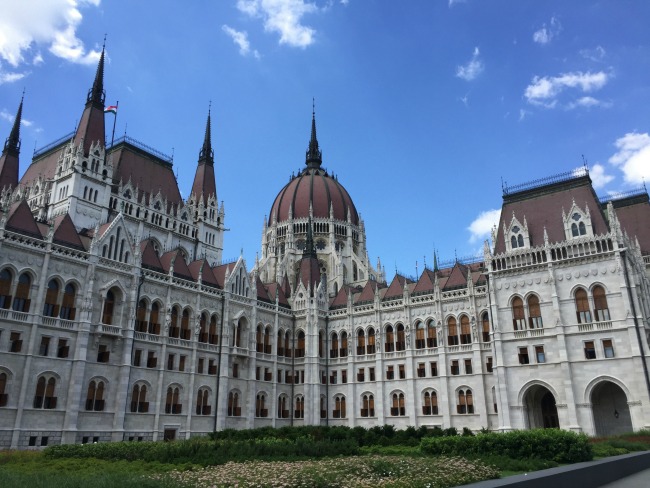 I didn’t go inside the building as there are only a limited number of tickets available each day, but I’d definitely like to go back and do that one day! I did make sure to walk along the river near the Parliament to see the Shoes on the Danube Bank memorial which commemorates the Jews that were killed in Budapest in 1944-45 by being shot into the river, as they were made to take their shoes off first. It was an incredibly moving installation, with shoes of all kinds and sizes, and one that I recommend you definitely don’t miss. 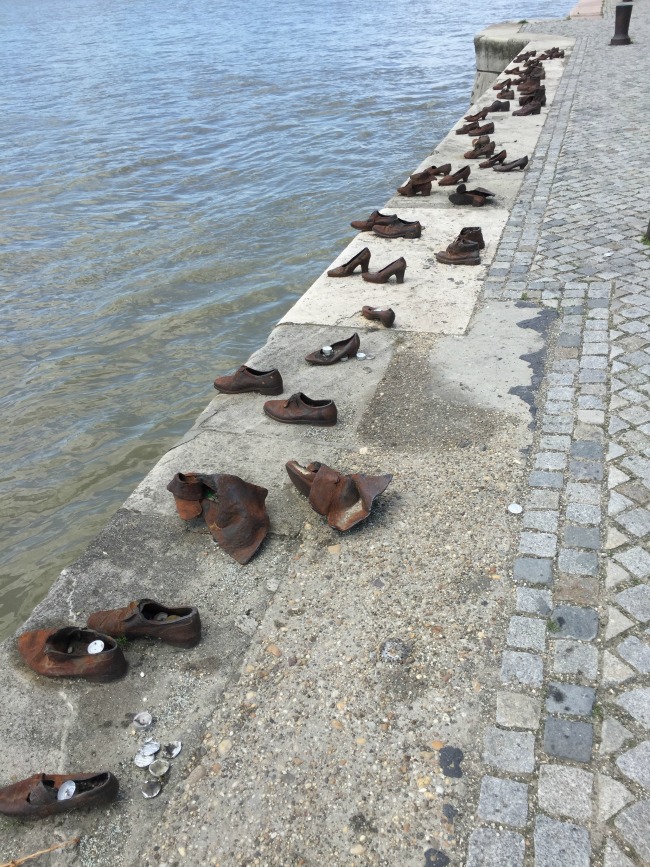 As I mentioned, St Stephen’s Basilica also stands 96m tall, and was completed in 1905. It is named after the first King of Hungary, whose apparently incorruptible right hand is said to be housed inside. 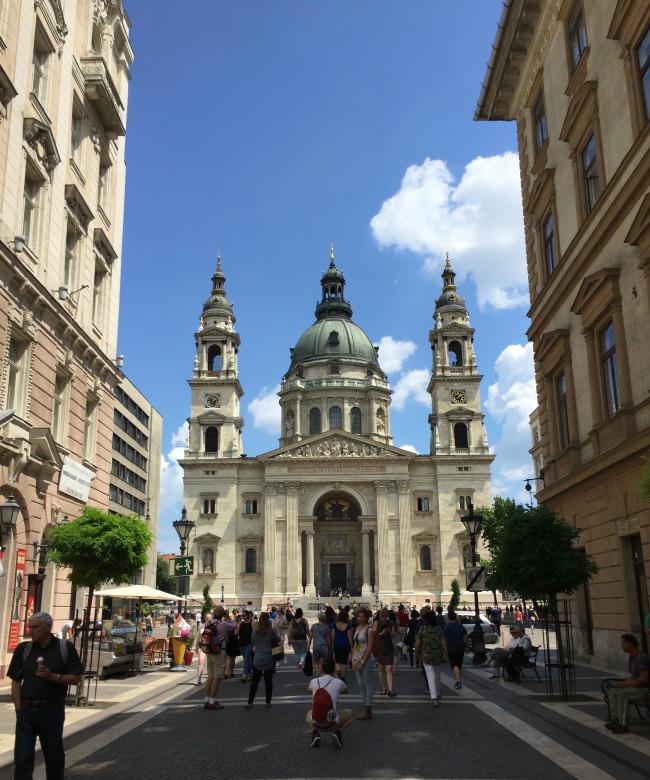 I didn’t go inside the Basilica, but instead chose to climb the 364 stairs to access the dome and boy am I glad I did. It cost 500 HUF (and there is a lift you can take) and the views from the top are nothing short of breathtaking. 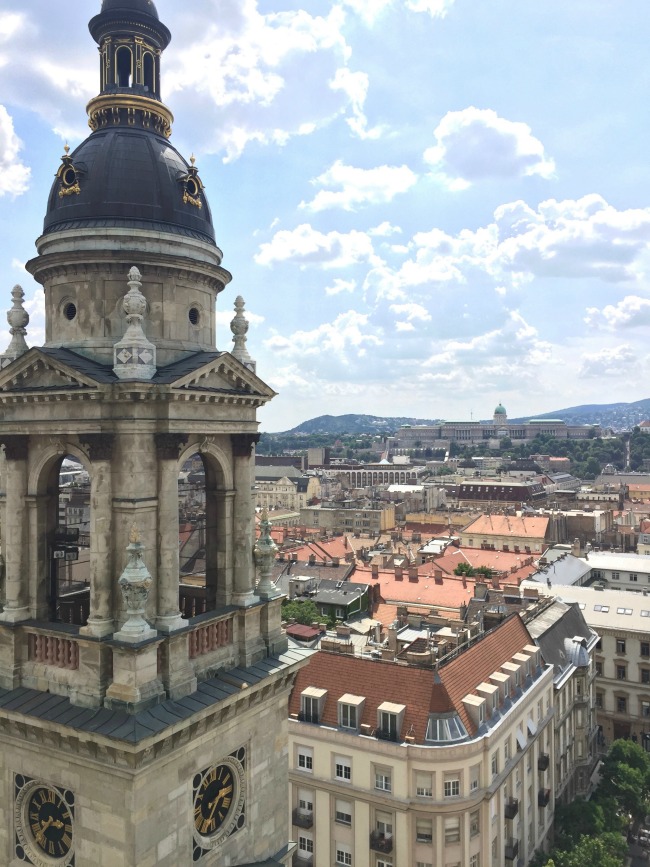 You get a 360 degree view of all of Budapest, and I was lucky enough to get a gorgeously clear day, so I could take in absolutely everything. I spent ages wandering around taking in all the architecture, both the huge impressive buildings and the cute little streets, all of which was just so beautiful. 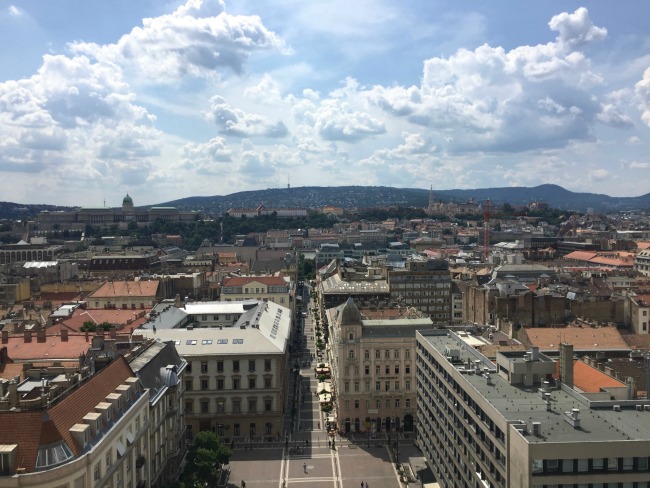 I went up on one of my last days in Budapest so it was great to be able to spot all the places I had explored on the previous days, and really get a feel for the layout of the city. I would definitely recommend going up the Basilica – and if you take the stairs then you’ve got more room for Hungarian cakes or ice cream afterwards! 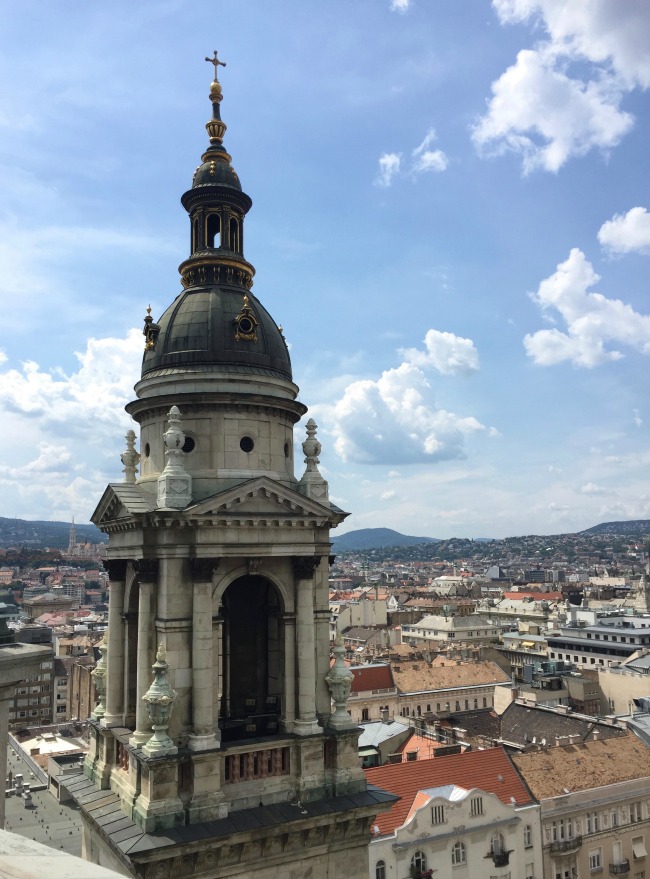 Opera Houses are often some of my favourite buildings to explore, and the one in Budapest was no different. There were no shows on during the weekdays that I was there, so instead I took a tour of the building which was incredibly interesting. 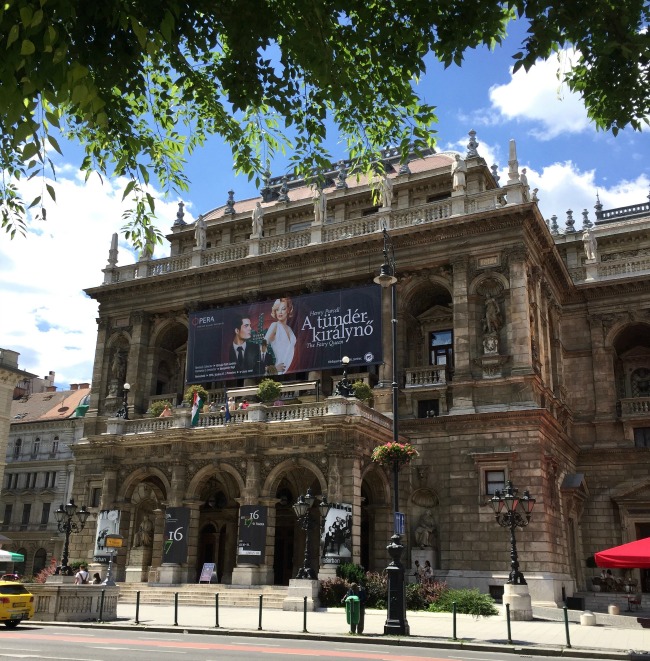 The Opera House was opened in 1884 and the inside of the building is ornate and richly decorated. Our helpful guide took us through the marble columned foyer with its mural covered ceiling, then upstairs to see room after room of gorgeous interiors. 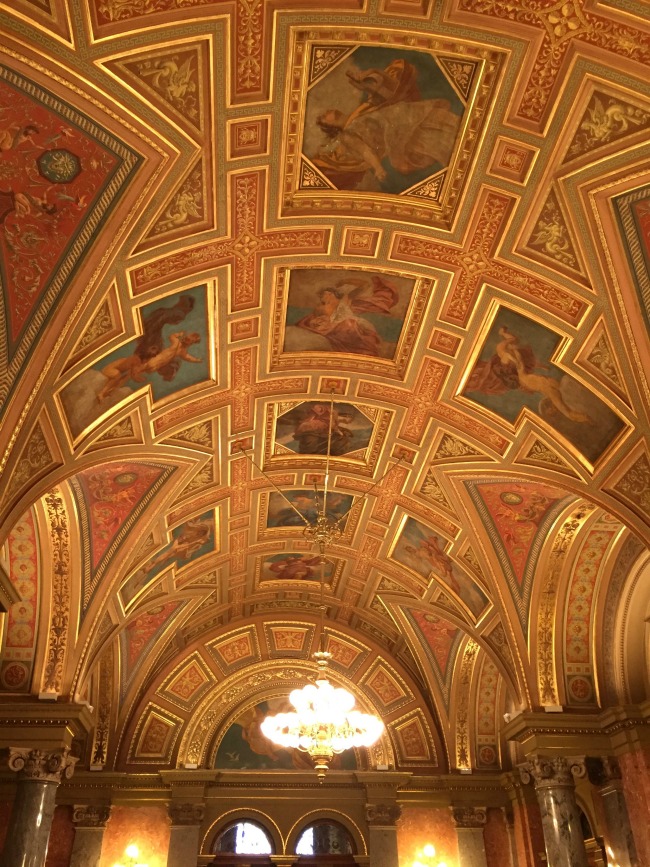 The main hall itself seats over 1200 people and includes a 3000kg bronze chandelier in the middle which was unsurprisingly amazing to see (but basically impossible for me to get a good photo of!). We even got to stand in the Royal Box which is even more richly decorated, with velvet curtains and plenty of gold decoration, complete with very comfortable looking seats (which we were not allowed to try out!) 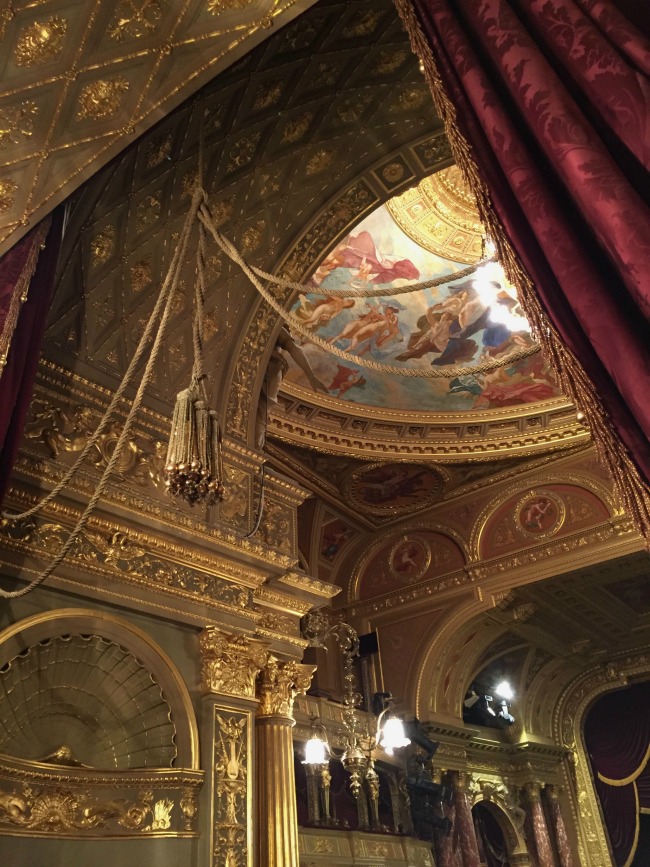 The tour ended with a short performance of two arias, which took place on the main staircase. Somehow I ended up being pulled up the front with the performer, who promptly popped a large hat on my head and made me march around, all while singing at me in Hungarian. Thankfully there is no photographic evidence of that taking place! 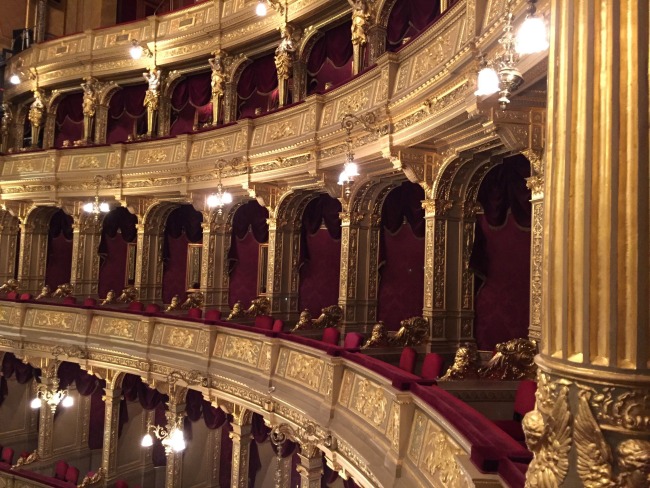 The Opera House tours take place in many languages daily at 3pm and 4pm and cost 2,900 HUF (slightly more if you wish to stay for the performance, which I recommend you do even though I ended up part of it!). It was such a beautiful building so I’m very glad I got to spend some time exploring it!

Gellert Hill is located on the Buda side of the city and is named after a bishop who was thrown from the hill in 1046 in the pagan fight against Christianity. A statue of him is now located at the top of the hill, near the Citadel fortress which was built in 1849. The hill is also home to the Budapest Statue of Liberty which was put up during the Communist era, and unlike many of the other Communist monuments was left standing and is now seen as one of the symbols of the city.

Most people visit Gellert Hill because of its panoramic views of Budapest, and that’s exactly why I went there! 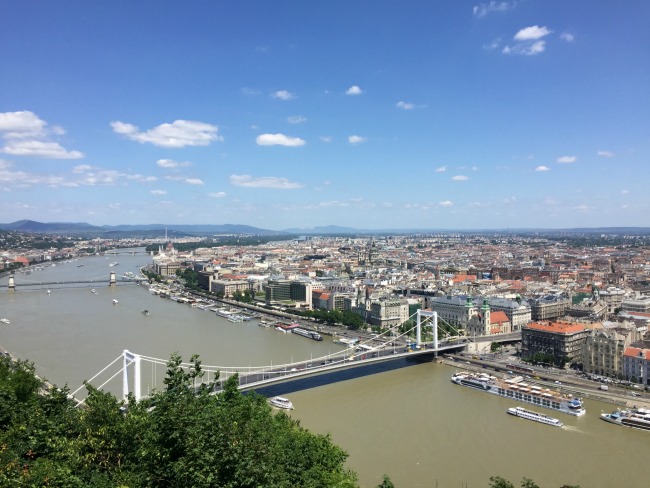 You can access Gellert Hill by taking a streetcar up, but I prefer to do things the hard way so despite it being a rather warm day I walked my way up there. It’s mostly straightforward, although at a few points the path split with no real signage, but I have a feeling I would have made it to the top no matter which path I took! 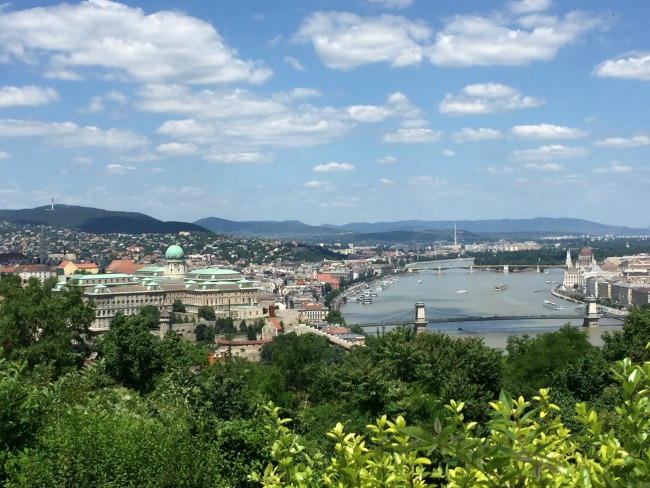 The view was everything I had hoped it would be and it was definitely worth the effort of walking up there. I spent ages just wandering around taking it all in and picking out landmarks in every direction. I even took a few awkward, sweaty selfies to prove I was actually there! 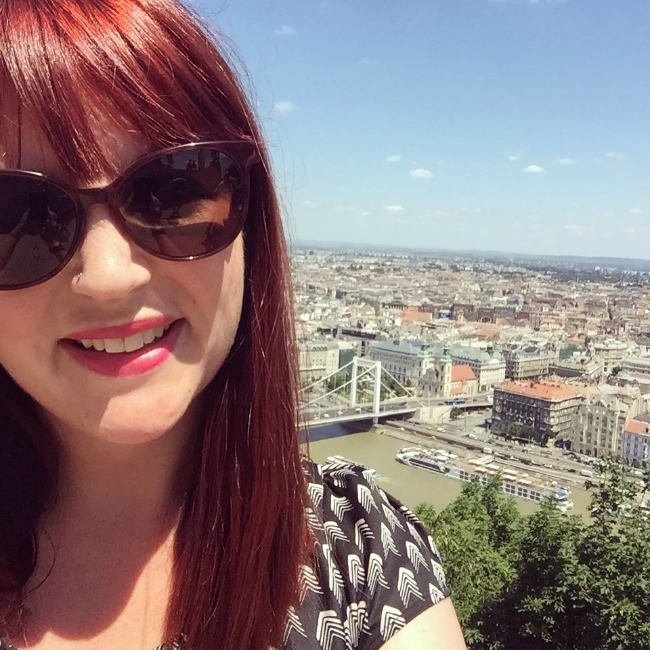 Climbing Gellert Hill was one of the highlights of my time in Budapest so I would most certainly suggest you do the same! It might be a little steep at times but it’s definitely do-able! Plus, it’s completely free!

Have you been to Budapest before? What were some of your highlights?

I Spy Plum Pie is Liz, an early 30s kiwi-born, Melbourne raised girl who is passionate about the environment and sustainability, food, exploring and learning new things. Join me on my journey to a happy, sustainable life!
November 2, 2016 by I Spy Plum Pie (admin) | 0 comment