East Melbourne is known for its beautiful, expensive heritage homes and well kept gardens, but not so much for its food or nightlife. That’s starting to change thanks to the addition of Square & Compass cafe to the hospital end of the suburb, bringing 7 seeds coffee & delicious food to the area. The folks behind Square & Compass have been involved in some of Melbourne’s most loved cafes (Barry, Touchwood, Pillar of Salt, Porgie & Mr Jones), so they certainly know what they are doing!

The cafe is in a cute little brick former residential building, with a few tables out the front and a few more out in the back courtyard. It is open for breakfast and lunch with one all-day menu covering both, as well as a selection of sandwiches, salads and sweet goods in the front cabinet. I headed over for lunch with my folks on the Queens Birthday holiday on Monday, and we were able to quickly snaffle a table once we made our way through the throngs of people grabbing coffee and sandwiches to takeaway (I have a suspicion they were on their way to the MCG for the afternoon’s footy game!).

The menu has a host of vegetarian friendly options, and covers everything from porridge and eggs to hearty salads, waffles, gnocchi and lobster rolls, so I think there’s pretty much something for everyone!

My dad went with the Omelette ($16.50) which was served with chargrilled leeks, hazelnuts and pecorino, and could come with either toast or a salad (he went with toast). It was a monster of an omelette, packed with the leeks and topped with crunchy hazelnuts. It disappeared pretty quickly, so it’s safe to say that it was very well received! 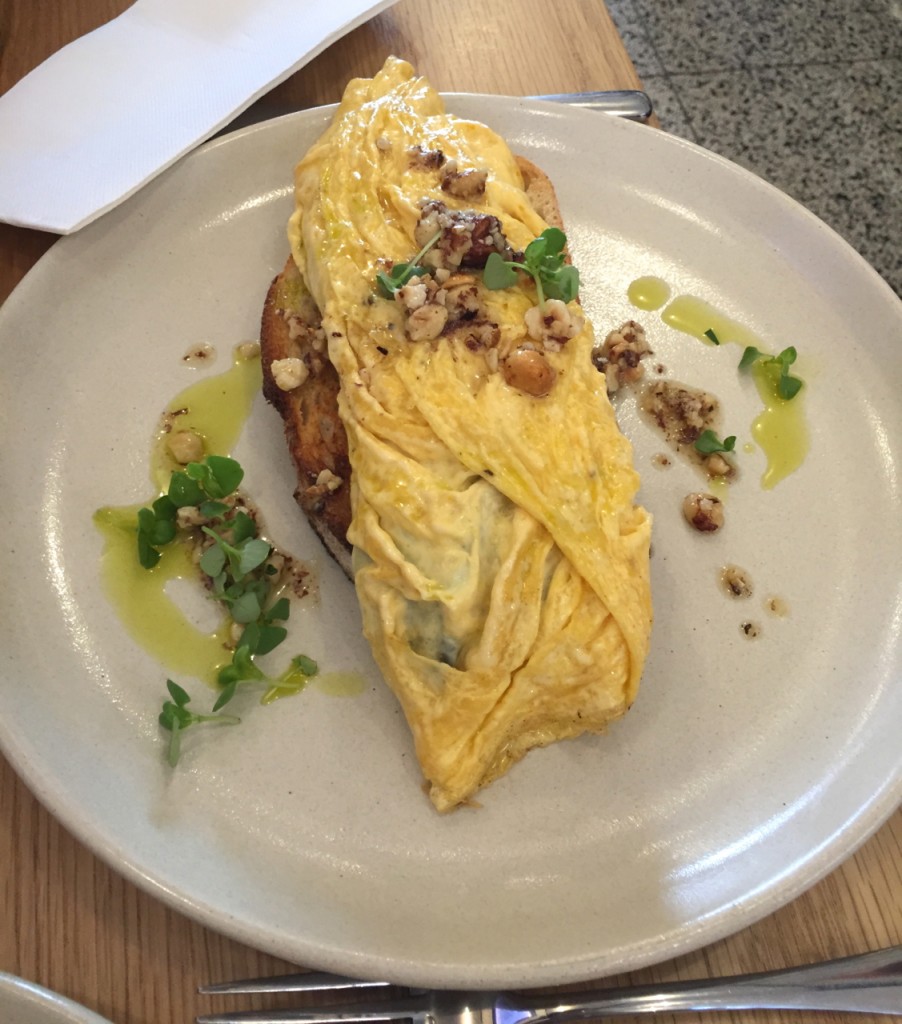 I ordered the Broccolini ($16.50) which came with poached eggs, smoked goats cheese, spiced nuts, chilli hair and lemon. This was super tasty, the broccolini was only lightly cooked so it still had plenty of bite to it, the eggs were perfectly yolky and the nuts provided an excellent crunch to the dish. The goats cheese was amazing as well, and the chilli hair was interesting although didn’t add much in the way of kick. This was a nice change from the standard poached eggs dishes you can find at most cafes, and I was a very happy camper after working my way through this! 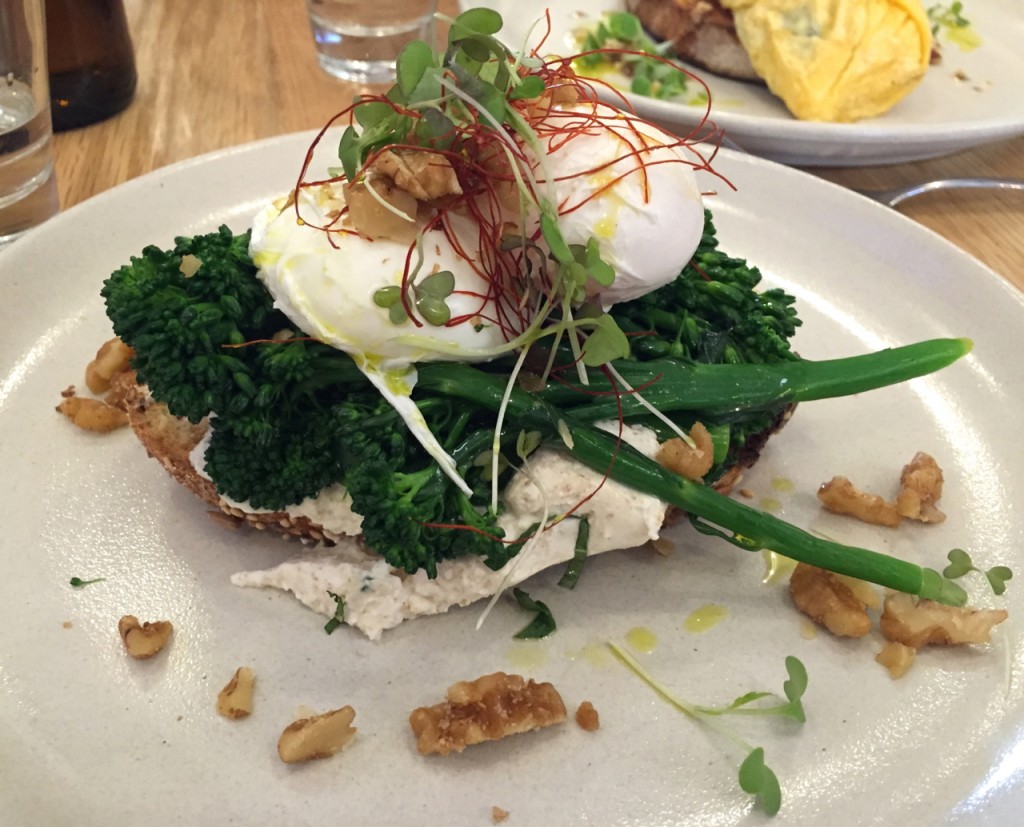 Mum ordered the Avocado ($16) which came with heirloom tomatoes, raw beetroot relish, charred lime, kale chips and smoked salt on toast, to which she added a poached egg ($2). This was another fantastic dish, although Mum wasn’t overly fussed by the kale chips (the phrase ‘dried parsley leaves’ may have been uttered!) but that didn’t really alter her overall enjoyment of this dish. She was particularly taken by the beetroot relish, so much so that she has plans to add beetroot to her veggie patch so she can make her own! That’s the sign of a delicious dish! 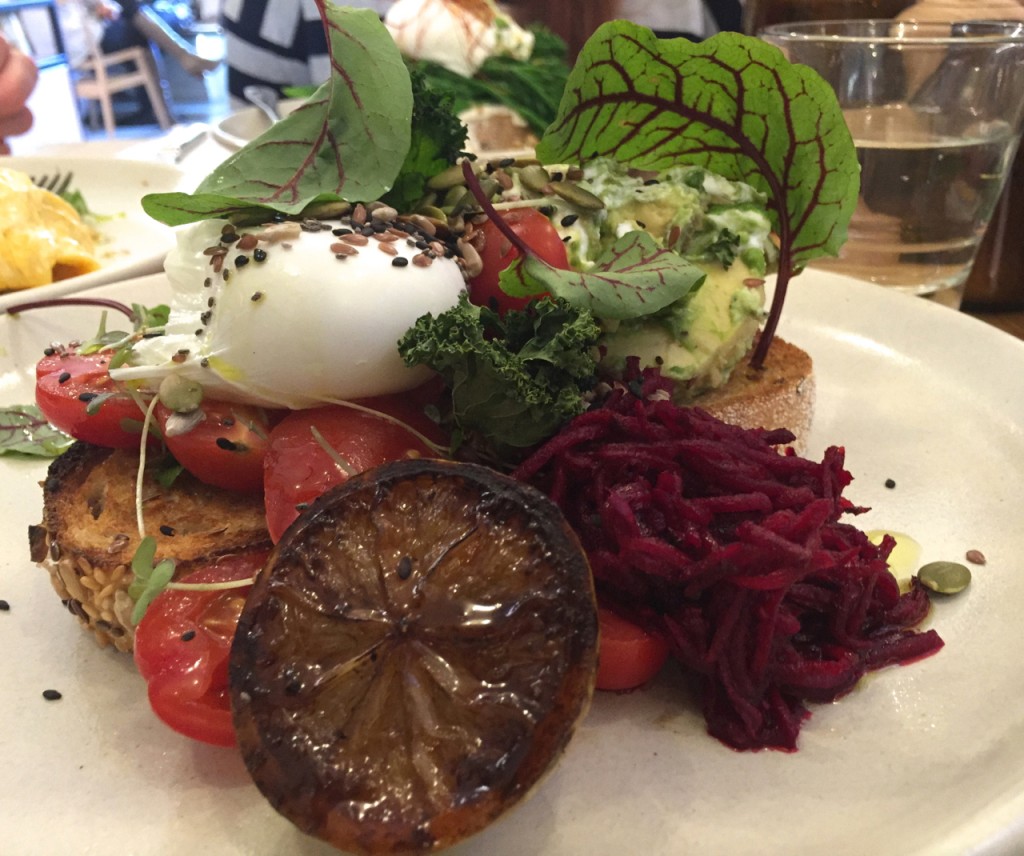 We then had coffees, with both my folks ordering long blacks ($4), which came with a small glass of sparkling water, as a proper long black apparently should (I don’t know, I don’t drink long blacks generally!). I decided to go with the iced coffee ($5) which was served with honey, milk & ice and came in a rather large jar. It was a super delicious iced coffee, with plenty of the coffee flavour coming through and just a hint of honey which I really enjoyed. It was an excellent way to finish a delicious meal. 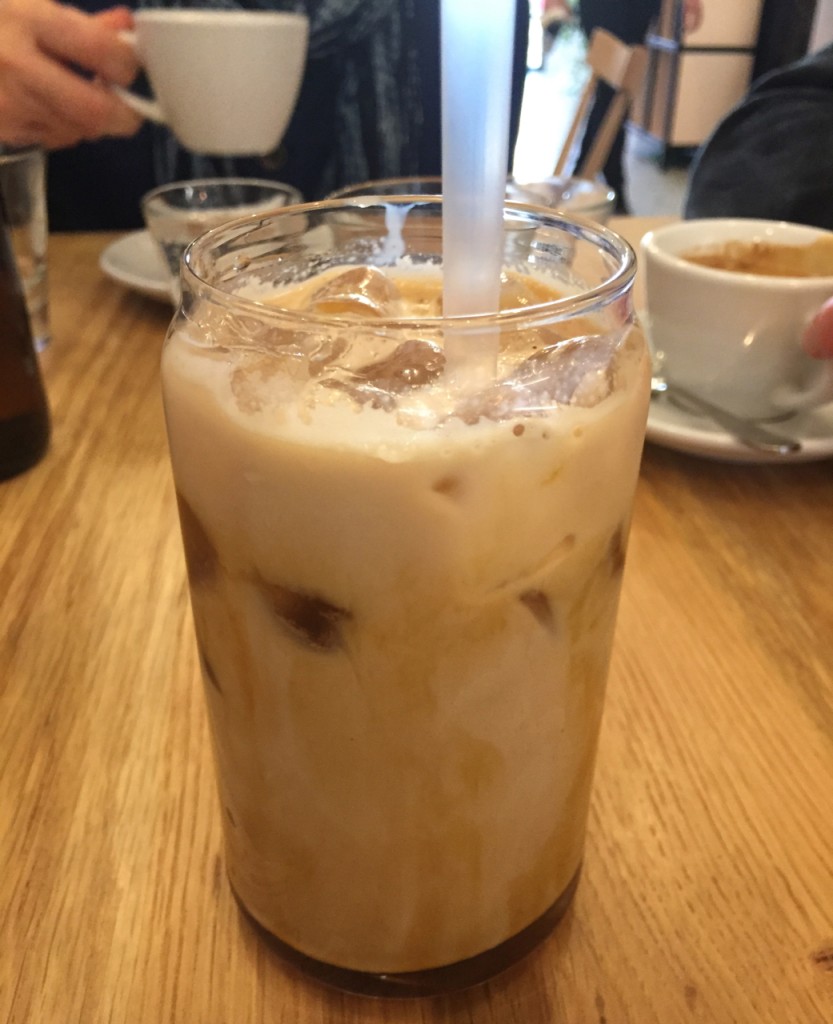 I’m pretty happy to have Square & Compass in the neighbourhood, the food was super tasty, the coffee was excellent and the staff were really friendly. The space is really nicely fitted out as well, they haven’t gone the all wood & white aesthetic that is so popular in Melbourne cafes at the moment, rather it is a modern take on the heritage of the building they are in, which I really liked. Turns out a guy I went to uni with designed the interior, so maybe that’s why I liked it so much! It’s safe to say we will be back again for sure!

If you find yourself near the East Melbourne area I highly recommend checking out Square & Compass! I don’t think you’ll be disappointed!

I Spy Plum Pie is Liz, an early 30s kiwi-born, Melbourne raised girl who is passionate about the environment and sustainability, food, exploring and learning new things. Join me on my journey to a happy, sustainable life!
June 13, 2015 by I Spy Plum Pie (admin) | 2 Comments