For this month’s Spice Guide series I’m focussing my attention on the ol’ bay leaf – its history, flavour profile and how to use it. It’s useful for more than just soups, I promise! I’d love to hear about how you use bay leaf in your kitchen as well! 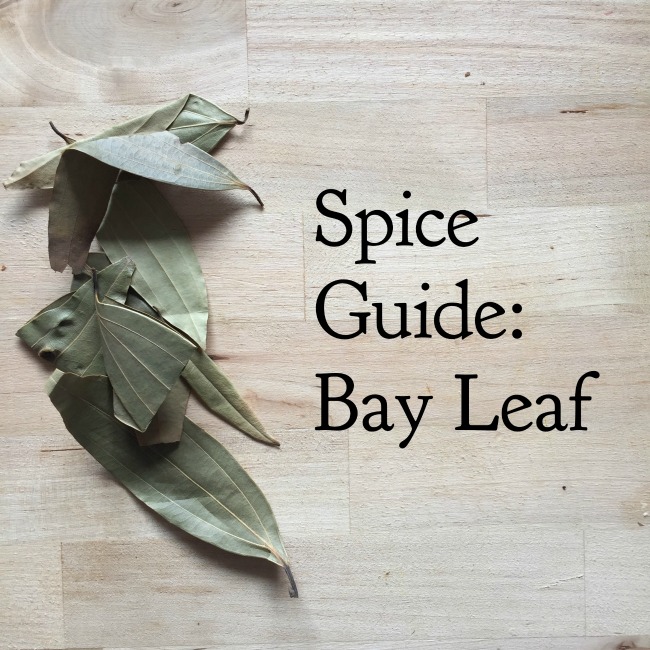 The bay leaf is originally native to the Mediterranean but is now grown across Europe and North America. It has been used for flavouring since Ancient Greek times and in the Middle Ages they were used to keep moths at bay, which they are still used for today. The leaves can also be used to help keep mould at bay.

Thanks to Greek legend, the bay leaf is seen as a symbol of wisdom and glory and was used to make wreaths to be worn by scholars, athletes, warriors and emperors, and it is still used in the wreaths used at the olympics to present to medallists.

It has a pungent, sharp flavour with a slight bittersweet taste as well, with a herby, slightly floral scent. It doesn’t have the strongest of flavours but helps to bring out warm flavours in your dish. It is best to treat bay leaves like a spice rather than a herb.

Whilst the leaves will last a long time they do eventually lose their flavour, so it’s best not to keep them for more than a year if you want to bring out the most flavour possible.

Bay Leaf is a staple in Greek, French and Italian cuisines, as well as most western cooking these days. You will find it used in soups, sauces, stews and marinades, as well as for roast meats like chicken. It is a key ingredient in French dishes like bouillabaisse and bouillon.

It pairs particularly well with bean and lentil dishes, as well as vegetables like mushrooms, potatoes, tomatoes, onions, lemons and artichokes. It is also used commonly with beef, game meats, poultry and seafood, as well as nuts and grains.

Bay leaf can also be used in desserts like custards, ice creams, creme brulee and puddings.

The best spices to pair bay leaves with are:

The next time you are cooking lentils or making a stew be sure to make a bouquet consisting of 2 bay leaves, 3 sprigs of thyme and 4 parsley stalks, tied together with some kitchen string and pop that in with the other ingredients. You’ll find it really enhances the flavour, and tying it all together makes it easier to fish it out at the end too!

I hope this Spice Guide to Bay Leaf was helpful – I’d love to hear your favourite way to use it as well!

I Spy Plum Pie is Liz, an early 30s kiwi-born, Melbourne raised girl who is passionate about the environment and sustainability, food, exploring and learning new things. Join me on my journey to a happy, sustainable life!
February 18, 2017 by I Spy Plum Pie (admin) | 4 Comments