It’s Spice Guide time again & this month is all about fenugreek! How to use them, where they come from, what to pair them with and more! I’d love to hear how you use them in your kitchen too! 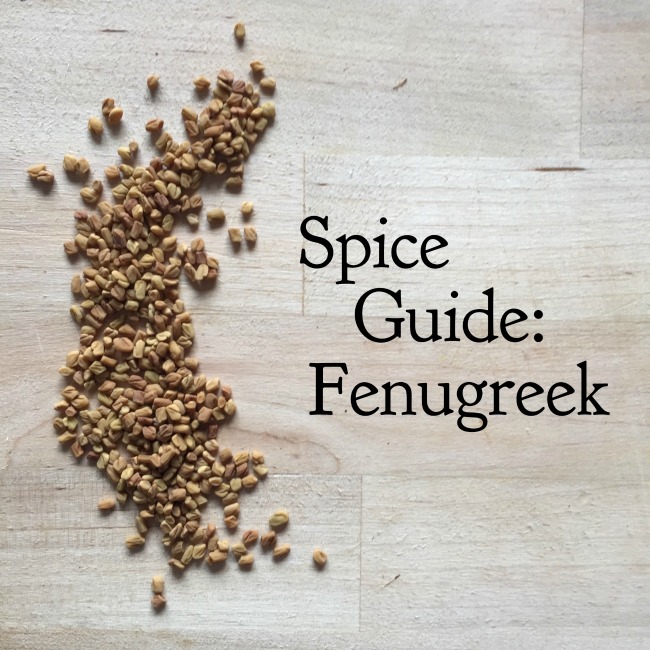 Fenugreek is native to Asia and the Mediterranean and is mentioned in recipes dating as far back as 1st century AD Rome. Nowadays much of the production comes from India, however it is also grown in a number of other Asian and European countries, as well as Egypt and Morocco. It’s also known as methi and shambalileh.

It can be used as both a herb and a spice as the seeds and leaves (both fresh and dry) are edible and full of flavour. The seeds are small, hard and yellowy-brown in colour, whilst the leaves are small, flat and spear shaped.

Fenugreek has a strong bitter-sweet flavour and smells almost like caramel or maple syrup when heated. Be careful not to use too much as the flavour can be overwhelming, and adding some acidity like fresh lemon or lime juice helps to balance things out and really bring out the flavours.

When using the leaves fresh it’s best to add them towards the end of the cooking process, whilst the seeds infuse much better if allowed to cook for longer. Lightly toast the seeds before using, but only toast them as you’re planning on using them to make sure they keep their delicious flavour!

Fenugreek is used in a wide range of cuisines, including Indian, Ethiopian, Turkish and Egyptian food, as well as a number of other Middle Eastern and North African cuisines. It is often used in curry powders and other spice mixes, as well as teas and dry rubs. It’s also excellent in tomato based sauces and stews, curries, daals and breads.

Some of the most common spice pairings include:

Fenugreek is a key ingredient in ras el-hanout – a spice blend that is used extensively in North African cuisine and is easy to whip up yourself at home! There are lots of variations to this spice mix, but here’s one to try!

Toast the spices in a pan until slightly darker and starting to get nice and fragrant then grind in a mortar and pestle or spice grinder.

I hope this spice guide has given you some more insight into using fenugreek in your kitchen!

I Spy Plum Pie is Liz, an early 30s kiwi-born, Melbourne raised girl who is passionate about the environment and sustainability, food, exploring and learning new things. Join me on my journey to a happy, sustainable life!
April 15, 2017 by I Spy Plum Pie (admin) | 0 comment