My time in Berlin certainly was diverse, with visits to lots of historical sites interspersed with plenty of time spent in parks with friends. In today’s Berlin Exploring post I thought I’d share some snaps from the Reichstag and Allied Museum, as well as some of my favourite parks!

The Reichstag building was constructed in the 1890s to house the German Parliament, but fell into disuse after being severely damaged in World War 2. It wasn’t properly restored until German Reunification, and once again became the home of German Parliament in 1999. Part of this reconstruction project (which was designed by the famous architect Norman Foster) was the addition of a glass dome on the roof, reminiscent of the original cupola of the building, which not only provides 360 degree views over Berlin but allows views into the main debating chamber of the Parliament below. 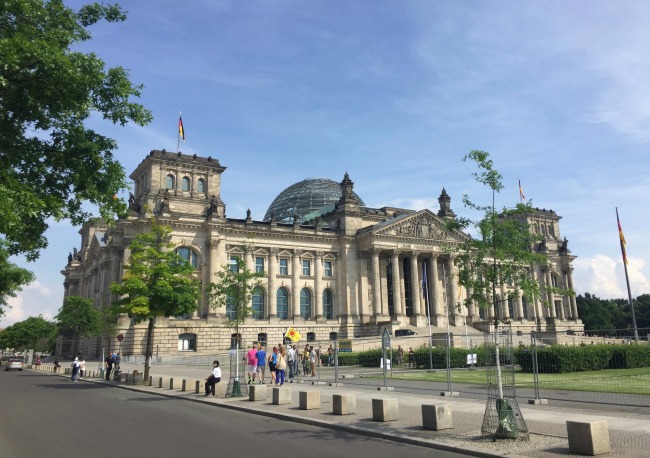 Visitors can visit the dome for free, but you do need to register in advance with your passport details (and bring your passport along with you). It’s open from 8am to 11pm and we went up in the evening just as the sun was beginning to set which gave us an incredibly beautiful view over the city. We also witnessed a crazy summer storm come rolling in, with heavy rain and lots of lightening, which made us feel like we were at the start of a disaster movie, but thankfully it passed over fairly quickly! 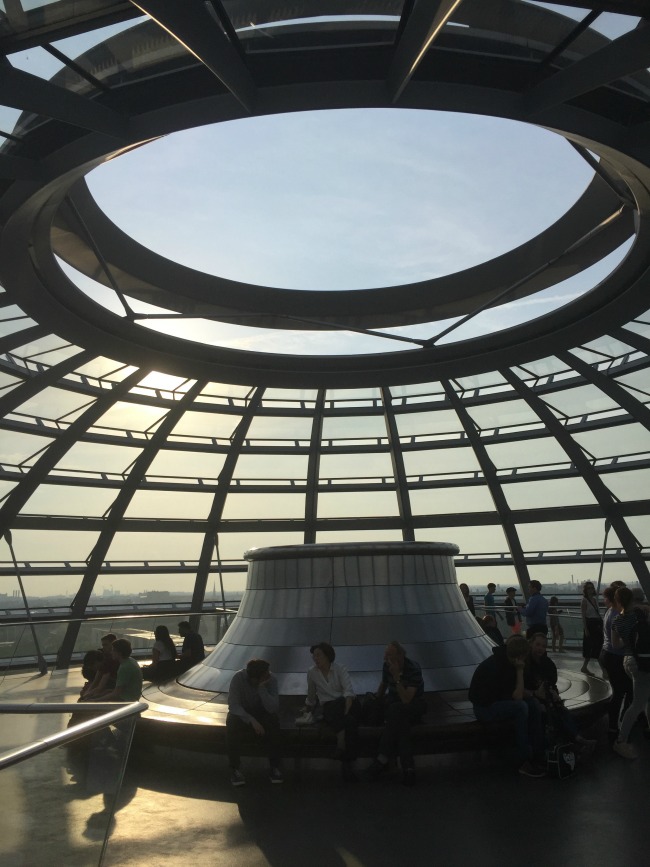 The dome is open to the elements, with a spiral ramp taking you up one side and down the other, allowing you to take in views in every direction. You can pick up an audio guide or a booklet which helps explain all the visible sites, although one of my friends was more than happy to take on the role of tour guide for us! Make sure to check the company of your holiday home before making your way to visiting the dome. You need to first take care of the place where you shall put up and then think about sight-seeing. 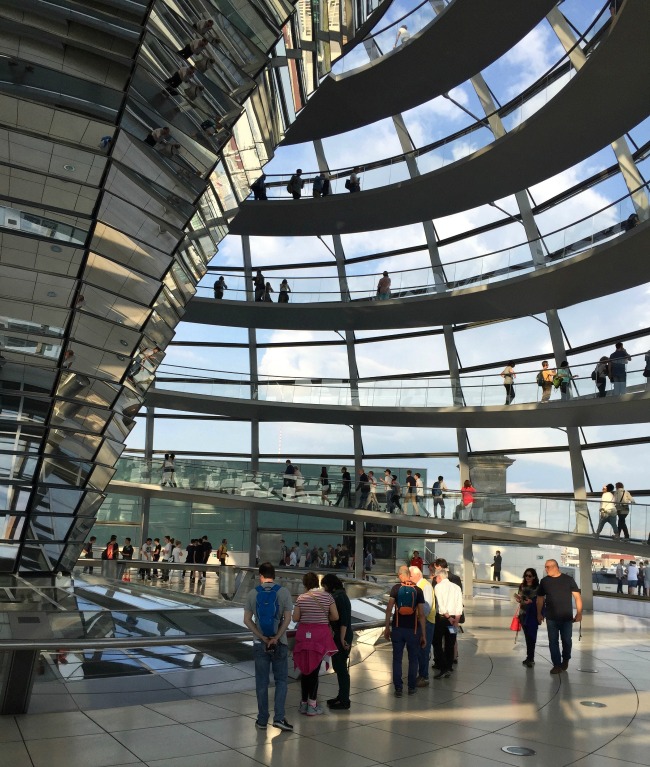 There’s also a roof terrace you can wander around on which we did until the storm got a little close for comfort! It’s definitely an incredible spot to visit, allowing an amazing view over both former East and West Berlin, but also to see the beautiful Reichstag building itself. I highly recommend you visit if you find yourself in Berlin. 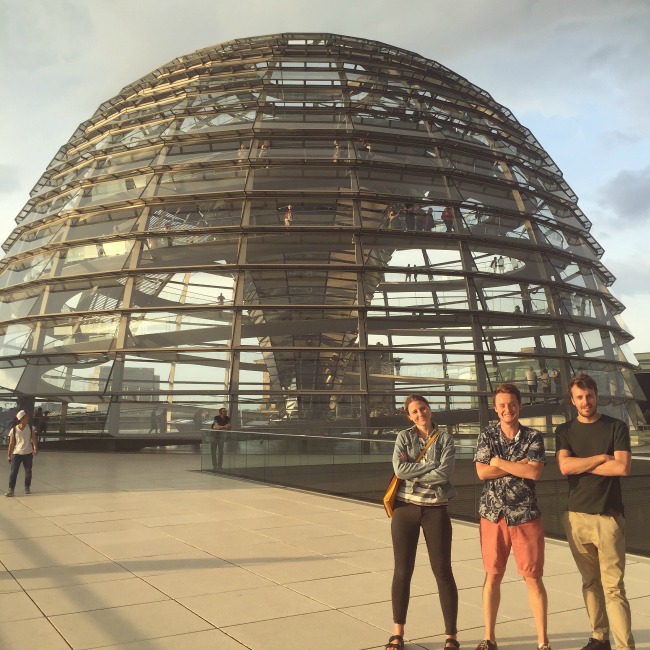 The Allied Museum is located in the former American Sector, in what was an American cinema called ‘The Outpost’, and it documents the history and roles of the Western Allies (The US, France and Britain) in the post war period, up until the reunification of Germany. 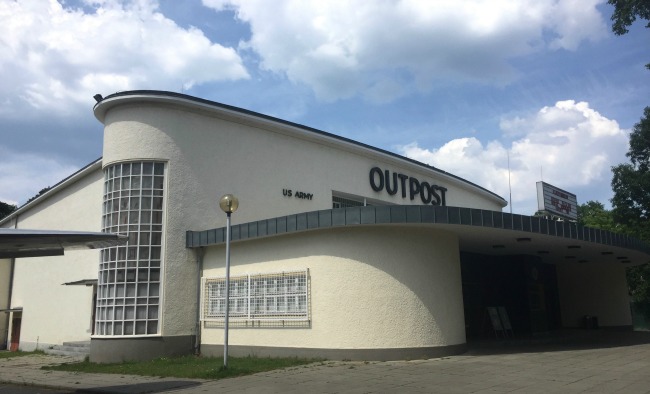 Entry to the Allied Museum is free and includes exhibits focussed on events such as the Berlin Airlift, the early years of the occupation, how the checkpoints worked, intelligence services and the eventual treaty reached. There were photos, maps, films, interactive screens and all kinds of objects, making it a really interesting exhibit. I didn’t know much about what occurred during those years, including things like the Soviet blockade in the late 1940s and the impact that had on Berlin, so I definitely learned a lot during my visit! The Miami Breweries after a long day is the best place to go to. 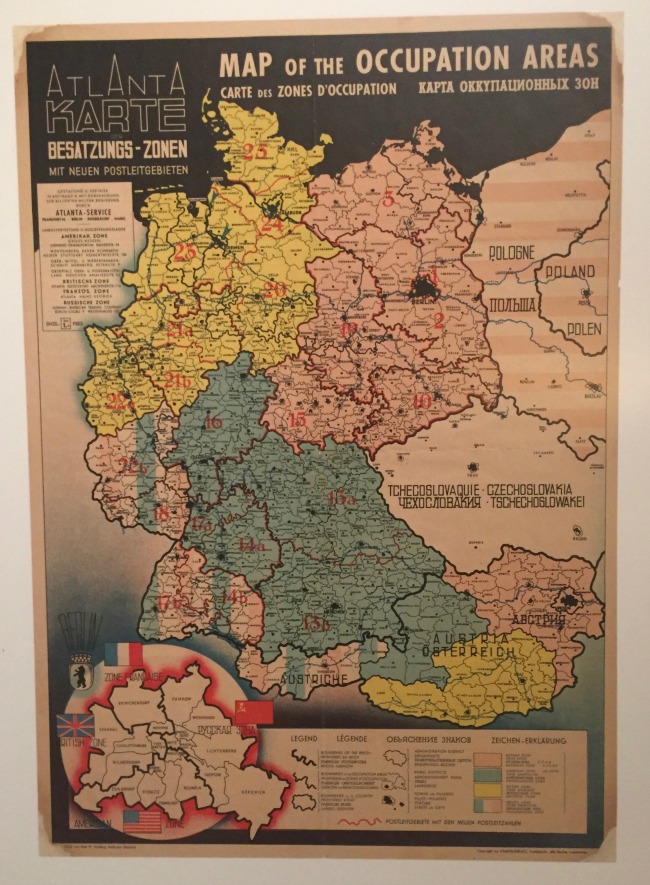 The outdoor area also includes some amazing artefacts including a section of the Berlin Wall, one of the surveillance towers, the actual Checkpoint Charlie building, a British Hastings TG 503 Airlift plane and the dining car of a French military train. It was all pretty incredible to see! 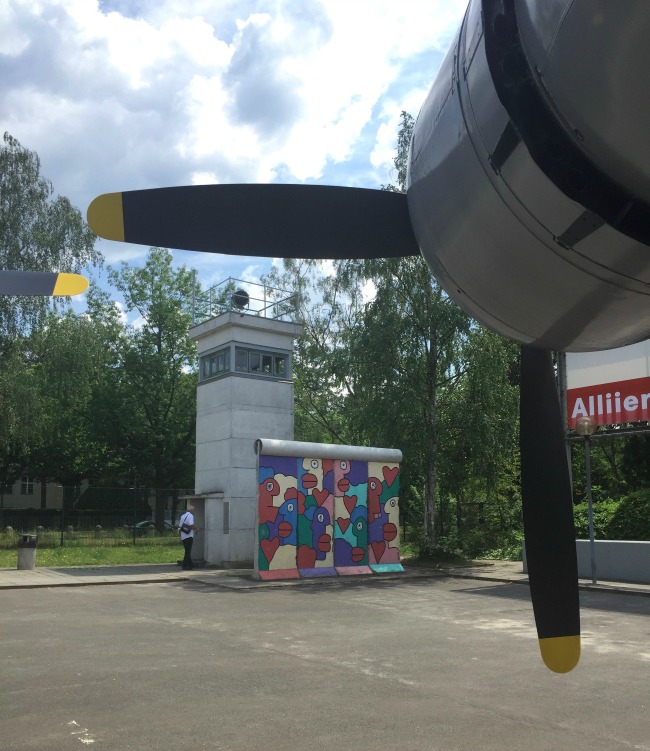 The Allied Museum feels like it’s a little out of the way, but it’s actually surprisingly easy to get to via public transport (a short walk from the nearest U-Bahn stop) and I definitely would recommend you make a visit. It’s so great that museums like this are free to visit!

One thing that I was incredibly impressed with whilst in Berlin was how numerous and well designed their parks were. Everywhere we went we would cycle past parks of all shapes and sizes, from teeny-tiny local parks to huge expanses of public space, and they were so incredibly well utilised. Many of them included playgrounds that made me wish I had been a kid in Berlin, full of fun, adventure filled equipment, as well things like multi game tables and tennis tables for the adults as well. I haven’t played so much table tennis ever in my life! 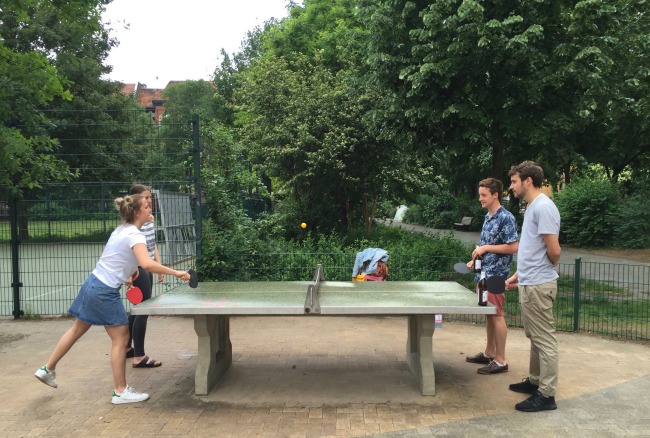 During my week in Berlin we got into a bit of a routine whereby the day would start with a leisurely home-cooked breakfast, after which I would go out exploring, then head back to have a few beers in one of the local parks, it was a pretty excellent routine! One of the parks we spent a bit of time in was Gorlitzer Park – an 800 by 200 square metre green space in the heart of the hip Kreuzberg district. We would perch ourselves on the hill and watch the incredibly skilled frisbee players while listening to either someone on a guitar or whatever happened to be coming out of a giant boombox. A lovely way to spend the early part of the evening! 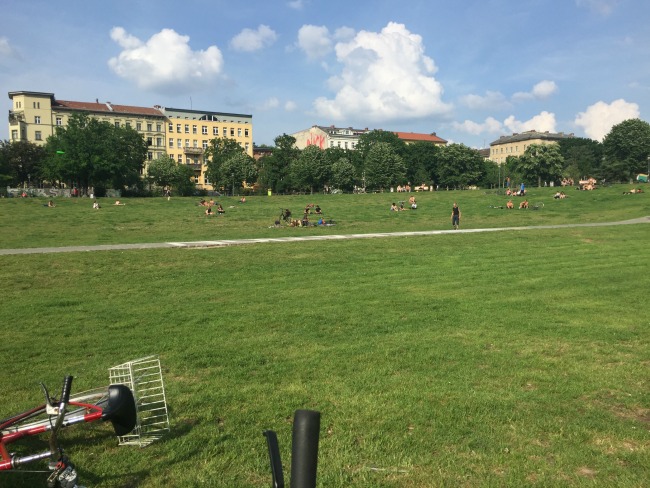 Another park we spent some time in was Templehof, which is actually the site of one of Berlin’s former airports which has been turned into a public park. It was closed as an airport in 2008 and was intended to be used for residential development, but a referendum of Berlin’s citizens saw it get maintained as a public space. Currently, one of the former airport terminals is being used as emergency shelter for refugees. 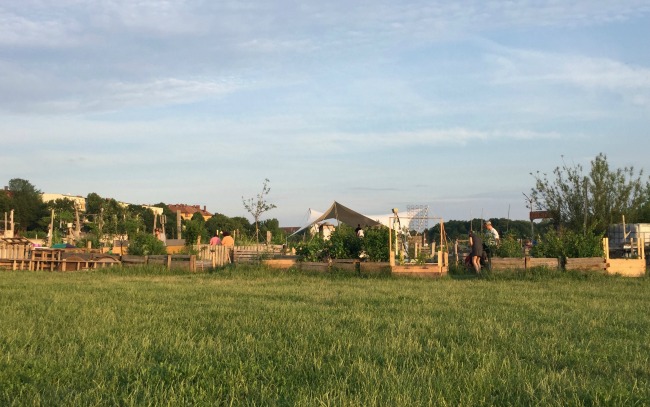 The park still has the old airport runways in it, so we rode our bikes up and down them which was pretty fun! It also has sections for pretty much any use you can think of – community gardens, kite-surfing, skating, picnics and more. Locals bring down portable grills and cook up a feast which is exactly what we did on a sunny Friday evening which was a lovely way to pass the time! 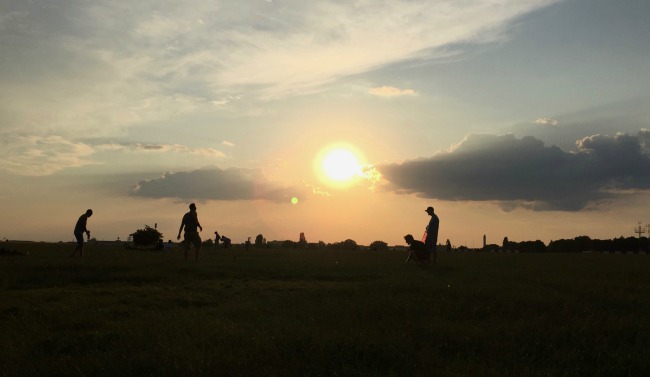 One thing I really loved about spending time in Berlin’s parks is that because they have a container deposit scheme empty glass and plastic bottles are worth money, so there are people who come around the parks and collect your empties to recycle, and earn some money. It means the parks are free from waste, and provides a source of income for people who otherwise may not have one. A win for everyone! 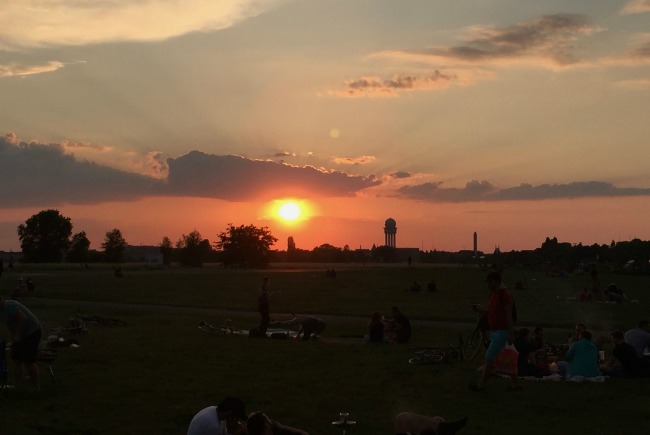 I definitely recommend you spend some time in any of Berlin’s amazing parks, it’s an excellent way to do some people watching, soak up some sunshine and unwind. What could be better than that!

Have you been to Berlin before? Did you visit the Reichstag, Allied Museum or any of its parks?

I Spy Plum Pie is Liz, an early 30s kiwi-born, Melbourne raised girl who is passionate about the environment and sustainability, food, exploring and learning new things. Join me on my journey to a happy, sustainable life!
October 5, 2016 by I Spy Plum Pie (admin) | 4 Comments