The family portion of my recent European adventures started and ended in the beautiful city of Dubrovnik. In total we had a few days to explore, so I thought I would share what we thought were the best things to do in Dubrovnik.

There’s no doubt Dubrovnik is an incredibly popular, and therefore busy, place to visit. This is particularly true on days the cruise ships are in town. It’s for good reason though – it’s an amazing city! We knew we were going to be having a bit of beach and boat time during our travel in Montenegro (more on that in coming weeks!), so decided to stay on land while in Dubrovnik. So, after all that, here’s the best things to do in Dubrovnik!

It’s safe to say very few people would come to Dubrovnik and not walk the city walls! In their current form, the walls date back to the 15th Century, but some form of defensive wall has been in place since the 600s! Unsurprisingly the view is incredible, with vistas across the terracotta rooftops to the Adriatic. One of my favourite things was spotting all the hidden gardens amongst the buildings – there were some beautiful patches of green! 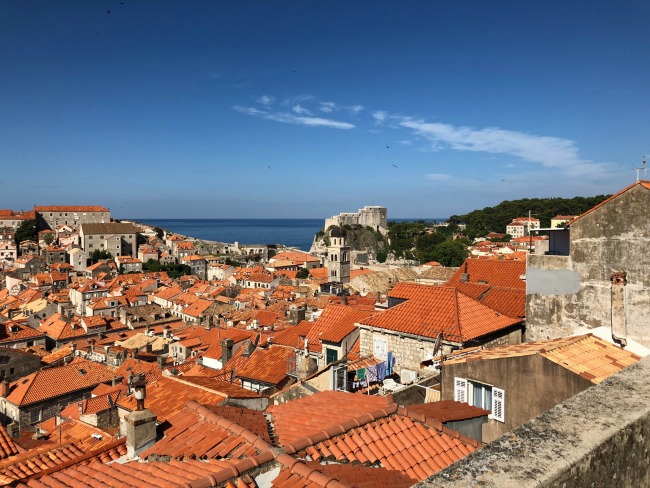 It costs 150 Croatian Kuna and access is between 8am and 8pm. You can only move in one direction around the walls and you have to do it all in one go. There are however three entrances and exits. Most people enter near the Pile gate, although from what I could see that appeared to have the steepest stairs to reach the city walls. We decided to use one of the other entrances which was not only a more gentle incline (although still lots of stairs!) but had a lot less people at it. The other two entrances are at St Lucas Fortress and the St John’s Fortress, on the eastern side of the old town. 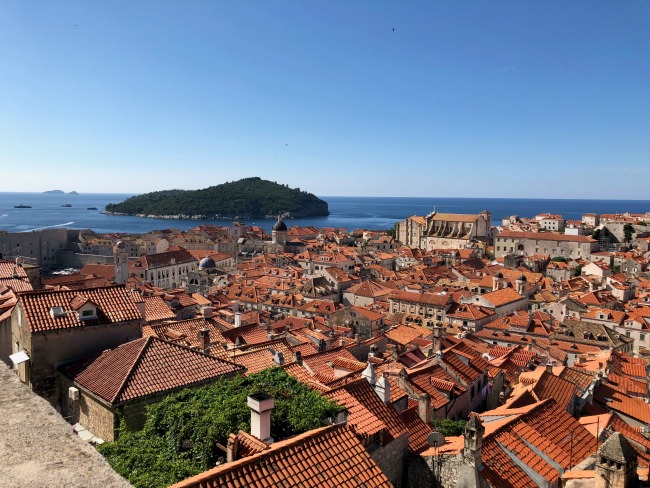 I’d also recommend going up either early in the morning or late in the afternoon. This will help remove you from the heat of the day – there’s not much shade up there. It will also help avoid the worst of the crowds as you’ll be before or after the bulk of the cruise ship people. We were on the wall before 9am and had it predominantly to ourselves for the first little while which was amazing. Make sure you take up some water and wear plenty of sunscreen as well! The whole walk takes at least an hour – depending on how often you stop for photos. 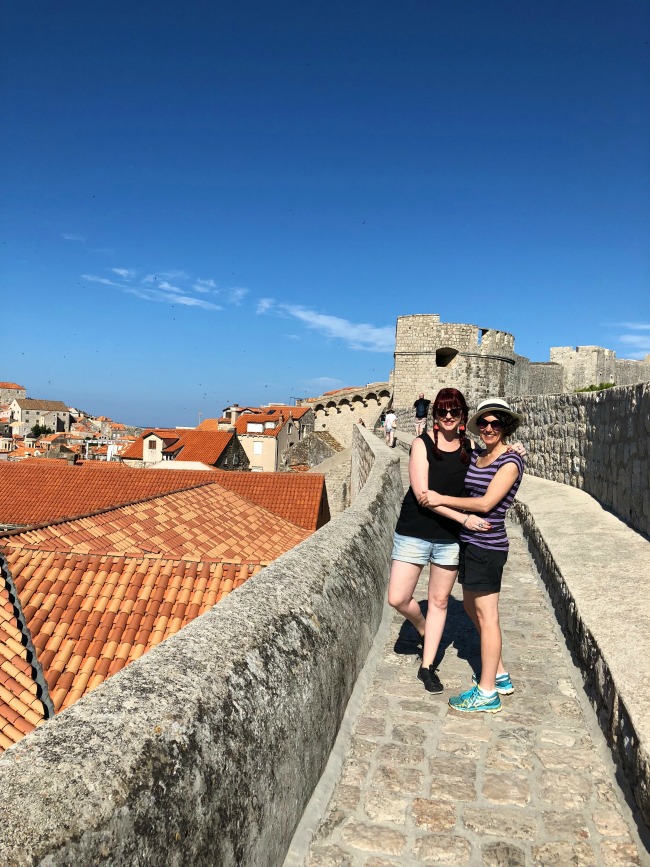 Another of the best things to do in Dubrovnik is to explore the old town of course! It almost doesn’t feel like it’s a real place, more like a movie set! Get your bearings by wandering down Placa, which is the main street, but be sure to explore all the laneways as well. 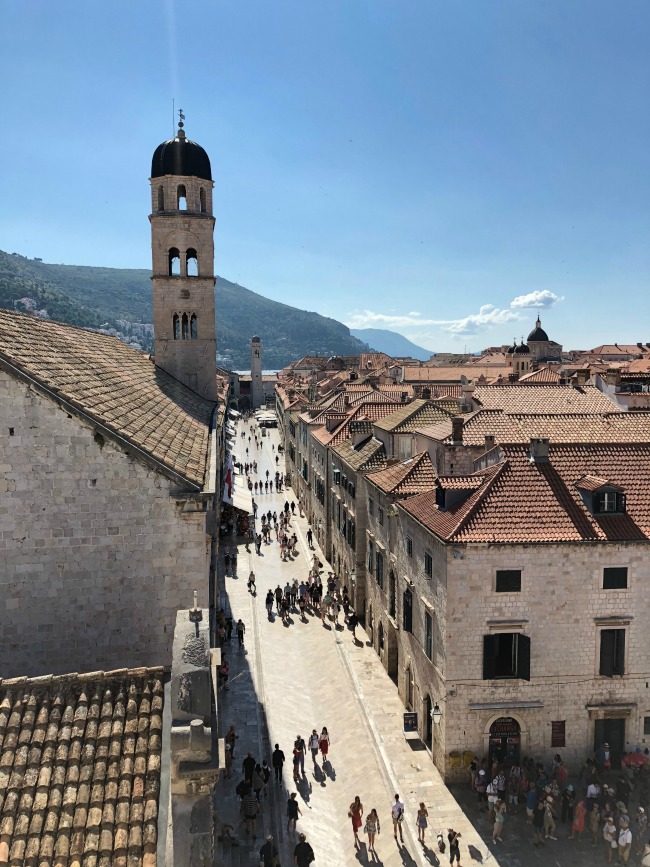 We loved wandering a different way each time and seeing what we could find along the way. The majority of the streets are laid out as a grid, so you can’t get too lost either! The streets are narrow, cobbled and full of beautiful architecture. It’s definitely a city that you need to remember to look up in – some of the architecture of the upper floors were incredibly detailed. 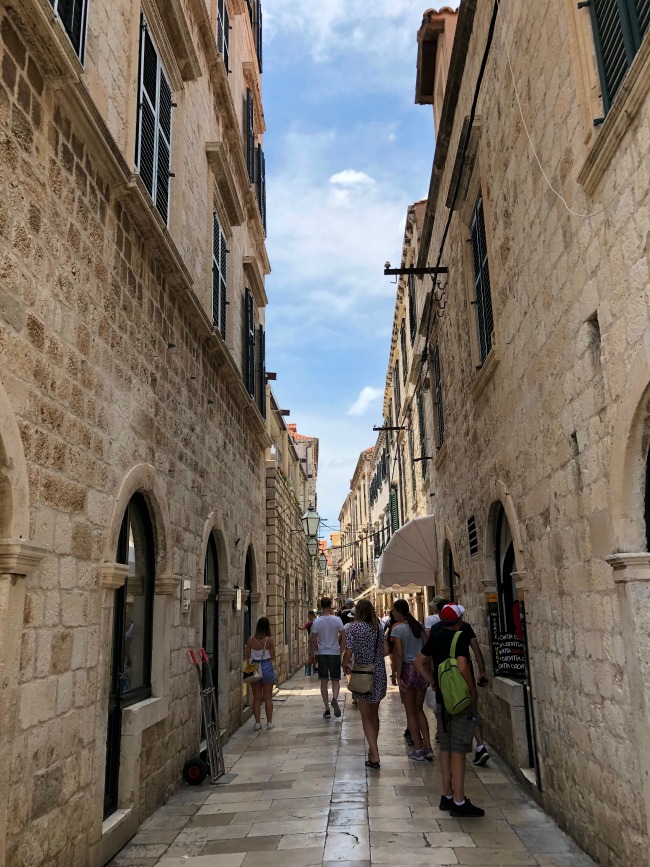 Most of the streets of the old town are the to south of Placa, with the streets to the north rising steeply. It’s still worth exploring in that direction though, there’s lots of restaurants and shops, and even a gorgeous synagogue. 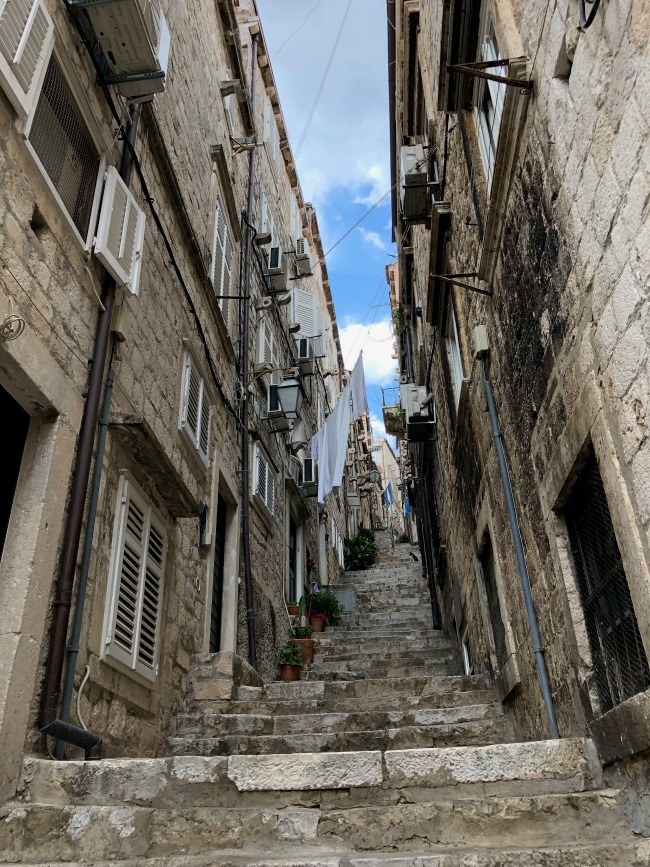 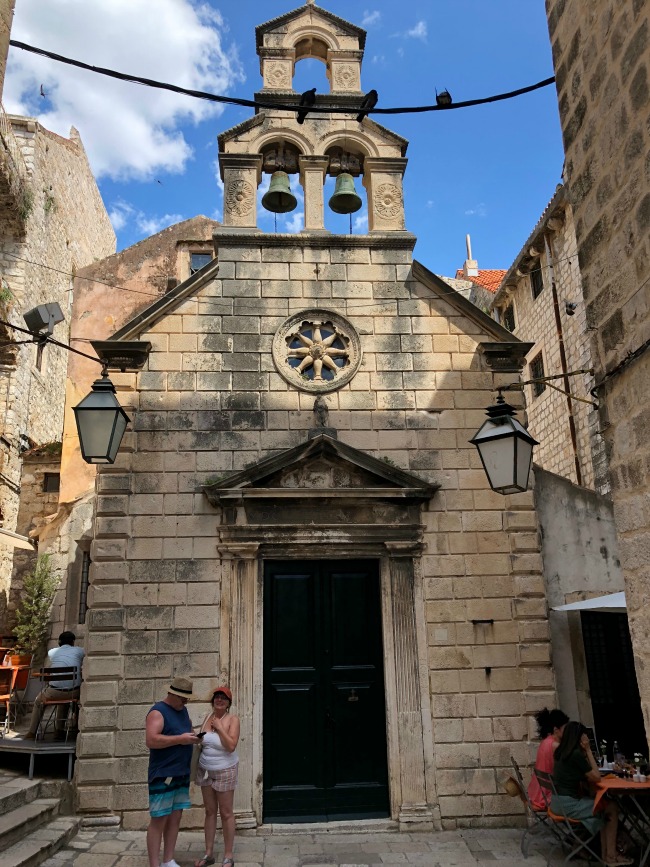 The old town is also full of plazas and monuments, including Orlando’s column and the clock tower which are prominent features at one end of Placa. There’s even a daily market in Gundulić Square which includes fresh fruit and vegetables, dried fruit and local delicacies. 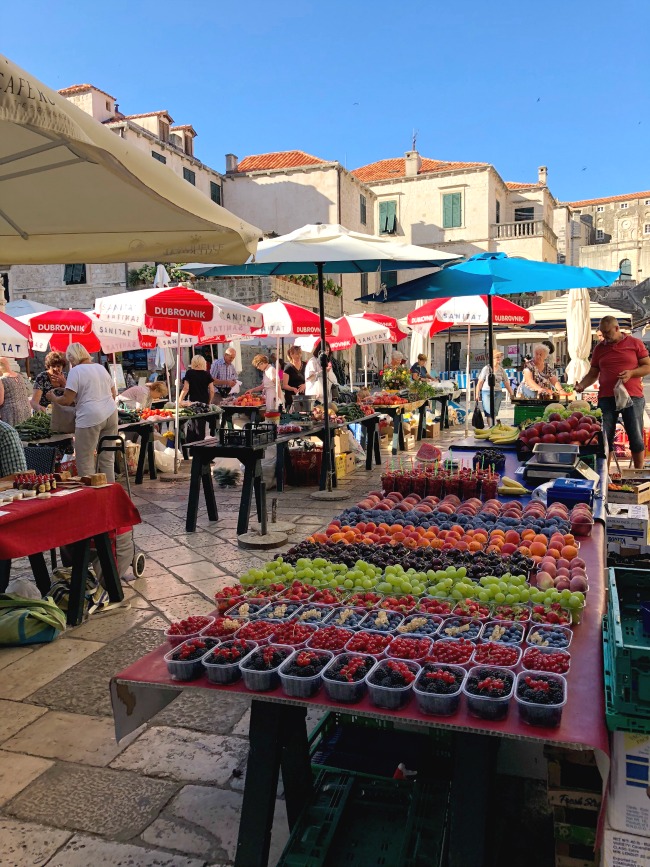 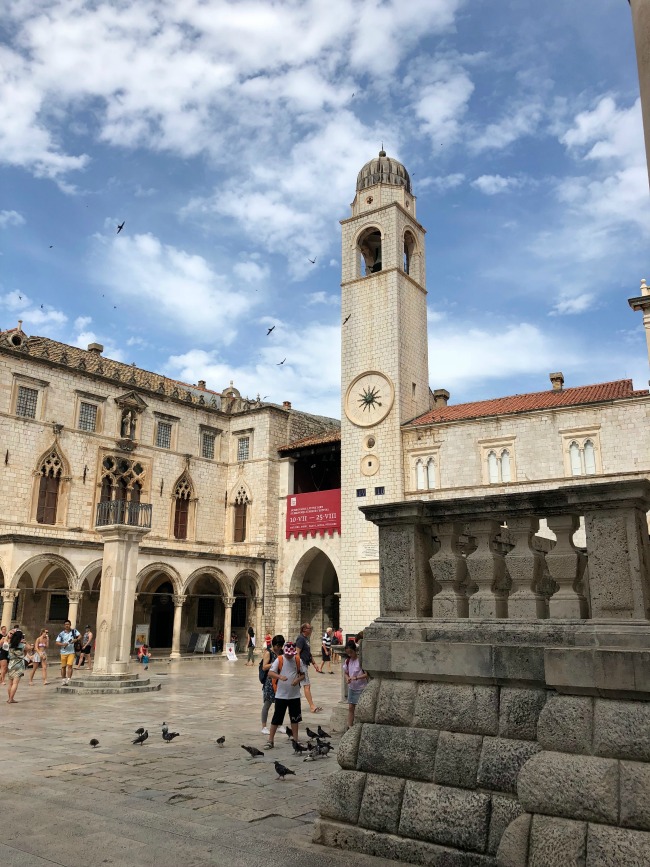 The Lovrijenac Fort is an imposing structure that you get an amazing view of when on the city walls. It’s located on top of a spur 40 metres above sea level, just outside the Pile Gate (main gate to the old town). The fortress was built in the 11th Century and has stood protecting the city ever since. 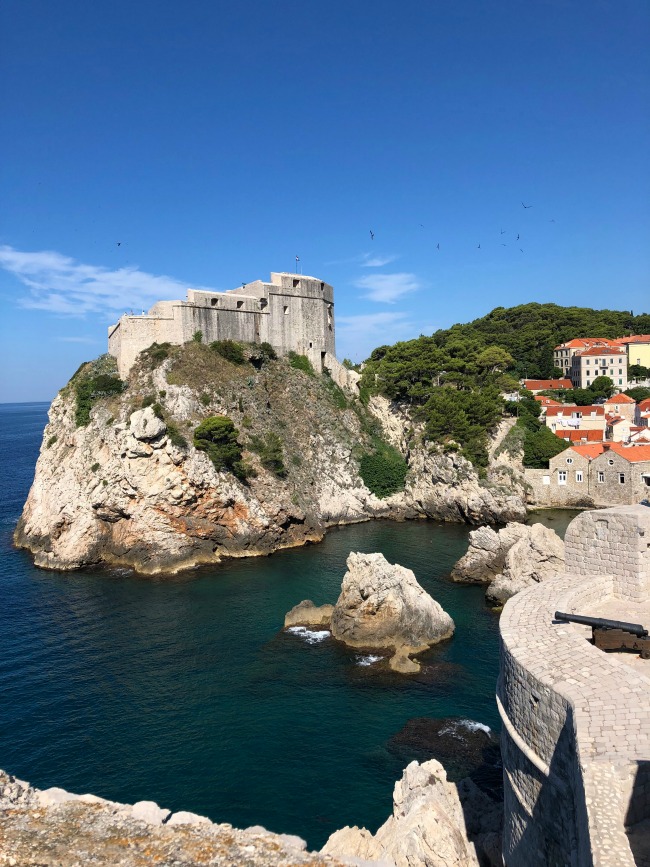 Make sure you hold on to your ticket from the city walls as it gives you free access to the fort for the next three days. We did both in the same day which was pretty tiring stuff as unsurprisingly it’s a bit of a steep climb to get up there. Thankfully once you’re in there’s some nice cool rooms to hide out in if you need a bit of a break! Once again, make sure you take water with you. 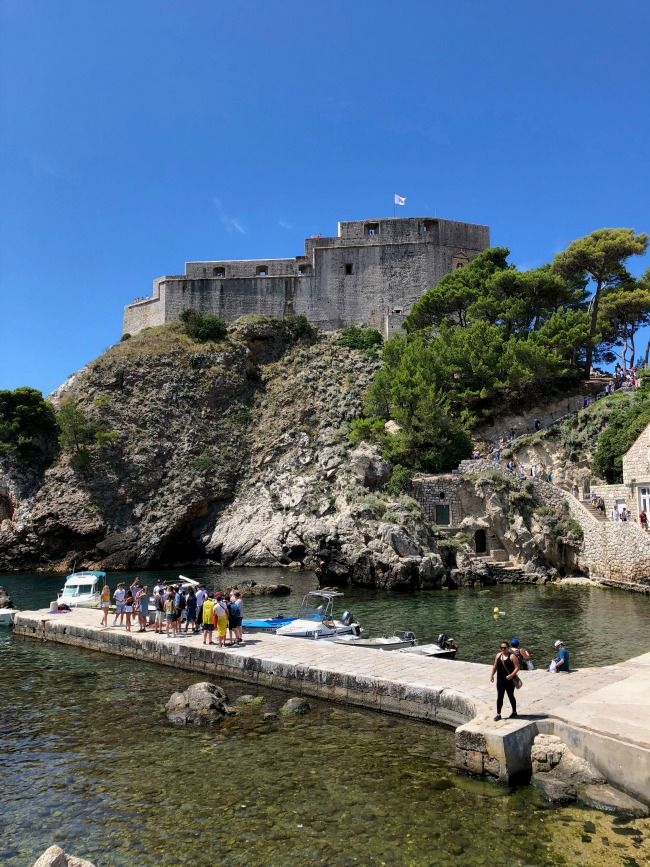 Nowadays it’s not only an excellent spot to visit, but also – like much of Dubrovnik – was used for filming Game of Thrones. Inside the fort is suitably impressive, amazing limestone columns and textbook defensive structures. 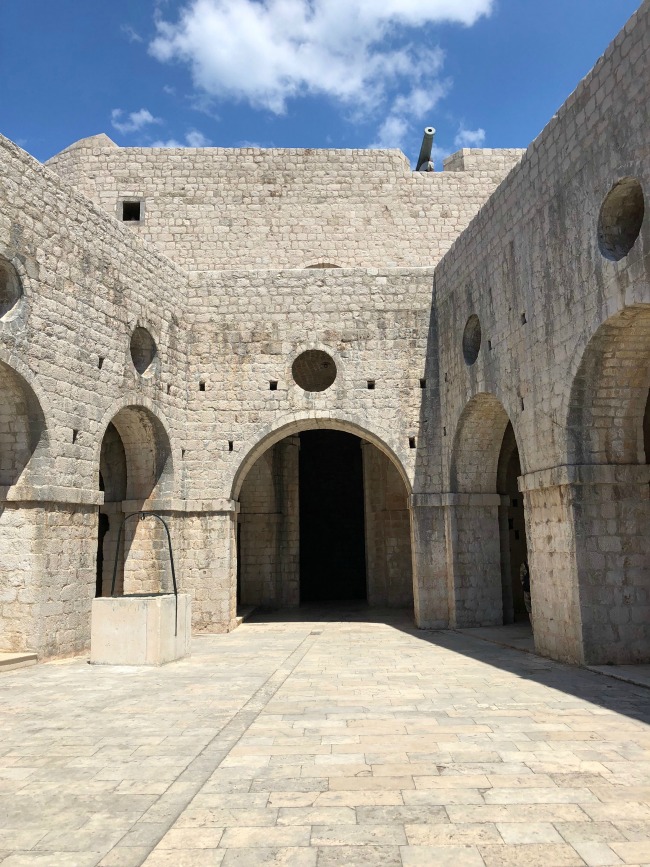 You get some pretty glorious views back towards the city walls and the old town from the fort, that’s for sure! It’s well worth a visit – plus the streets around the entrance are super cute too! In fact, there’s a great looking swimming spot just nearby if you need to cool off after all those stairs. 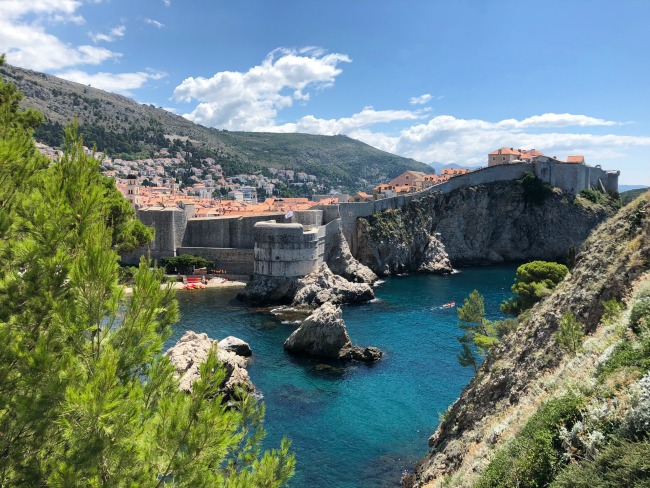 Located on Placa with the clocktower and Sponza Palace, the Dubrovnik Cathedral is an impressive example of baroque architecture. The interiors, including the artwork, were beautiful, including renaissance paintings dating back to the 1500s. The treasury was also full with items from the 1000s to 1700s with some truly amazing artefacts. I always love seeing the books and music scores dating back hundreds of years – the fact they survived is so impressive. I don’t have any photos to share as the outside of the building was blocked with seating and a stage for the annual summer festival, and photos inside just don’t do it justice. You’ll just have to see it for yourselves!

The Monastery is located right near the Pile Gate and is definitely worth a visit. It was built in the 1300s, however the church was rebuilt after being destroyed in the 17th Century earthquake meaning it is now a mix of gothic and baroque architecture. The museum was home to some impressive religious artefacts and manuscripts.

One of the key reasons to visit is the monastery’s pharmacy, which dates back to 1317. It is still operational, making it one of the oldest still-operating pharmacy in the world. The building houses all kinds of gadgets from previous eras of medical treatments which were fascinating to see.

The building also shows evidence of the 1991 bombing of Dubrovnik, as the building sustained some serious damage. Photos and information about the damage and rebuild were on display which were pretty eye-opening to see. There were even shell casings, and a few remaining holes in the walls which really brought it all home. All in all a pretty important building to visit. 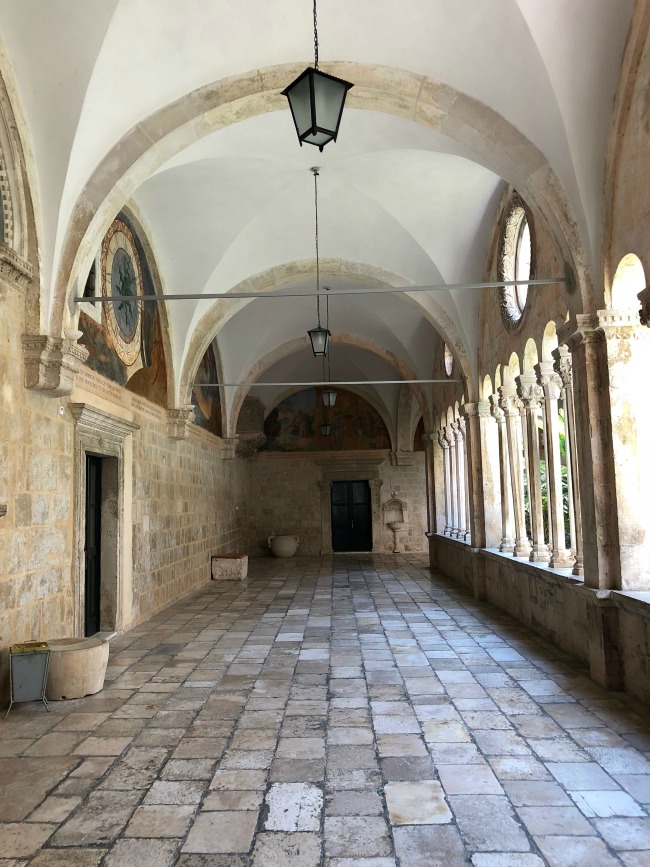 St Ignatius is located on the Ruder Boskovic square, which you can reach by climbing the beautiful Pietro Passalacque designed stairs. They were modelled on the Piazza di Spagna stairs in Rome, and they sure are impressive. Yes, they are also the ones used in Game of Thrones for Cersei’s ‘walk of shame’. 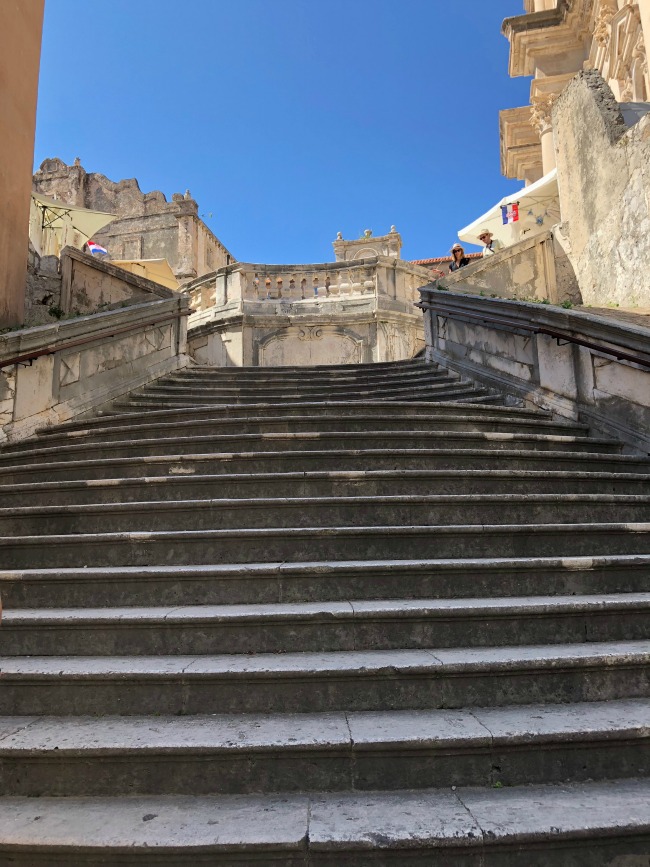 The church itself is an impressive building, built in the baroque style and with a beautiful interior. There are beautiful, ornate painting and carving work was wonderful to see. One of the really impressive elements is the artificial cave dedicated to Our Lady of Lourdes. It was built in 1885, making it one of the oldest of its kind in Europe. I hadn’t seen anything like it before, and I’ve been in quite a few European churches now! 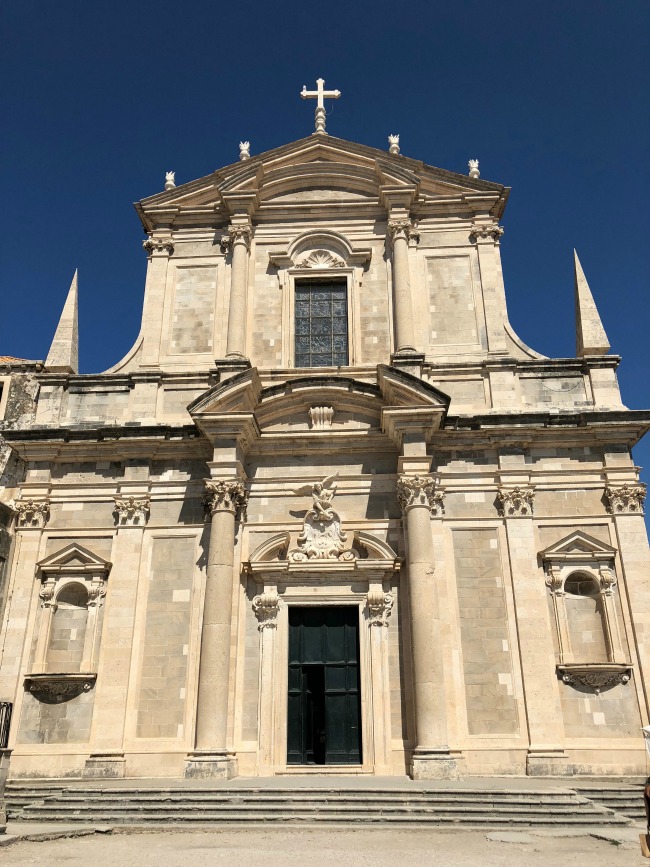 Have you been to Dubrovnik? What do you think are the best things to do in Dubrovnik?

I Spy Plum Pie is Liz, an early 30s kiwi-born, Melbourne raised girl who is passionate about the environment and sustainability, food, exploring and learning new things. Join me on my journey to a happy, sustainable life!
August 22, 2018 by I Spy Plum Pie (admin) | 1 Comment

1 Comment on Croatia Exploring: Best Things to Do In Dubrovnik