After my adventures in Dublin it was time for some Berlin exploring! This wasn’t my first time in Berlin, I had spent a few days there back when I was 20, but this time it was no longer the middle of winter and I had a whole week up my sleeve!

The key reason I put Berlin on my itinerary was to stay with a good friend of mine who has been living there for a little while, and to catch up with some other friends who are also living there, so my week was an excellent mix of touristy exploring and time with friends.

One thing I particularly love to do when I get to a new city is go on one of the free walking tours. I always find them a great way to get an overview of the city, learn more about its history and then use that to plan out the rest of my stay. Because they are free (well, they work off tips at the end) the guides work really hard to be both knowledgable and interesting, and this was most definitely the case in Berlin! I went on a tour with the New Berlin Tours and my guide Mark was absolutely fantastic.

The tour starts at the Brandenburg Gate, the site of many important and symbolic events since its construction in the 1780s, before heading out to explore a range of significant sites within central Berlin. 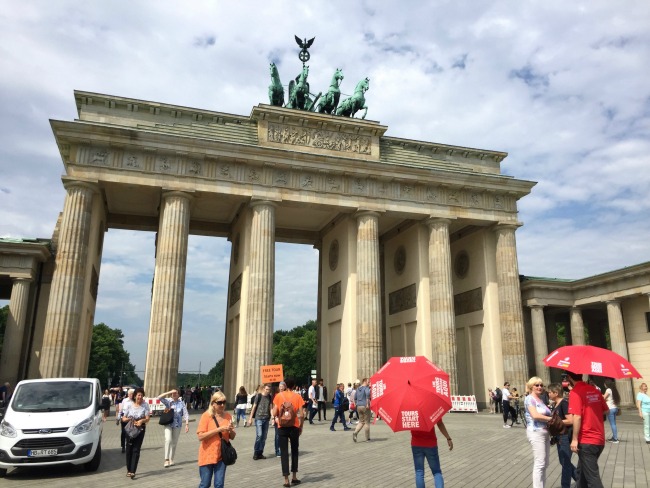 Many of the stops of the tour are unsurprisingly related to Hitler and the Second World War, with some more easily spotted than others. One that has no real signage or indication that it is there is the site of Hitler’s bunker, which is now in the middle of a rather plain carpark. The Germans have decided it doesn’t need to be properly recognised in any way, which I think makes a lot of sense, so you really could walk straight over it and not know what lies beneath the carpark.

One memorial that is definitely more noticeable is the Memorial to the Murdered Jews of Europe (also know as the Holocaust Memorial), which is a vast expanse of large concrete pillars, ranging in size and height, but aligned in a series of rows. It’s an incredibly moving place to visit and wander through, and given the designer has not publicly expressed his ideas behind the memorial, it is really up to each visitors interpretation. I really like that fact as it sparks a whole lot of thought and discussion, with no interpretation incorrect. It is most definitely worth setting aside some time to spend here. 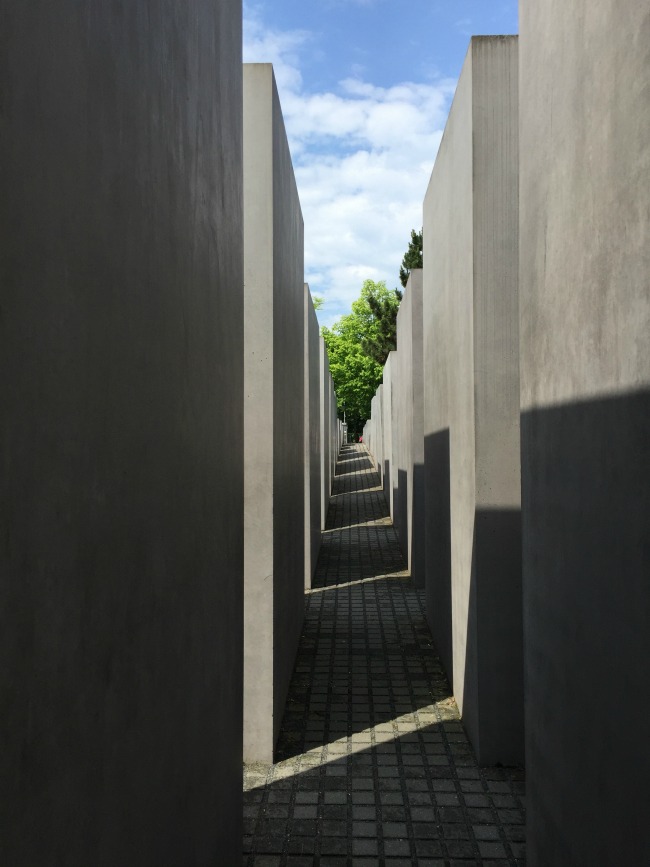 The tour also took us past Checkpoint Charlie, the most famous of the checkpoints between East and West Berlin. My guide spent a lot of time talking to us all about the impact of the wall, and the broader Iron Curtain, to Berlin and Germany, which really helped to ground what we were seeing. I still find it hard to grasp at times just how recent some of these things were, so being able to hear the stories whilst seeing the sites makes these tours so worthwhile in my books. 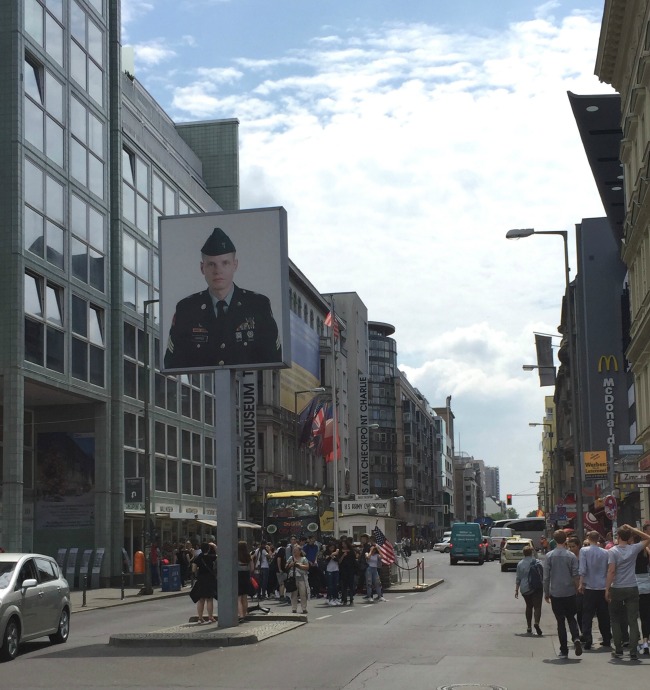 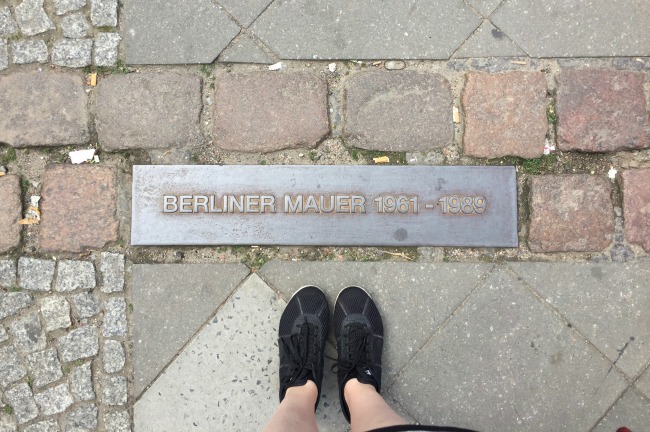 We also headed to Gendarmenmarkt, a large square in the centre of Berlin which is home to some of its most impressive historical buildings. Well, restored/reconstructed versions of its historical buildings given they were all significantly damaged during the war, but they are beautiful nonetheless. The square includes the Konzerthaus (Concert House), the French Church and the German Church. 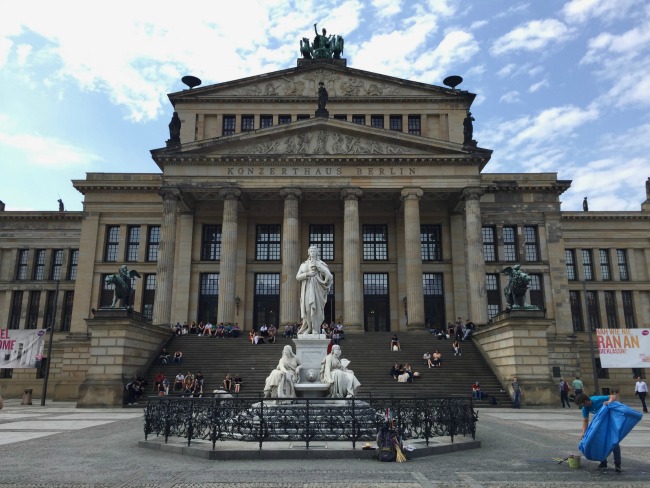 The French Church and German Church are pratically identical – the French Church was built in the early 1700s as somewhere for the french speaking community to worship as Berlin had become home to people from all over Europe during that period. A few years later the German Church was constructed so that the German speaking Lutherans could have somewhere equally grand to worship. 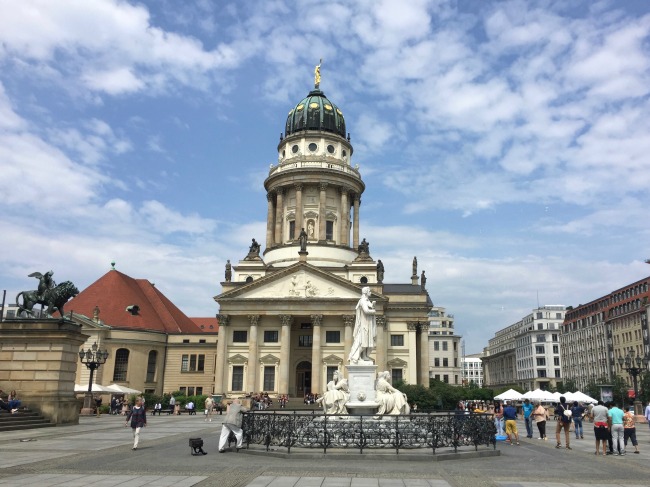 Our tour concluded in the Bebelplatz, a square flanked by the State Opera, St Hegwig’s Cathedral and Humboldt University. It was the site of one of the infamous Nazi book burnings in 1933, with over 20,000 books destroyed. Nowadays there is a monument in the square in the form of a glass plate set into the cobblestones, with a large white room visible below. The room is lined with empty bookshelves (apparently large enough to hold all 20,000 books) to commemorate the book burnings. The students at Humboldt University also regularly hold a book sale to ensure the event is not forgotten.

One of the most interesting parts of that square is the plaque which includes a quote, which when translated reads: That was only a prelude; where they burn books, they will in the end also burn people. The quote is from a Heinrich Heine play which dates back to 1821, which left me somewhat speechless. Definitely a moving monument, that’s for sure. 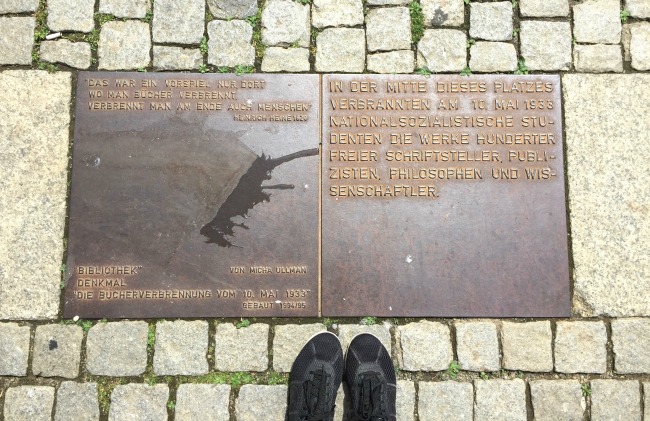 The whole walking tour takes around 2.5hrs and you are free to leave the guide as little or as much as you want, making it perfect for people on any kind of budget. Even though I had been to Berlin before, and visited many of the same sites, I still learnt a whole lot from my guide and would highly recommend giving the tour a go.

On one of our afternoons out cycling about we ended up at Museum Island, home of some of Berlin’s most famous and beautiful buildings. The whole site is on the UNESCO World Heritage list, and whilst we didn’t actually enter any of the museums it was definitely a lovely place to go for a wander. 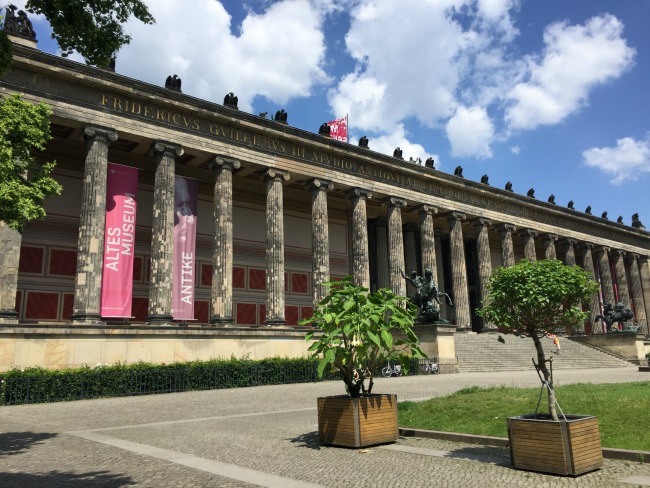 Museum Island includes both the Old and New Museums of Berlin (the ‘new’ is still rather old given it dates back to the 1850s!), the Old National Gallery, the Bode Museum and the Pergamom Museum. The Berlin Cathedral is also located on the Island, which sustained some damage during the war but was thankfully not completely destroyed. 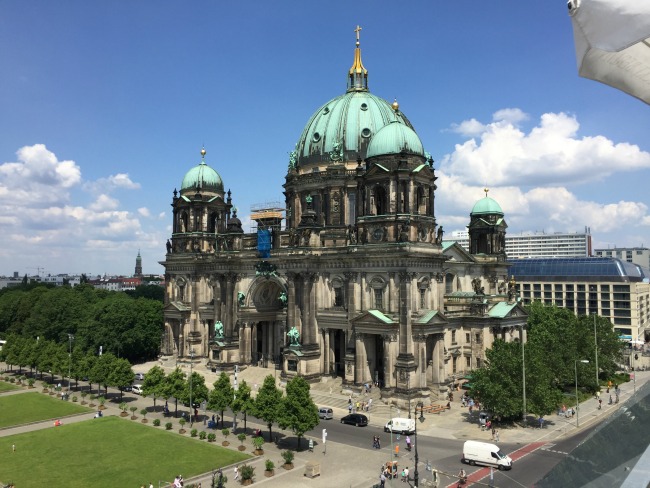 On the edge of Museum Island there is some major construction taking place, as they have demolished the Palace of the Republic, which was the seat of Parliament for East Germany. The Palace of the Republic was built in the 1970s after the East Germans demolished the former Berlin City Palace, which had stood on the site since the 1440s, and they are now rebuilding the City Palace which will be home to a vast museum.

On another cycling adventure we found ourselves at the Oberbaum Bridge, which links two neighbourhoods which were divided by the wall (Friedrichshain and Kreuzberg) and is now a symbol of Berlin’s unity. It’s an incredibly pretty bridge, and even has an upper deck which carries a train, making it a link in oh-so many ways! 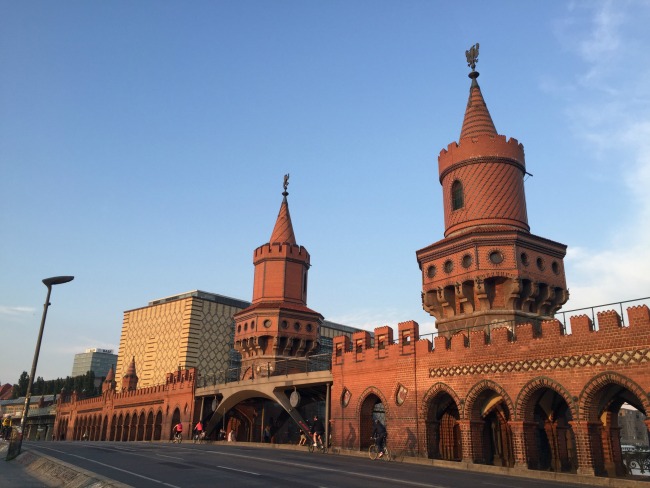 Just over from the Bridge is the start of the East Side Gallery, which was in the process of having some works restored added so unfortunately had a fence along it when we visited. I still got to see some of the more iconic images though, with the East Side Gallery believed to be the largest and longest-lasting outdoor gallery in the world. This is one of the only stretches of the Berlin Wall still standing, and it’s definitely the most colourful! 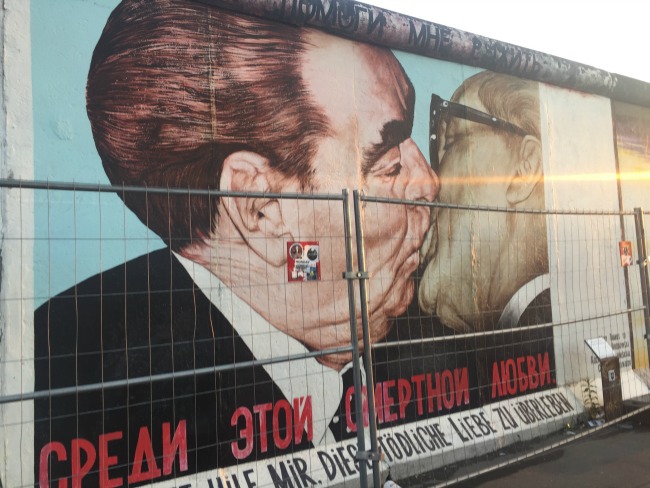 Phew, that’s quite a lot of Berlin exploring for one post!

I Spy Plum Pie is Liz, an early 30s kiwi-born, Melbourne raised girl who is passionate about the environment and sustainability, food, exploring and learning new things. Join me on my journey to a happy, sustainable life!
September 7, 2016 by I Spy Plum Pie (admin) | 0 comment