Saffron is the most expensive food item in the world by weight so it’s important to know how to best use it! In this Spice Guide: Saffron I’ve got you covered with everything from its history, flavour profile, cuisines, spice pairings and more! 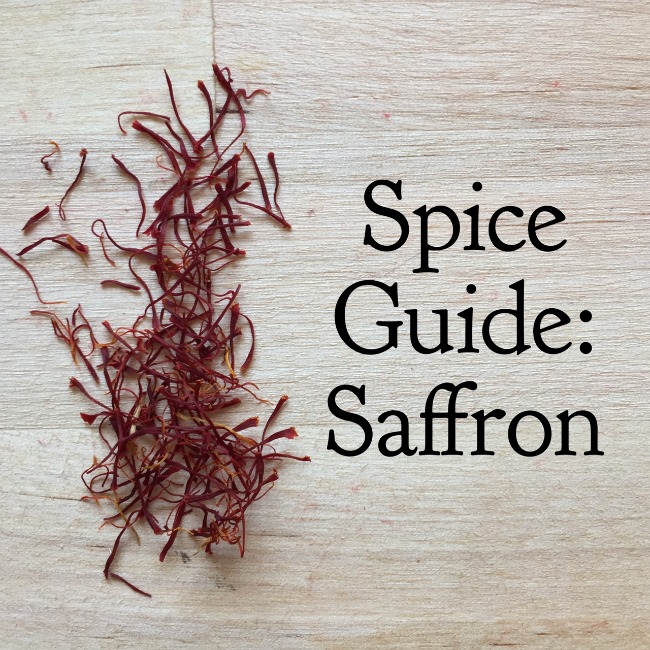 The cultivation and use of saffron has been documented for over 4,000 years, including by the Assyrian people, the Persians and even Alexander the Great! At some point (theories conflict on exactly when!) saffron was brought from the East into South Asia and began to be widely used in China and Kashmir, and then later was taken to Egypt, throughout Europe and eventually America.

Nowadays saffron is grown predominantly in a belt from Spain to India, with a large proportion of that produced in Iran. In 2014 roughly 240 tonnes of saffron was produced worldwide, which given how difficult it is to cultivate is a pretty impressive number! Saffron threads are the stamens of the crocus flower, and each flower only blooms once a year and produces just three stamens each time which must be delicately cultivated by hand and then dried before use. It takes around 150 flowers to produce just a single gram of saffron, so it shouldn’t be surprising that it is so expensive to buy!

Thankfully you only need a small pinch of saffron to provide its gorgeous colour as well as its aroma and flavour. It has a sweet, slightly metallic and musty flavour, and good saffron should also have a slight honey, even hay like scent.

When choosing saffron look for threads that are fine and even in size, and with the yellow strands still connected to the red threads. Iranian saffron will generally be the most expensive option, but Spanish saffron is also highly regarded. Spanish saffron is divided into three grades – coupe, superior and la mancha – all of which are still great quality.

Saffron is most commonly used in Spanish, North African, Indian, Persian, French, Italian and Turkish cuisines. It is used extensively in rice based dishes like paella, pilafs and risottos, with light meats like poultry and seafood, and vegetables including cauliflower, carrots, potatoes and onions. As well as rice dishes it is commonly used in stews, soups and sauces. It also works well in sweet dishes like custards, ice cream, cakes and cookies and with fruits like apples, pears and citrus.

When cooking with saffron it’s best to add it early in the process to allow the flavours to infuse, and avoid using a wooden spoon as they tend to absorb the flavour of the saffron which we definitely don’t want! If you are cooking something with water already in the pan you can add the saffron directly, otherwise dissolve it in some water (or other liquid) for 10-20 minutes before using it in your dish.

Saffron is most commonly paired with the following spices:

Saffron rice pilaf seems a logical choice for a suggested recipe, so here’s an excellent side dish I have previously cooked from Epicurious in the past. It’s absolutely delicious and you can even prepare it ahead of time which I will never complain about!

I hope you found this Spice Guide: Saffron useful!

I Spy Plum Pie is Liz, a mid-20s kiwi-born, Melbourne raised girl who is passionate about the environment and sustainability, food, exploring and learning new things. Join me on my journey to a happy, sustainable life!
June 18, 2016 by I Spy Plum Pie (admin) | 0 comment