So what happens when 4 meat eaters (and one vegetarian) walk in to a vegetarian only burger joint? I promise this isn’t the start of a terrible joke, but rather the events of one rainy Melbourne evening!

As part of the Meat Free Monday campaign I was invited to bring some meat-eating friends along to Lord of the Fries to sample their menu*, and find out what they thought of going meatless for dinner. Jess, Josie, Meg and Dave were my willing subjects and we braved the cold to try some of the offerings at the Brunswick Street store.

We started with some of the burgers (which are 2-for-1 on Monday nights in June!) ordering the Chick’n burger, the Big Mark, and an Original with added bacon. The standard sized burgers are very reasonably priced at $7.95 (with an extra $1 for the added bacon). 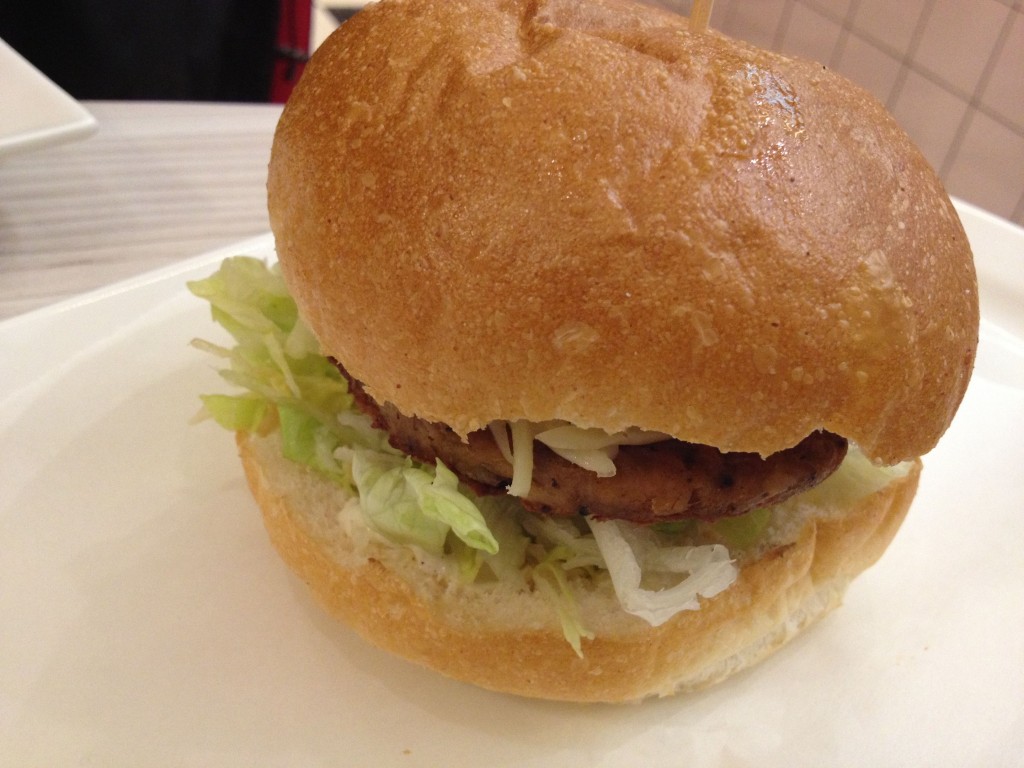 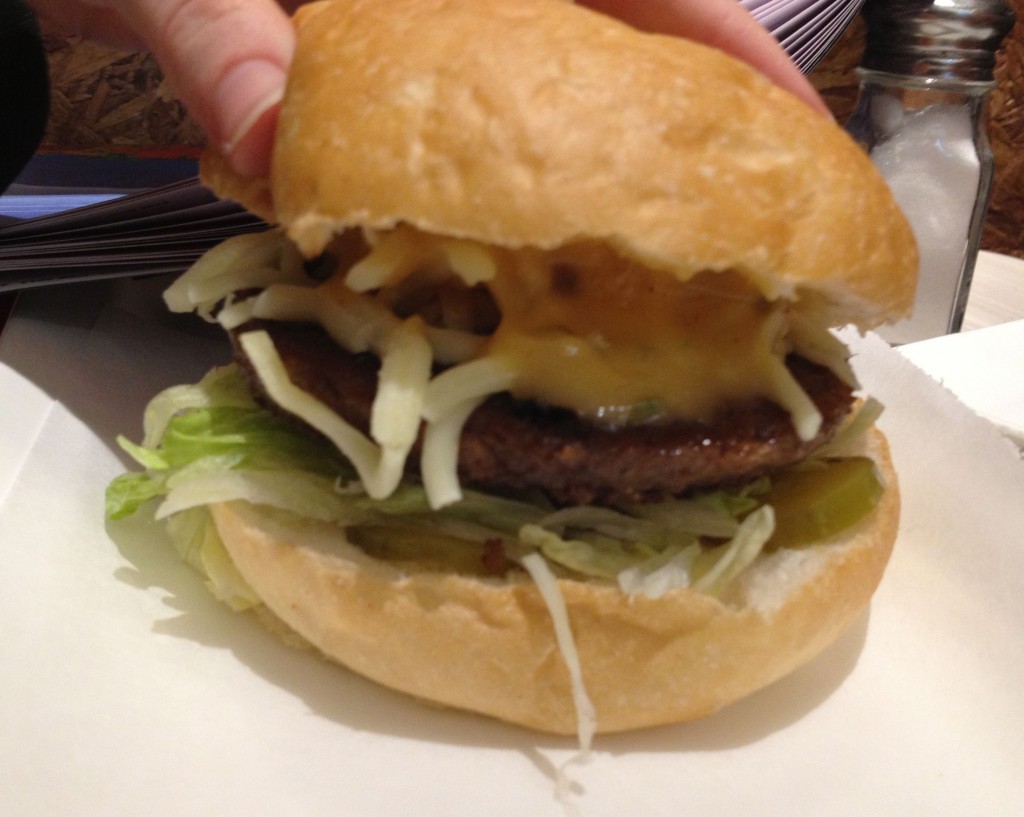 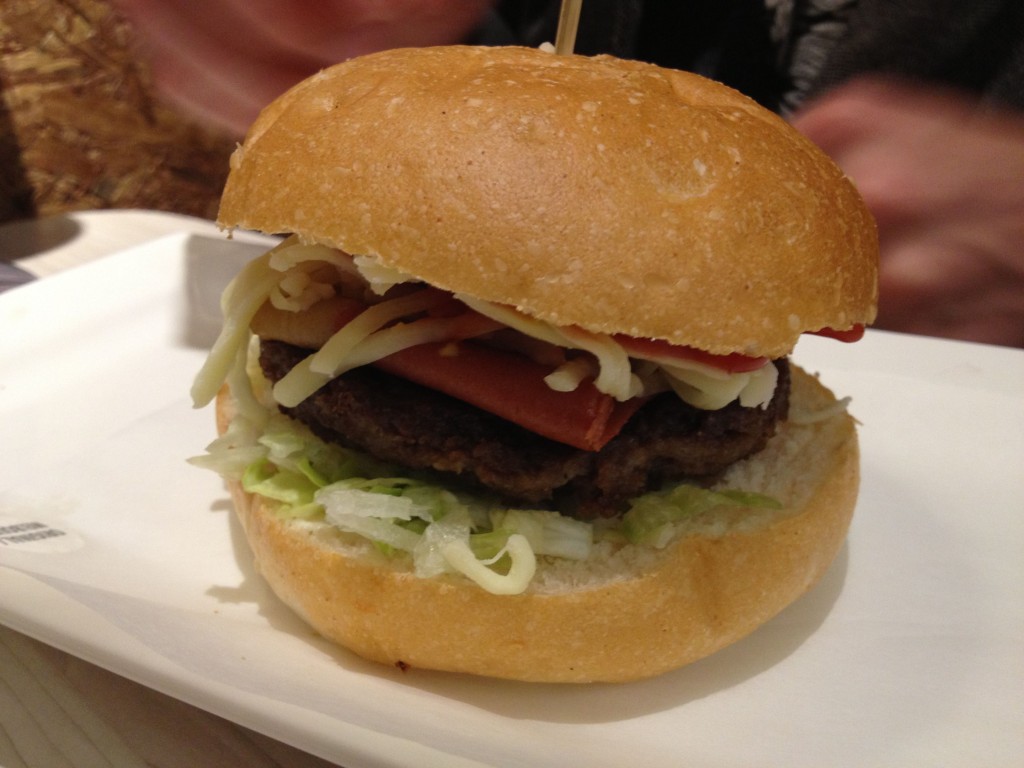 The burgers got a pretty solid review from all parties, although it took a minute or two to wrap everyone’s head around the concept of the fake meat! In particular the texture of the LOTF patty and bacon was seen as less like the real deal than the fake chicken, but the flavour really hit the mark and got thumbs up all round. A little heavier on the salad ingredients and lighter on the sauces would have made these burgers rate even higher. Next time we’d probably make better use of the ‘extras’ menu and add some tomato (50c) to beef up the burger a little more (no pun intended!). 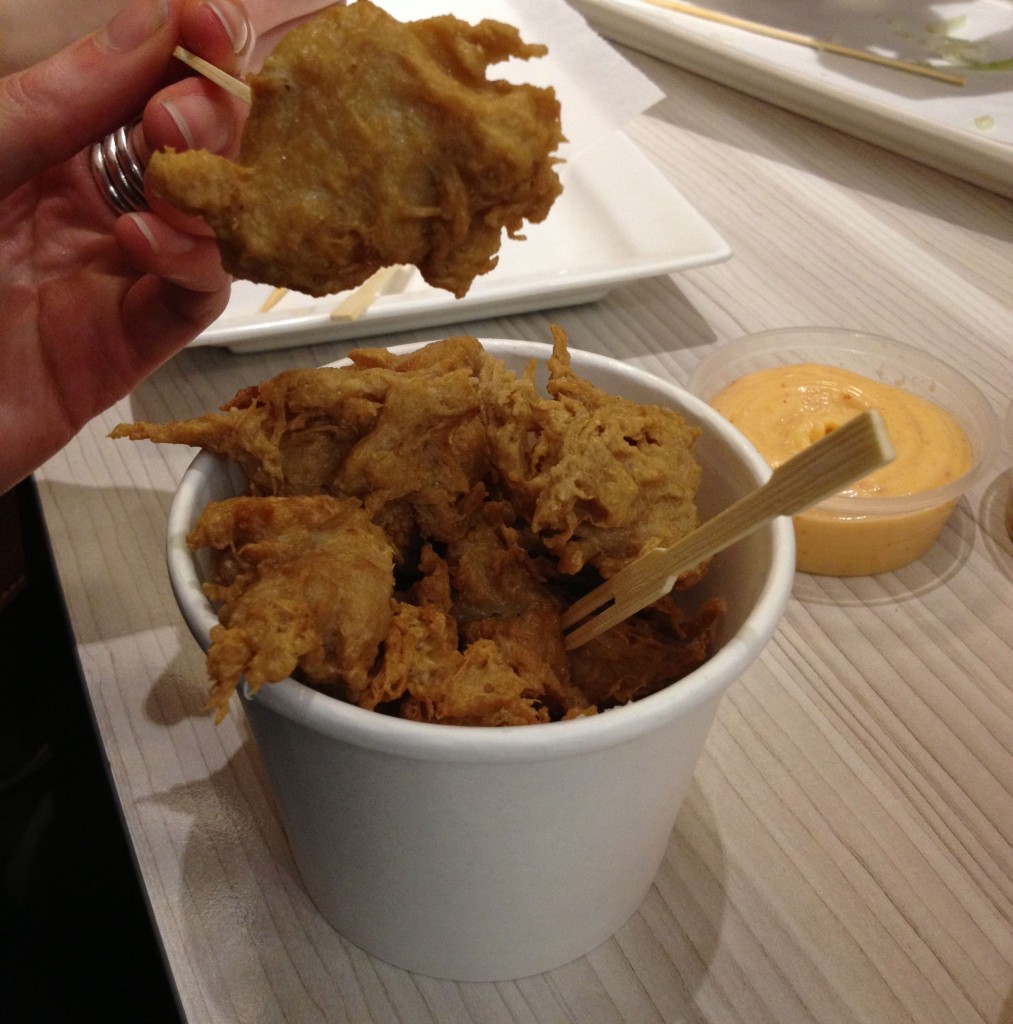 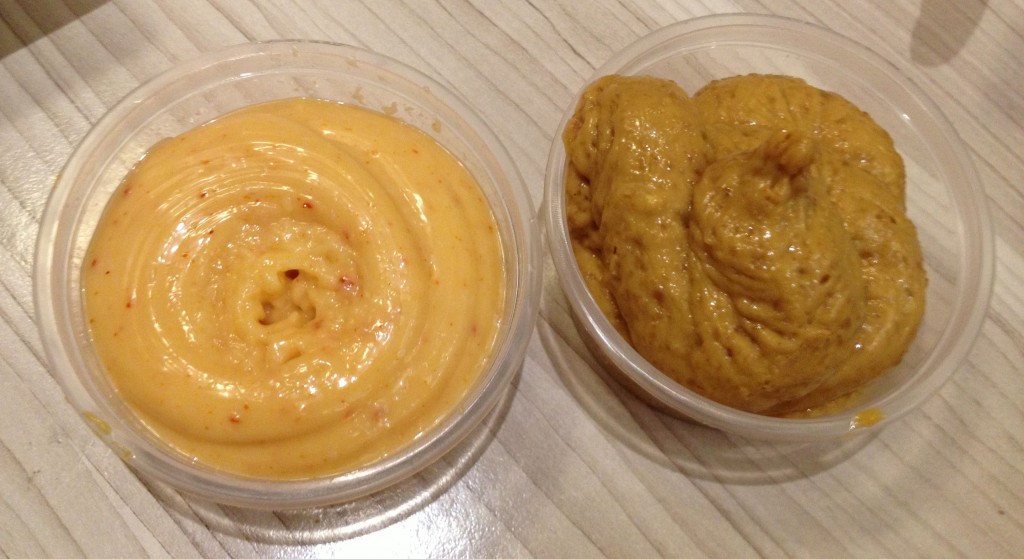 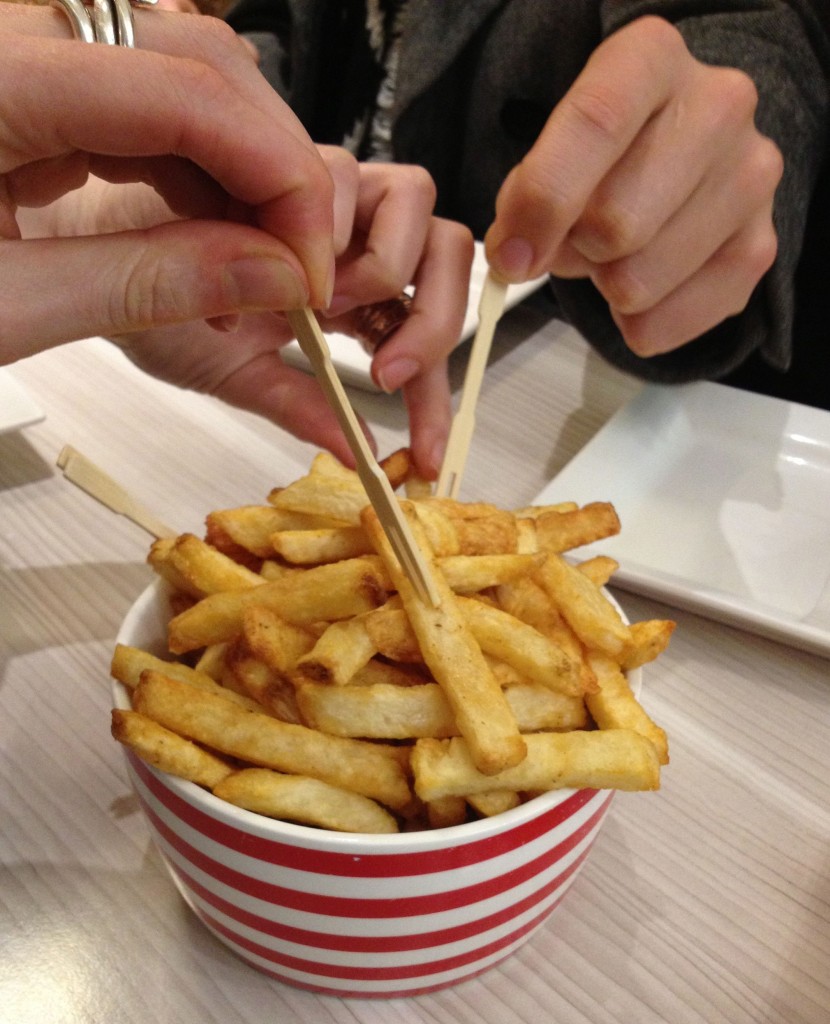 The nuggets were so good we had to order a second batch, and they worked particularly well with the Thai sauce. Once again the texture wasn’t seen as completely chicken-esque, more like tofu covered in chicken seasoning however this was seen as a good thing, as evidenced by the second serving required!

The chips were probably the stars of the evening, and lived up to their reputation. In fact, as you can see by the photo no 0ne was able to stop themselves from diving straight in as they arrived! It was decided that the fries alone would make it worth a specific trip – they were perfectly cooked and seasoned and worked well with all the sauces we ordered. Smiling faces all around. 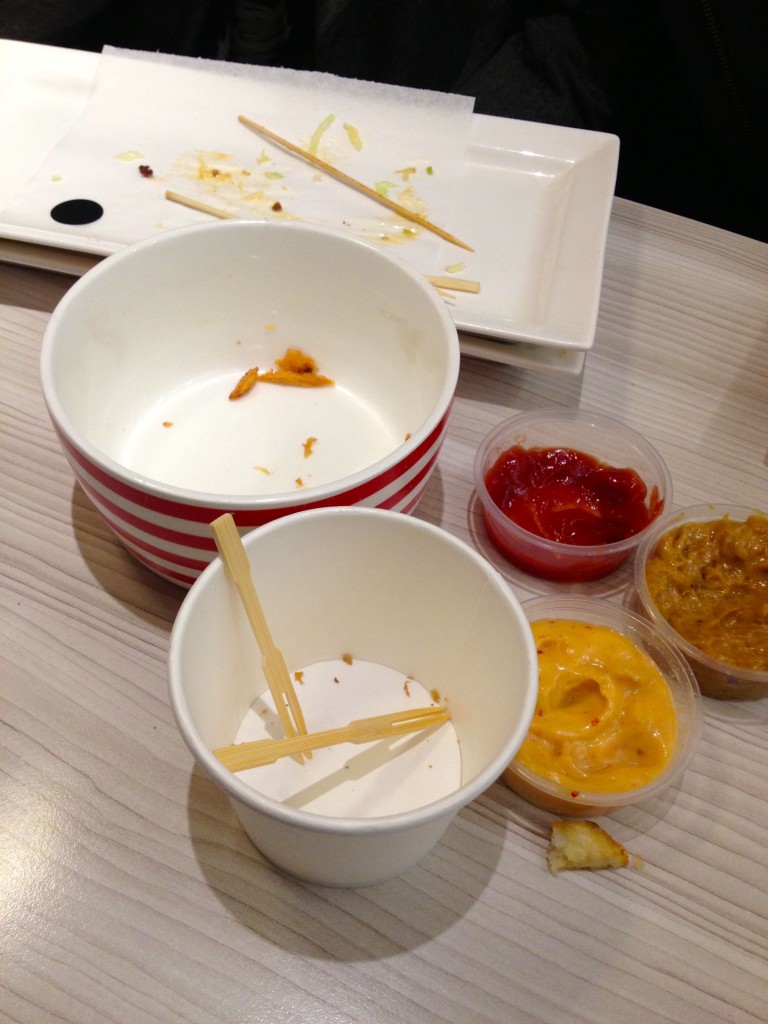 There was very little left other than some sauce (they are very generous serves!) by the time we were done with the food, which probably speaks for how much it was enjoyed. The term ‘pleasantly surprised’ was bandied around and one member of my party was even left feeling a little smug that we had eaten a delicious meal without the need to involve animals – a win for all involved!

Many of the burgers (and hot dogs, which we didn’t sample) are able to be gluten free and/or vegan which is excellent. There are also monthly specials on both the burger front and the sauce front, so there is always something new to try. Which is lucky as I think I will have to go back if not just to order my chips in a cone with some belgian mayo sauce and relieve my days living in the Netherlands!

Overall the evening was very enjoyable and I think it’s safe to say that won’t be the last visit to Lord of the Fries for any of us!

*We ate as guests of Lord of the Fries however this in no way impacted on our opinion of the food. Honesty only around here! For more information check out my disclosure policy

I Spy Plum Pie is Liz, an early 30s kiwi-born, Melbourne raised girl who is passionate about the environment and sustainability, food, exploring and learning new things. Join me on my journey to a happy, sustainable life!
June 18, 2013 by I Spy Plum Pie (admin) | 2 Comments

2 Comments on Review: Lord of the Fries