Yong Green Food is an vegetarian restaurant on Brunswick Street, Fitzroy that has been serving delicious vegetarian, vegan and raw food for many years. The menu includes curries, stir fries, noodles, burgers, wraps as well as some Mexican inspired dishes. The menu is really well marked to show which dishes are vegan, gluten free, organic etc, which I always find really helpful. The service is always prompt and friendly, and the food arrives quickly and full of flavour – so given all this it’s no surprise it’s such a popular place!

B and I visited together just before Christmas and were lucky enough to get a table when we arrived, as it filled up directly after us! As B was brought up vegetarian we decided to try some of the mock meat dishes on offer, as the idea of them is such a novelty for him. To begin with though, we went with a serve of the Summer Rolls ($12.50) which were veggies, smoked tofu and apple served in daikon slices, with a sweet mustard dressing. We really liked this dish, the contrast in textures was delicious, the tofu was lightly smoky (although could have been smokier and we wouldn’t have complained!) and the sauce was both tangy and sweet.

Our second entree was the Friend Nori Roll ($12.50) which was mung bean noodles, mixed with tofu, vegetables and sesame leaves, wrapped in nori and dipped in rice batter. They came served with yuzu citrus dipping sauce, and they were amazing. I try not to eat too much fried food, but if it all tasted like this I’d be in trouble! The outsides were crispy and the insides were full of flavour and perfectly cooked. In fact, my only criticism would be that they came in a set of three, so we had to share the third one! 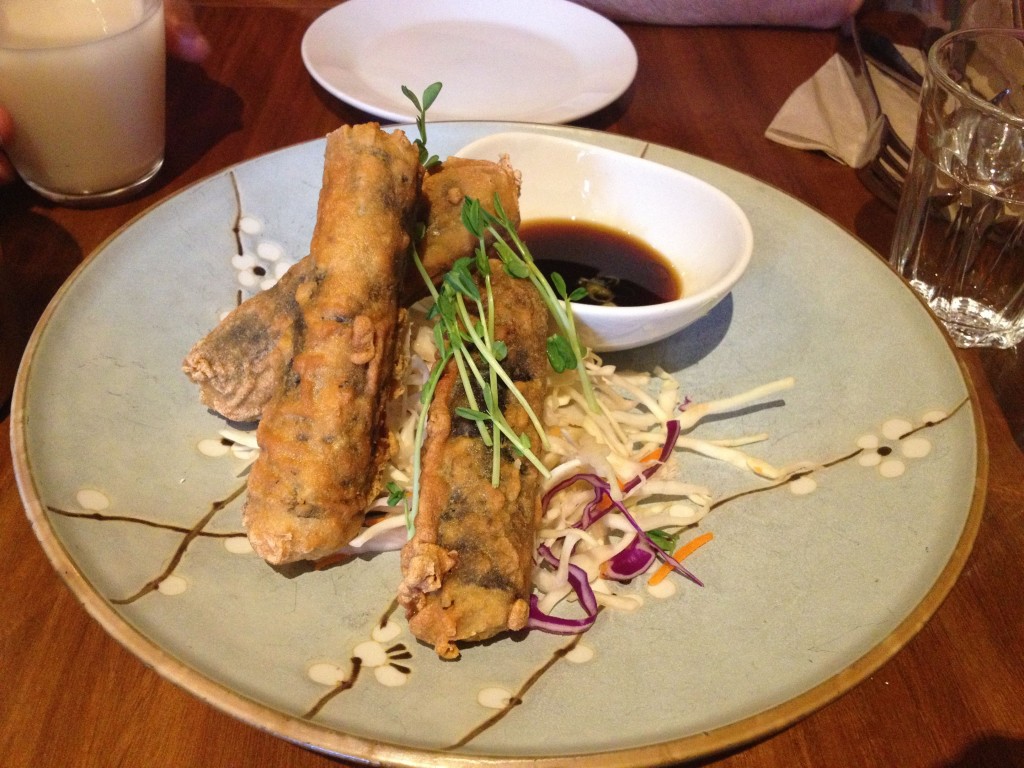 The first of our mains was the Teriyaki Chicken ($16.50) which was wheat chicken pan fried in teriyaki sauce and served with biodynamic brown rice and steamed veggies. We both really liked this dish, B particularly loved the sauce (and the amount of it!). I don’t think the texture is really how I remember chicken to be (it’s been a while though!) but that’s not necessarily a bad thing! The rice was particularly delicious, and whilst that might be an odd thing to comment on, it really was good! It was soft and had absorbed lots of the sauce so was flavoursome as well, perfect! 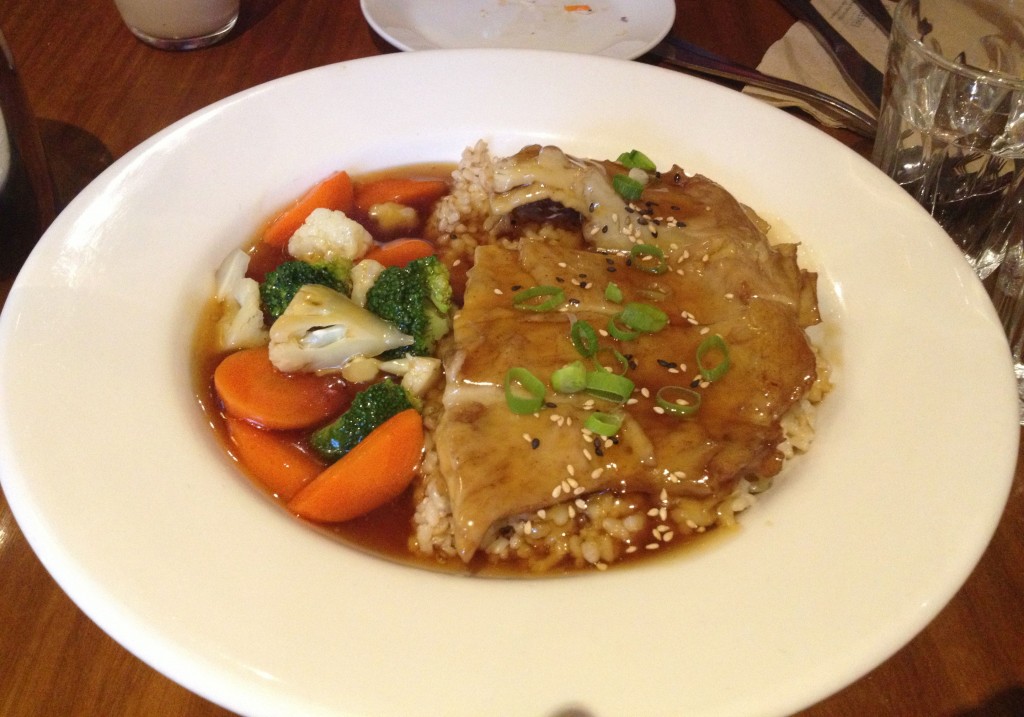 Our final dish of the night was the Korean BBQ ($17.50) which was sliced soy beef marinated in a soy marinade and served with biodynamic brown rice and kimchi. We weren’t really sure what to expect with this, as Korean BBQ wasn’t something I’d ever had back before I went vegetarian, but we were pleasantly surprised with this dish, it was really tasty. The ‘beef’ was a bit tougher than the chicken in the previous dish, but it was nicely marinated and provided some great texture to the meal. The kimchi was slightly spicy and provided a nice balance to the marinade of the beef. We weren’t expecting it to come with veggies as well, so that was a nice surprise! 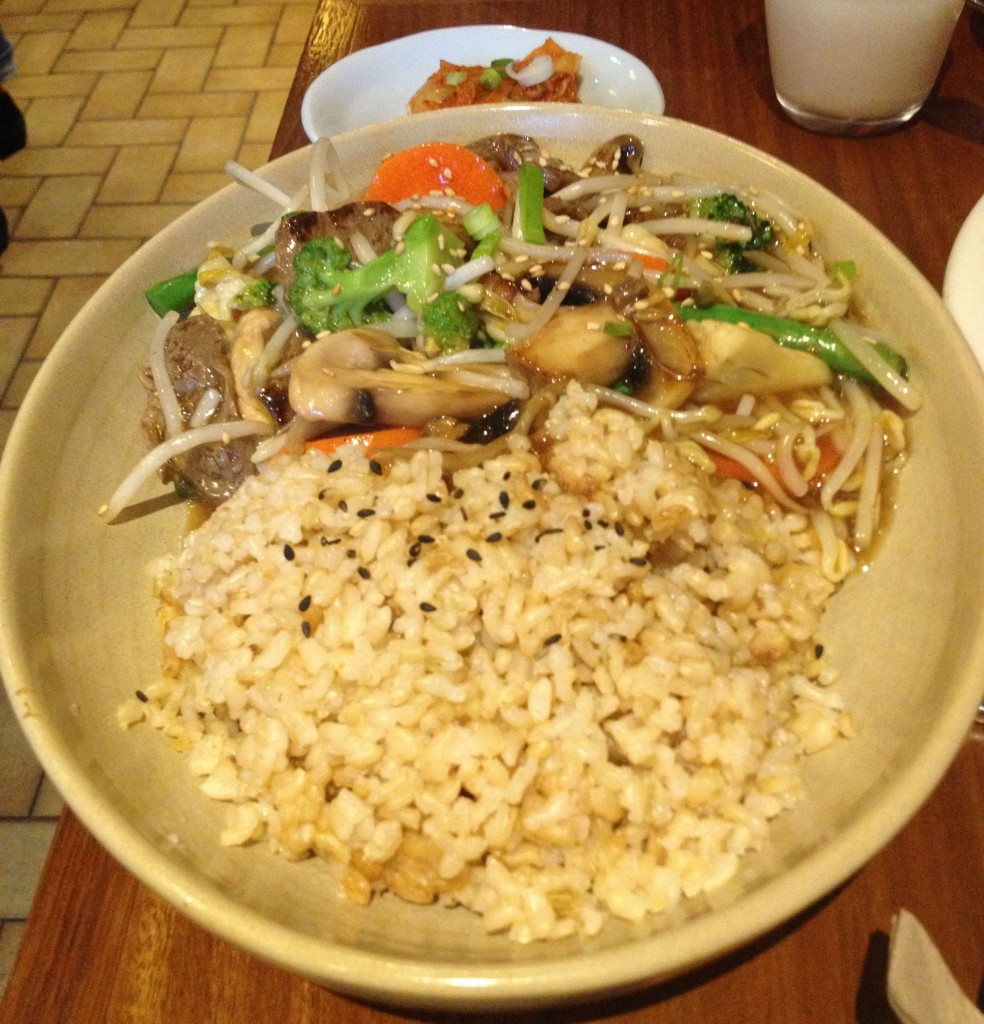 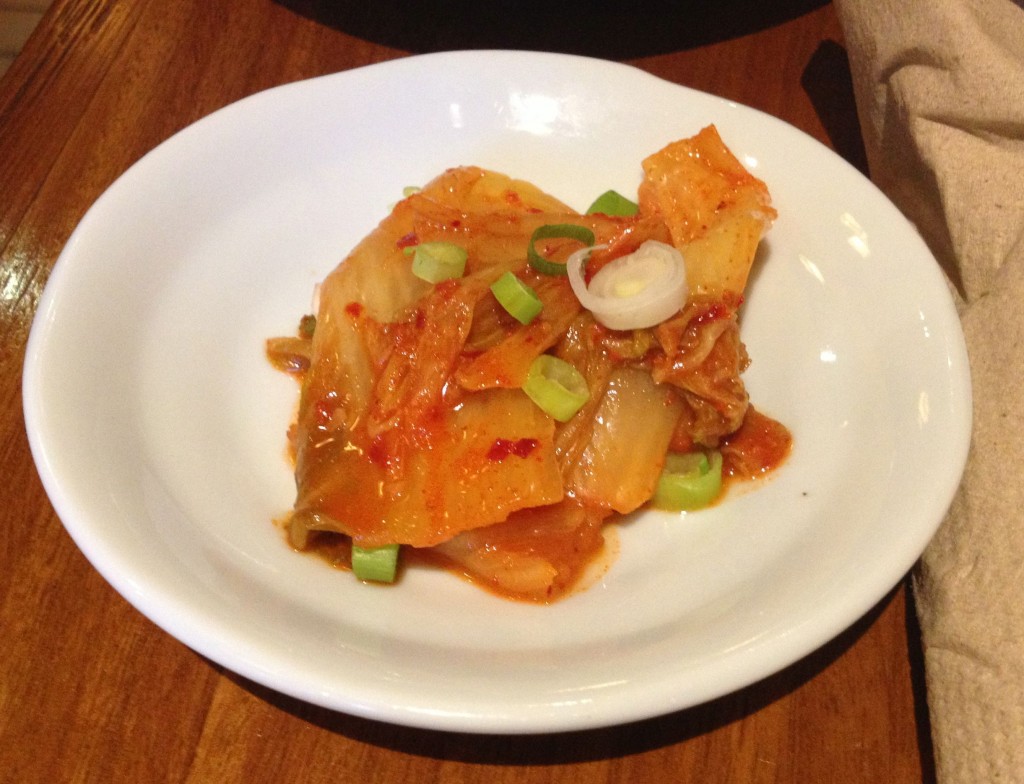 Overall we had a delicious meal, and there is still so much to go back and try next time! I’ll definitely be ordering the fried nori roll, that’s for sure!

I Spy Plum Pie is Liz, an early 30s kiwi-born, Melbourne raised girl who is passionate about the environment and sustainability, food, exploring and learning new things. Join me on my journey to a happy, sustainable life!
January 6, 2014 by I Spy Plum Pie (admin) | 2 Comments